"I haven't had sex since my girlfriend broke up with me two years ago," 27-year-old Tian Jun (pseudonym) told the Global Times. 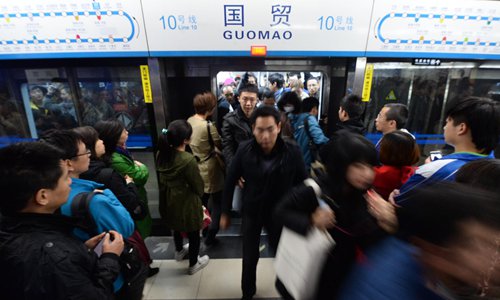 Commuters take Line 10 in Beijing. (Photos: VCG)
A 2013 graduate of one of China's top universities in Beijing, Tian has been working at a tech company as a programmer."I work from 9 am to 10 pm six days a week and barely have time to meet anyone," Tian said. Tian's story is typical among working-class Chinese between the ages of 20 and 40.According to a survey published in August by Chinese website 163.com, more than 50 percent of Chinese people under age 25 have no sexual experience.The survey asked more than 4,000 Chinese people born between the 1980s and the early 1990s about their sex lives.Another report conducted in 2017 by Maimai, a job-hunting website in China, showed that 47.1 percent of those with less than three years of work experience were virgins, and only 66 percent of working-class young people with three to five years of work experience had sexual experience.Cui Hao, a 26-year-old interior designer in Zhengzhou in Central China's Henan Province, told the Global Times that the reason he has no sex life is because he has no time to find a girlfriend since he travels around the country three days a week for work.Financial strainThe report also found a positive correlation between sex and money. People with higher incomes had more sex, and approximately 70 percent of those who had a monthly salary of more than 20,000 yuan ($2,898) had sex more than once a week.Yu Youting (pseudonym), mother of a 3-year-old girl, chose to relocate for a year to a first-tier city located a three-hour flight away from her home in a second-tier city in Northwest China."I haven't had sex since I relocated here without my husband and child," Yu told the Global Times. "My husband and I are both working class. Our salaries just make ends meet after paying the house mortgage and car loan each month, so the payment and subsidies here can help us save some money for our daughter's education." Peng Xiaohui, a sexology professor at Central China Normal University, believes that the lack of sex among the young workers is caused by the financial pressure the generation faces."Paying house mortgages and supporting parents have become a heavy load on China's young working class, which makes it harder for them to find a partner, since men nowadays have high standards for a woman's appearance, and women have strict requirements about a man's financial situation," said Peng."China is currently more open in terms of sexual ideology than several decades ago, so young people should have a more open attitude toward sex," said Peng. "However, financial and career pressure have made them adopt a moderately conservative attitude toward sex."Low satisfactionAccording to the survey by Maimai, more than 60 percent of respondents reported they are not satisfied with their sex lives.Peng said that the sexual satisfaction ratio (SSR) depends more on subjective perceptions, and there's no objective index to measure it. However, sexual anxiety caused by an unsatisfactory sex life might provoke interpersonal strain in the workplace and have an impact on their career development.According to Peng, SSR is an indicator of social harmony.Peng believes that one of the reasons for low SSR among China's young generation is excessive communication with strangers through social networking software, which is too random and fleeting. "There is no way that hookups can enhance SSR," said Peng."Sex with high SSR should be rooted in an intimate relationship in which the two parties are attached," added Peng.Peng considers sex a very important factor in social development, comparing society to a cart, with one wheel representing productive forces, and the other representing sex. It is these two "wheels" that push the development of human society.He suggested young people establish attachments with partners and engage in sex within these relationships. "This is the crucial factor, as strangers will never provide emotional attachments, much less enhance SSR," he said.