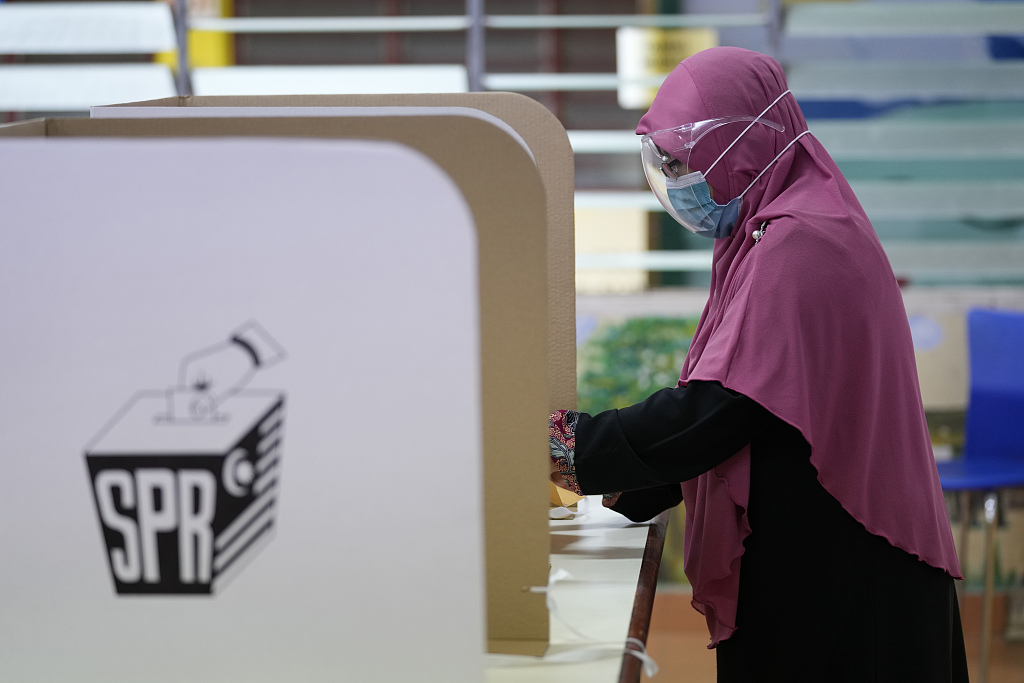 A woman casts her vote during a state election at a voting center in Malacca, Malaysia, November 20, 2021. /CFP

The coalition of Malaysian Prime Minister Ismail Sabri Yaakob on Saturday scored a crucial win in a state election seen as a test for the country's fractured political parties as they gear up for national polls that could be called by next year.

The Barisan Nasional (BN) coalition led by the United Malays National Organization (UMNO) won 21 of the 28 seats in the Malacca state on Saturday, granting it a two-thirds majority in the state assembly, according to the election commission.

The state election was triggered after several state assemblymen from the ruling coalition withdrew support for the state's chief minister, leading to the dissolution of the state assembly on October 5.

BN, which had governed Malaysia since the country's independence in 1957, lost the state and also lost control of the government for the first time after been defeated by the Pakatan Harapan (PH) coalition in the national and state polls in 2018.

Muhyiddin, who heads the Parti Pribumi Bersatu Malaysia (PPBM), had in turn resigned on August 16 before being succeeded by UMNO Vice President Ismail Sabri, who was sworn in on August 21.

Tensions between PPBM and BN had seen the federal political allies compete against each other at the state level along with the main opposition coalition PH, leading to multi-cornered fights in all state assembly seats, with other minor parties and independents also contesting.

The election has been seen as a test of whether UMNO-led BN could go alone in the coming national polls which must be held on or before July 2023.

Analysts have said the national polls could be called as early as the middle of next year, when a cooperation pact signed between the government and the opposition expires.

The pact, aimed at maintaining political stability while the country recovers from the COVID-19 pandemic, includes a promise by Ismail Sabri not to dissolve parliament before the end of July 2022.