CULTURE Man behind the meal

Man behind the meal

At 5 pm, when most city dwellers are about to head back home, Tao Zhiqi begins his work of the day. The 33-year-old man, who comes from Northwest China's Gansu Province, is one of millions of deliverymen in China. Among all businesses, the delivery industry, which includes both postal and food delivery, is one of the fastest developed in recent years. 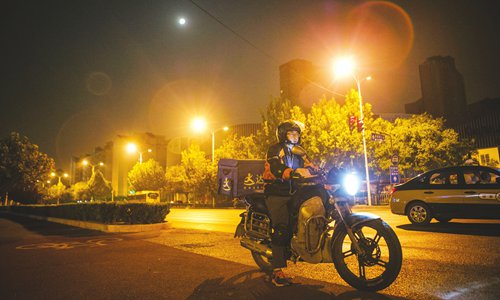 Tao Zhiqi on his motorcycle heading back home after a day's work at around 5 am. (Photos: Global Times)

On October 9, which was 49th annual World Post Day, Ma Shengjun, director of China's State Post Bureau, announced that in 2017, China's postal business had surged to 976.4 billion yuan ($141.1 billion), a year-on-year increase of 32 percent. Among that volume, express delivery handled over 40 billion parcels.

Food delivery is at a similar pace. In March of 2017, China Central Television broadcast a program called Data of the Survey of China Economic Life.The program stated that the big data on Meituan, a leading Chinese online delivery platform, showed that while the overall dining business in China rose by 10 percent in 2016, online dining surged by 300 percent, with a total sales volume of 130 billion yuan.

Behind all these exciting figures are deliverymen like Tao.

According to an August report released by China Business Network Data, along with the rising postal delivery business, the number of couriers jumped 50 percent between 2016 and 2018, putting the total national number at 3 million.

This group are often identified only by their company names, e.g. "the SF deliveryman" or "the Meituan guy," but behind their uniforms are stories just waiting to be told.

"I came to Beijing in 2015 and my first job was an EMS postal deliveryman," Tao told Metropolitan.

After working for over three years at EMS, Tao joined Dada-JD Daojia, an on-call city-wide delivery platform. Compared with his previous job, Tao said the new employer was more flexible, as he didn't need to go to the company every day, and could set his own schedule whether or not, and when, to accept an order.

Later he decided to become a nighttime deliveryman, working from 5 pm to 5 am.

"Because the roads are less crowded, so you won't have to waste time in a traffic jam," Tao explained to Metropolitan. 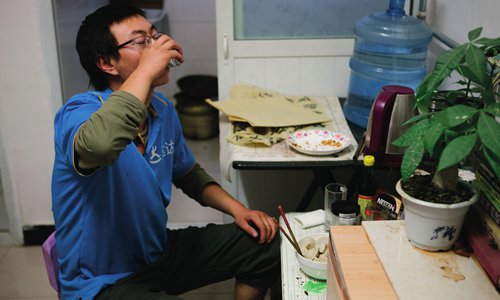 Tao eats his morning meal after a night's work.

The time one spends on a single delivery order matters a lot, for it influences how many orders one can accomplish in a day's work - and the total number of orders determines one's monthly salary. Meanwhile, if one delivers an order later than the customer was informed on the ordering platform, the delivery fee will be deducted from his salary and he may even receive negative comments, which can also result in deductions.

"Delivery fees for a single order are higher at night than in the day," Tao explained to Metropolitan."So I only take orders that are farther than eight kilometers away. The fuel consumption of my motorcycle is 0.15 yuan per kilometer. So a round trip [on this order] is 50 kilometers and costs me about 7.5 yuan. This order cost the customer 43.7 yuan, so I can roughly earn 35 yuan."

Tao finished the math in just a few seconds. Explaining how he is so quick at calculating, Tao said that he is good at math and even won math competitions when he was in school. "But I have a bad memory, which led to a serious leaning gap in my studies," Tao said of his school years.

In his rented room in Beijing, a book titled Mnemonics is one of many books piled up on his desk; a Chinese-language edition of Adam Smith's The Wealth of Nations was seen lying on his bed.

Tao described his work as dull.

"When I am not delivering things, I just sit aside the streets, playing on my mobile phone and waiting, for one to two hours," he said.

Tao started this job because of his younger brother, who used to work as a deliveryman for a dessert shop. After getting rheumatism, his brother quit and went back to their hometown. Tao was bequeathed all of his brother's left-behind delivery equipment, including a motorcycle, a helmet, a heavy jacket and a pair of knee pads.

"It is very important to wear knee pads, which I want to inform my fellow deliverymen," Tao emphasized. 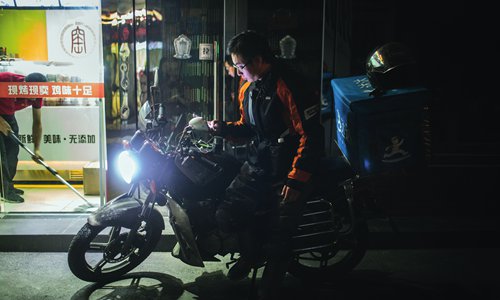 When there are no orders, sitting on his motorcycle and playing on his cellphone is how deliveryman Tao Zhiqi spends his free time waiting.

Summer nights are cool and pleasant in Beijing according to Tao, who often takes a nap in the open air by bending over on his motorcycle and resting his head on the handlebars. But as the autumn grows cooler, a shelter at night becomes crucial.

A fried chicken restaurant near Wangjing Subway Station (Line 14) is where Tao currently hangs out at night between deliveries. This is where he met Wang Liucheng, another deliveryman from Zhoukou, Central China's Henan Province. Twenty-nine-year-old Wang has been working as a deliveryman for four years.

"I chose this job because it has more freedom," Wang told Metropolitan. "So I can take care of my family as best as I can."

Wang works from 7 pm to 4 am. Different from Tao, he brought his family to Beijing with him. "I spend one day per week with my family," Wang said, explaining that he can still earn a gross monthly income of 8,000 yuan, which is about 6,000 yuan net. 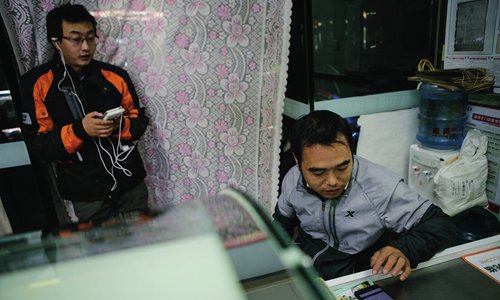 Wang Liucheng (right) checking a delivery order as he and Tao take shelter in a roast chicken restuarant in Wangjing, Chaoyang district.

However, Wang plans to leave this industry by the end of the year. "I am thinking about going back to Zhengzhou to run some beverage or snack chain stores," he told Metropolitan. "This delivery job cannot be a lifelong career."

Tao agrees, but he does not want to go back to his hometown. "I want to open my own restaurant in the future. The business sector is more mature in Beijing and the years here have broadened my vision and changed my way looking at things," said Tao, who has decided to bring his wife and daughter to Beijing.

Over the past four years in Beijing, Tao has moved five times and his monthly rent for a small apartment room has surged from 200 yuan to 1,200 yuan. The night he was interviewed by Metropolitan, he had just endured a traffic accident. But he still holds optimistic feelings about his life and his job. "If you decide to make a living in this city, you have to accept all these things," he said.