CULTURE Marginalized Chinese rappers making comebacks on and off stage

Marginalized Chinese rappers making comebacks on and off stage

For the past seven months, hip-hop and rappers almost completely disappeared from the small screen in the Chinese mainland due to a series of controversies surrounding their music. Once the center of the storm, some of these rappers are now trying to make a comeback - though not necessarily on stage. 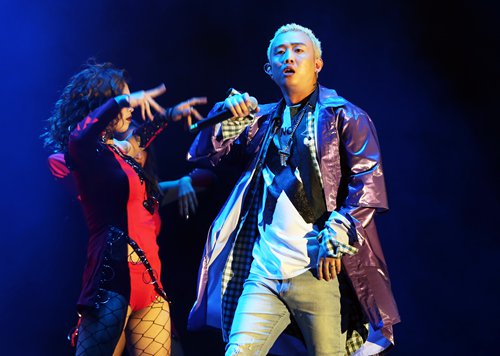 Eight months after his music was removed from Chinese streaming platforms due to accusations that his hip-hop song "Christmas Eve" insulted women and promoted drug use, PG One, one of the champions of the hit hip-hop competition show The Rap of China in 2017, once again became a hotly discussed topic due to the success of his online business.

DeeVan, the rapper's hip-hop clothing shop on Chinese e-commerce platform Taobao, secured sales of more than 2.6 million yuan ($380,000) in just half an hour after the first batch of the rapper's self-designed clothing line debuted on August 13.

The debut series featured a hoodie, a T-shirt and two caps in pink, white and black colors featuring the English words "I am not PG On1." Even though the cheapest of these cost more than 268 yuan, sales of each item averaged around the 1,000 mark on the second day.

PG One can be seen in several posters on the store's site posing as a model in the "I am not PG On1" hoodies - the store's best-selling item. Meanwhile, fans flooded Chinese social media platforms to post photos of their receipts to voice their support for the rapper.

The items quickly sold out and according to the site's customer service line, "The release date of the next series is still unknown."

On August 13, the store announced on Sina Weibo that 0.3 percent of each sale will be donated to a charity program that provides support for Chinese veterans who fought during the War of Resistance against Japanese Aggression (1931-45).

"Grateful for peace. We wish you can live peacefully and happily for the rest of your lives," the store wrote in the message.

"My idol is good-hearted," commented a fan under the post.

The rapper also released several hip-hop music posts on his WeChat account D1NOVO in early and mid-August, rapping messages with lyrics such as "I know you have been waiting for me anxiously for the past six months/ but please don't worry I am still the best me," and "I am the king/how could I give up/my music is not allowed to be released temporarily due to lawsuits," seemingly to explain his absence from the music scene.

Aside from PG One, Chinese rapper VAVA recently made waves overseas with the inclusion of her 2017 hip-hop song "My New Swag" in the soundtrack of Hollywood box-office hit Crazy Rich Asians.

A report from South China Morning Post even dubbed her the "Rihanna of China."

Seven months ago, the rapper filmed an appearance on mainland variety show Happy Camp but was cut from the final aired version of the episode through edits and use of special effects to cover her face, an action that many Chinese netizens suspected to be fallout from the negative press around hip-hop that started with PG One's "Christmas Eve."

Meanwhile, Gai, another rapper who made it big through The Rap of China but was abruptly removed from Chinese mainland singing show Singer in late January, is currently on a world tour.

With a concert in Hong Kong scheduled for this weekend, the rapper revealed in an interview with Chinese entertainment media platform Sina Entertainment on Monday that he will bring the tour to North America later this year.

The rapper told the platform that he "dreams of introducing his music to the world and communicating with international big-name rappers."

In the interview, Zhou also shared his feelings about his removal from Singer for the first time.

"Every field has its own rules and I respect all the arrangements made by my nation," said Zhou.

"Besides, it's natural to experience ups and downs in one's life."

Once a representative underground rapper from Southwest China who rapped about the life of local street rascals, Zhou recently released a new hip-hop single titled "Wanli Changcheng" (The Great Wall) in May.

"In this peaceful and flourishing era, there are so many good things to write about, why just focus on the dark side of society?" Zhou said.

Talking about his early works featuring local slang and stories about getting up to mischief, Zhou said "you aren't able to write songs like that after you start living the good life. It has something to do with your living environment."

"I appreciate and enjoy my current work and life," Zhou told Sina Entertainment.