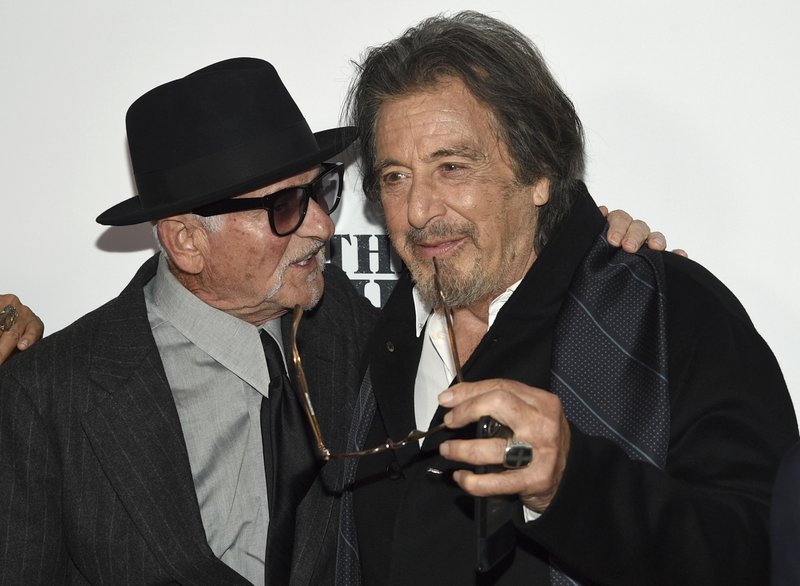 Joe Pesci, left, and Al Pacino speak as they attend the world premiere of "The Irishman" at Alice Tully Hall during the opening night of the 57th New York Film Festival on Friday, Sept. 27, 2019, in New York. (Photo : AP)

Though the film’s genre and cast, including Robert De Niro and Joe Pesci, has led some to expect a gangster thriller in the mold of “GoodFellas” or “Casino,” ″The Irishman” is a more reflective, less flashy rumination on morality, violence and American power. Through de-aging visual effects, the performances by De Niro, Pesci and Al Pacino span decades.

“The Irishman” was screened for members of the press Friday morning ahead of its evening red carpet premiere as the opening night gala for the New York Film Festival. The film’s debut has loomed like few other events on the film calendar, and a rare frenzy greeted it at Lincoln Center’s Alice Tully Hall. Reviews from critics were largely laudatory.

Variety called it “a coldly enthralling triumph” and “a stately, ominous, suck-in-your-breath summing up.” The Hollywood Reporter called the film’s length a weakness but still hailed “a sprawling gangland saga that’s by turns flinty, amusing and richly nostalgic.” The New York Times called it “a gift for cinephiles ... but also a somber acknowledgement of limitations.”

The film is also one of Netflix’s biggest bets yet. The streaming company plunked down $159 million to make “The Irishman” after other studios passed. Scorsese, speaking in a Q&A alongside cast and producers, said that Netflix was the only one willing to bankroll the movie.

“We couldn’t get backing for years,” Scorsese said. “It’s a costly experiment, but (Netflix chief content officer Ted Sarandos) and everyone at Netflix was like, ‘We’ll go with it.’”

Scorsese called his film “an interesting hybrid” as both something made for theaters and for watching at home. It will open theatrically Nov. 1 and begin streaming on Nov. 27.

“All of us now are in an extraordinary time of change,” Scorsese said. “But when it comes down to it, I felt — Bob (De Niro) felt — the picture had to be made for ourselves.”

Based on Charles Brandt’s book “I Heard You Paint Houses,” ″The Irishman” has been in development, on and off, for more than a decade. It stars De Niro as Frank Sheeran, a mafia hitman and high-ranking Teamster official. Shortly before his death, he confessed to killing Jimmy Hoffa (played by Pacino). Pesci plays the mob boss Russell Bufalino.

It’s a big statement for the 76-year-old director. Scorsese and his producers offered some impressive statistics on the movie’s scope: 108 days of shooting, 117 locations, 309 scenes.

The ambitious size of “The Irishman” is part of what scared away other studios, along with the expensive de-aging process used to make De Niro, Pesci and Pacino appear years younger in significant sections of the movie. Nine cameras were used to film those scenes.

Scorsese initially did a screen test and compared his digitally altered De Niro to the De Niro of “GoodFellas.” When the actor, 76, saw himself de-aged, he joked that he could extend his career another 30 years.

“It isn’t just about noses and computer imagery, it’s about posture, it’s about movement, it’s about clouding the eyes,” said Scorsese, noting that meant giving De Niro directions like reminding him that he had to stand up from a chair “like you’re 49.”

For many, the biggest excitement about “The Irishman” is seeing Scorsese and De Niro back together for the first time since 1995′s “Casino.” Pesci has acted only a handful of times in the two decades since “Lethal Weapon 4.” And even though many assume they’ve made numerous films together, this is Scorsese’s first movie with Pacino.