CULTURE Masks, superstitions and anti-virus videogames: how Chinese people react to the epidemic

Masks, superstitions and anti-virus videogames: how Chinese people react to the epidemic 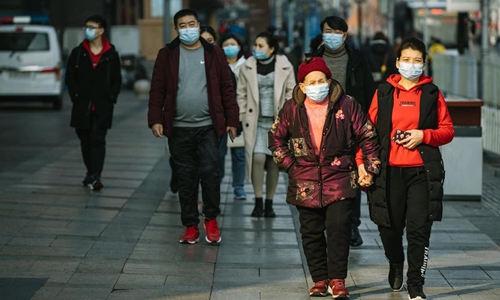 Visitors wearing masks walk along Wangfujing Street in Beijing on January 25 amid the outbreak of novel coronavirus in Wuhan. (Photo: Global Times)

They were the dirtiest curses I had ever heard from my grandma.

She is a 92-year-old woman living in a small county in East China's Shandong Province. She cannot read and does not watch TV news.

However, after the first dinner of the Year of Rat, she suddenly asked where the pneumonia we had been talking about came from.

I said it was caused by some people eating bats or snakes. She then burst out with impressive profanity.

Over the following days, every morning I would report to her about the novel coronavirus epidemic around China. She worried a lot and demanded our family members use stairs instead of elevators.

On the day I left my grandma's house, she solemnly declared nobody, except my aunt who takes care of her, should visit due to the spread of the virus.

My aunt posted this message for her twice in our family chatgroup on WeChat.

Meanwhile, my grandpa from my mother's side kept calling my mother and telling her to let me go back to Beijing, without visiting him.

After graduation, I could only meet my grandpa once or twice a year. But he prefers not to see me this time so that I could have fewer chances to be exposed to the virus.

This echoed a recently trending video on Weibo in which a man visited his grandfather before the Spring Festival but was stopped at the grandfather's door. The grandfather then threw out some lucky money and masks, packed in a plastic bag, to his grandson. "My grandpa does not want me anymore," the man said at the end of the video.

The video went viral and was played 60 million times. Many netizens approved of the grandfather's detached attitude, agreeing it was the correct way to avoid transmitting the virus.

Compared with senior generations, many of the middle-aged people hardly took to putting on face masks. Until very recently, some still felt everything was just a fuss.

It is even a consensus among the young net users, who share screenshots of WeChat, on which their parents refuse to wear masks and say "it's fine!"

"I didn't even wear a mask during SARS. I was in Beijing," my father announced.

Younger people in their 20s or 30s apparently are more concerned.

My cousins, who stayed indoors the whole holiday, had nothing much to do but follow the news about the coronavirus and share their worries in family WeChat group.

Even my three-year-old niece began to play a tablet game about coronavirus. Previously the game would allow the player to make a cupcake or popsicle step by step. But now, it tells kids to wear masks and to wash their hands properly through several processes.

"I saved a hedgehog when I was young," my grandma told me after the discussion on pneumonia. "The woman in my neighbor caught it and would feed it to her son who was sick. I secretly set it free."

In local superstition, hedgehogs are gods living on earth.

"It could bless you to live forever," I told my grandma.