Maybe the key word in NFL stretch drive is balance 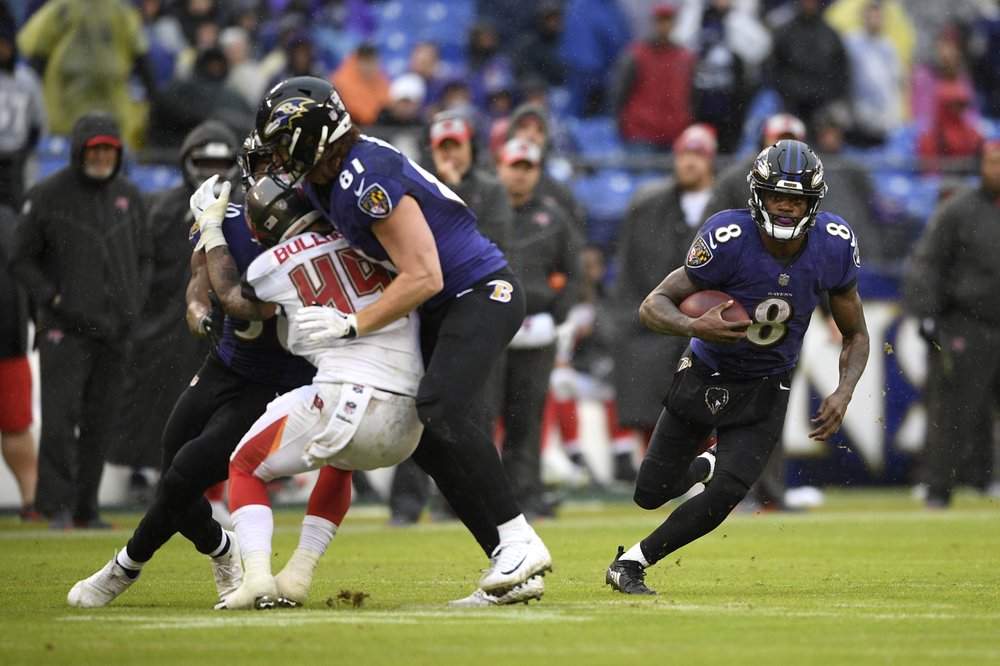 Baltimore Ravens quarterback Lamar Jackson (8) rushes the ball in the second half of an NFL football game against the Tampa Bay Buccaneers, Sunday, Dec. 16, 2018, in Baltimore. (Photo: AP)

Football purists are smiling. For one week, the video game nature of the NFL hit pause.

Only one quarterback on Saturday or Sunday threw for 300 yards, let alone 400. No pinball shootouts.

There were two shutouts!

Quite the reality check to learn that strong defense, an efficient ground game, and control of the clock still can win. Yes, some nasty weather in Baltimore and the New Jersey Meadowlands contributed to the lower number of points. We figure to see more of that over the final two weeks of the schedule; it is December, after all.

These developments, if they aren’t an aberration, could bode well for such teams as Baltimore, Chicago, Seattle — which actually was upset at San Francisco — and Dallas, which also lost, blanked at Indianapolis. They could be bad news for the high-scoring machines whose defenses are leaky, including previously considered powerhouses in Kansas City, New England and Pittsburgh.

“You’ve got to stay on the field on offense,” Ravens coach John Harbaugh said Sunday after a wet 20-12 victory against Tampa Bay. “If you do that, you have a chance to generate some points.”

And yards. Baltimore rushed for 242 of them on 49 attempts. Unheralded rookie Gus Edwards finished with 104. Jackson averaged 5.3 yards per rush and the Ravens are 4-1 since he replaced injured Joe Flacco as starter.

“He makes you play 11-on-11 football instead of 11 on 10,” Bucs coach Dirk Koetter said of Jackson, the 32nd overall pick in April’s draft. “We had him wrapped up a couple of times and he squirted out of there and was able to extend plays.”

Ah yes, 11-on-11 football. Not the flag football, 44-40 variety that excites fantasy fanatics, but the balanced game in which solid tackling, crunching blocks and a variety of strategies are paramount.

As the playoffs approach, the supersonic offenses could sputter. Teams primarily relying on them should know they might need to win man against man in the trenches, rule in a slugfest rather than in a points spree.

Of the division leaders, the Saints and possibly the Rams own that balance, though neither is as physical as, say, the Cowboys,Bears or Seahawks.

But the clubs unlikely to light up scoreboards also know if they can establish the tempo with their ground games and their stingy defenses — and an attitude that no opponent will intimidate them — they can be valid contenders in January.

Two of those clubs took a step backward on Sunday. Still, the Cowboys figure to win the NFC East and the Seahawks aren’t likely to blow a wild-card spot. Rather than panic after their defeats — Seattle’s loss against the lowly 49ers being the more problematic — they’ll go back to what they do best.

Because they have confidence in what they do best, which helped them turn around 2018 after slow starts.

“We didn’t give ourselves a chance,” Cowboys quarterback Dak Prescott said. “We weren’t scoring and so it wasn’t a complementary game of football. That’s what we’ve been playing these last five weeks and we didn’t do that tonight.”

Heading into December, the prevailing view was that a prolific offense was a necessity to win the NFL championship. People became enamored of the fireworks the Rams, Saints, Chiefs and Chargers could provide.

Now, with two weeks left in the schedule, it’s becoming clear that asymmetry isn’t such a great thing. Maybe some of the clubs who are showing they feature balanced game plans and approaches and talent — say Houston, Chicago, Indianapolis and the Chargers — should be reckoned with as much as New Orleans and Kansas City and the Rams.