CULTURE McIlroy revelling in living up to star billing

McIlroy revelling in living up to star billing 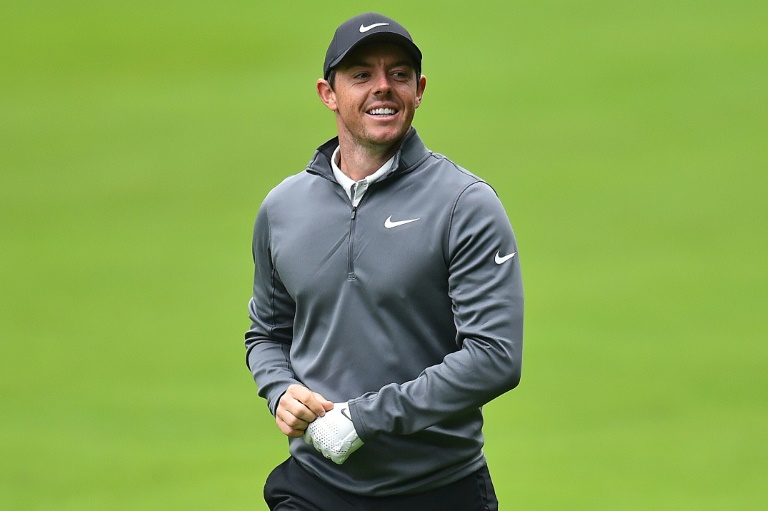 Northern Irish golf superstar Rory McIlroy is revelling in his star billing having taken the clubhouse lead after the second round of the PGA Championship at Wentworth on Friday.(Photo: AFP)

Northern Irish golf great Rory McIlroy says it is nice living up to his star billing after he shot a superb seven-under-par 65 in the second round of the PGA Championship at Wentworth on Friday.

The 29-year-old quadruple major winner is the clubhouse leader on 12-under and in prime position to add a second PGA crown to his win in the 2014 edition.

His bogey-free round -- only slightly blemished by failing to birdie either of the closing two par-five holes -- confirmed he has rediscovered his early season sparkle after a dip since a disappointing final round saw the one remaining major missing from his trophy cabinet, The Masters title, elude him again in April.

"It's nice to live up to the billing," said McIlroy.

"I played really well, to go bogey- free around here, I think I only missed one green, not by a lot.

"It was one of the best rounds of golf I've played this year, ball-striking-wise."

McIlroy has not enjoyed the best of fortunes at Wentworth, apart from in 2014 -- indeed he has missed the cut there four times.

But he made light of that past history, saying he had felt at ease with it the past two days.

"It hasn't really been the case around here for me the last few years, but yeah, my game feels good," he said.

"I just haven't played that well on it, so to get benign conditions the last couple of days and be able to take advantage of it has been nice."

'Started to pay off'

McIlroy, who revealed in January he had a slight heart defect provoked by a serious viral infection he had picked up in China in 2016, said one of the reasons he might be playing better at the tournament compared to previous years was he had rested up.

"I'm fresh coming in here, rather than there's been times where it's been like my third tournament in a row," he said.

"Obviously I just flew in from the States but it wasn't straight after a golf tournament.

"I had a week off to practise. I think that's got a little bit to do with it.

"But you know, I've done some good work over the last week and it's started to pay off."

McIlroy, who admitted binge-watching box sets of television series such as "Billions" the week after The Masters disappointment, said the only slight annoyance was not to have birdied either the 17th or 18th in the first two rounds.

"Yeah, I've made four pars there when I really should be making at least, you know, two birdies, but I played the other par fives well," he said.

"So it all balances itself out but I would to play those two holes a little better tomorrow."

However, McIlroy dismissed notions his rivals would be intimidated seeing him out in front.

"I have played two good rounds of golf and I need to play another two equally well," he said.

"I don't think anyone cares if my name is on top of the leaderboard."