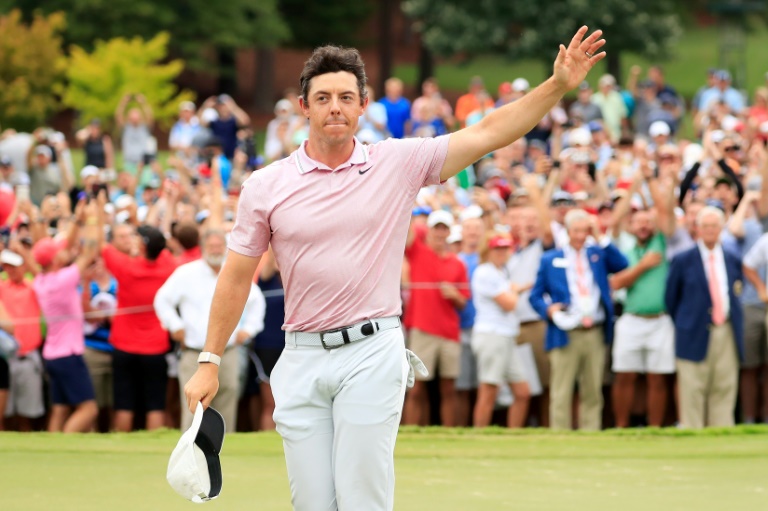 Rory McIlroy fired a four-under-par 66 to win the PGA Tour Championship and claim the $15 million FedEx Cup jackpot on Sunday.

Northern Ireland star McIlroy won the two titles for the second time following his win in 2016 after world number one Brooks Koepka suffered a final round collapse at Atlanta's East Lake Golf Course.

McIlroy finished the tournament on 18 under, four shots clear of Xander Schauffele, who posted a closing 70 to finish on 14 under.

McIlroy joins Tiger Woods as the only player to win the FedEx Cup playoff series twice.

For McIlroy it was sweet redemption following a disappointing showing in last year's Tour Championship, when he faded from contention with an error-strewn four-over-par 74 in the final round as Woods clinched a memorable victory.

"I didn't enjoy the walk up 18 last year. I played terribly, got myself into the final group, but I never took the fight to Tiger," McIlroy said.

"Going up against the No. 1 player in the world today (Koepka), he got one over on me in Memphis and I wanted to get some revenge today.

"To play like that alongside Brooks and get the win and win the FedEx Cup, it's awesome. It's amazing how different things can be in a year."

McIlroy, playing alongside Koepka in the final pairing, had started the final round one shot behind his partner.

Koepka had taken the lead earlier Sunday after the players returned to the course to complete the third round, which had been abandoned on Saturday after an electrical storm that injured six spectators.

Koepka finished the third round with a closing birdie for a two-under-par 68, edging one shot clear of McIlroy and Xander Schauffele at 15 under.

But Koepka's third round momentum didn't extend to the final.

After matching McIlroy with an early birdie on the sixth, the American's form deserted him with a double-bogey on the seventh while McIlroy snared his second birdie.

Although Koepka picked up a shot with a birdie on the eighth, a trio of bogeys on the 12th, 13th and 14th holes effectively ended his challenge.

McIlroy, who had birdied the 12th and 13th holes to move to four under for the day, gave the chasing pack hope after wobbling with bogeys on the 14th and 15th holes.

However McIlroy gathered himself brilliantly on the 17th, rolling in a 15ft birdie putt before going on to reach the greenside bunker in two on the par-five 18th.

He made no mistake with his birdie putt to finish with a flourish.

Koepka meanwhile had to settle for a share of third place, his two-over-par 72 leaving him alongside Justin Thomas on 13 under.

This year's PGA Tour Championship was played under a revamped "staggered start" format in which players had been spotted strokes based on their position in the playoff standings.

Thomas had started the tournament with a score of 10 under, two ahead of Patrick Cantlay on eight under and three clear of Koepka, who began on seven under.

McIlroy meanwhile started five shots off the lead on five under.