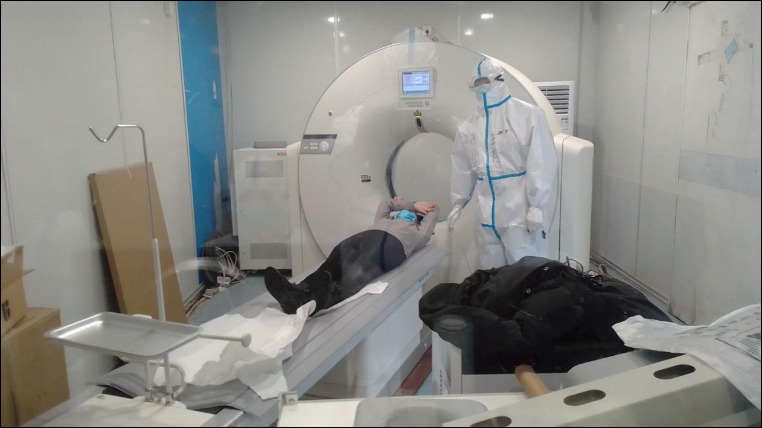 China has sent more than 30,000 medical workers from across the country to central China's Hubei Province, the epicenter of the COVID-19 outbreak, to relieve the local shortage of medical personnel.

Among them, a group of medical imaging technicians, who were mainly in charge of computed tomography (CT) scanning, one of the most important methods for the diagnosis of novel coronavirus infections, was dispatched from north China's Hebei Province to Wuhan City on February 22, reported China Central Television (CCTV).

They were later assigned to three temporary hospitals in the city.

Battling against the epidemic on the frontline, medical imaging technicians not only brave the risks of getting infected, but also bear the risks of radiation exposure that are 10 times more than the normal dose.

To shield themselves from any potential exposure to coronavirus and radiation, they need to wear two types of protective suits at the same time.

The radiation protection suit can weigh up to 15 kilograms, which puts great pressure on the shoulders and backs of medical workers who often have to wear them for hours.

Due to the rising number of infected cases in Wuhan, imaging technicians had to prolong their working hours to test as many patients as they could. Sometimes they needed to wear the gear for nearly eight hours.

For some female technicians in the team weighing less than 50 kilograms, this is a great physical challenge.

"suspected" of having the coronavirus. It can also detect the condition of confirmed cases and determine whether they are recovered, together with the nucleic acid test results, according to CCTV.

When the whole country joined together to fight against the epidemic, medical workers are those who rush to the frontline and risk their lives to rescue patients from the illness.

Nurses who conduct the throat testing are those in great danger of getting infected due to the massive exposure to the virus. Patients are very likely to cough when nurses collect their throat specimen and then spread the virus to them.

To reduce the risk, some Chinese developers are working on the research and development of a robot that can replace nurses in conducting the work, reported Xinhua News Agency.

For some critical patients who suffered from respiratory obstruction, doctors had to conduct endotracheal intubation to save their lives. However, it is a quite dangerous procedure for medical workers. The moment the patient's trachea is cut, a large amount of aerosol will be ejected, which will greatly increase the risk of getting infected.

Chinese health and epidemic prevention experts confimed that the novel coronavirus could be transmitted via aerosol, according to Zeng Qun, deputy head of Shanghai Civil Affairs Bureau.