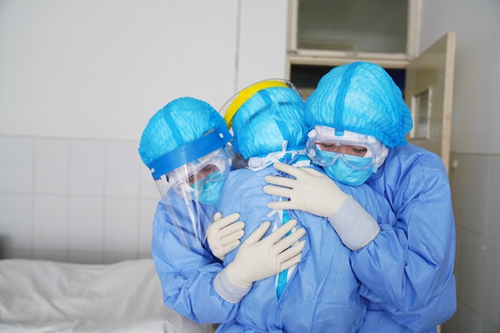 With the climbing numbers of infected patients and deaths, and the stricter measures to control the spread of novel coronavirus throughout the country, many people, especially patients and doctors fighting the virus on the frontline, are developing psychological problems.

China's National Health Commission issued a notice on February 2 to request local agencies launch hotlines to provide psychological support and consultation for the public during the fight against the epidemic, aiming to prevent and mitigate people's psychological problems and extreme behavior caused by these problems.

"The epidemic has become a psychological burden for a lot of medical staff and ordinary people, and we have attached great importance on it," said Yang Fude, president of the Beijing-based Huilongguan Hospital, a psychiatric hospital, according to a document the hospital sent to the Global Times.

Yang said that the previously accumulated experience and the national standard tells us that in psychological intervention, the first step is to categorize the group of people.

The thousands of confirmed novel coronavirus patients and the front-line medical staff are the most in need of psychological consultation. The second group includes those who are suspected of infection and those who had close contact with the infected patients. The third group is families of those confirmed or suspected patients, while the fourth group is the general public who are prone to panic and fear.

Liang Hong, deputy director of the psychological crisis intervention research center of Huilongguan Hospital said that most people who called for help show anxiety, fear and panic. Some were overwhelmed by the idea they might have been infected with the novel coronavirus because of some mild symptoms like coughs and headaches, Liang said.

"I am too nervous. I don't go outdoors at all because I'm afraid. What if I get sick?" a 39-year-old Shanghai woman, surnamed Pan, told the Global Times. Pan said she checks news from Weibo every day, feels panic and doesn't know what she can do.

The virus is highly contagious, and people feel panic because they don't know much about it, Wang Jikun, an associate professor of psychology of East China Normal University in Shanghai, told the Global Times.

It's important to seek out reliable news and not panic over "fake news" and "misinformation," Wang noted.

The best we can do is to follow the official voices and trust the experts who are making efforts to protect public health, Wang noted.

Liang suggests people get enough sleep, which helps build up resistance and eases anxiety. She also suggested the public make a timetable during home quarantine, sleep before 12 am, and stop or reduce smoking and alcohol consumption. Eating or drinking too much also contributes to anxiety.

"Do not be addicted to watching epidemic information all the time, do some indoor sports instead, such as yoga and aerobic gymnastics, which helps reduce anxiety," said Liang.

A mental health center based in Xi'an, capital of Northwest China's Shaanxi Province, added a special psychological consultation hotline for the public during the fight against the epidemic.

The free psychological consultation hotline was launched for the public in 2008 after an earthquake jolted Wenchuan county of Southwest China's Sichuan Province, which killed almost 70,000 people.

"A growing number of citizens started to call since January 20 after the epidemic was found in other provinces," a person in charge of the hotline surnamed Wu told the Global Times.

The mental health center soon trained its consultants on conversation tactics based on different groups of people such as medical staff, patients and their families, and others.

In the beginning, most people asked questions about the virus.

"We categorized people's questions and answered the questions on the social media platform," said Wu. "For the public, more knowledge on the disease means less fear toward it."

The frontline medical staff, social workers and road inspectors work in the extreme of their physical and psychological limit, so they deserve proper mental comfort, Yang said in a press conference held by the National Health Commission on February 3.

He suggests playing light music in their workplaces and giving them better relaxation during breaks. He also recommended medical staff vent their negative emotion in appropriate ways such as crying.

"It really feels refreshing after a big cry, like how a heavy rain rinses the cloudy sky," Yang said.

The professionalism of health care workers does not allow them to vent their negative emotions now, so their stress and trauma may not culminate until after the epidemic, when a higher level of psychological assistance is required.

"But we receive a few calls from frontline medical staff as they almost put all their focus on treatment at the moment. A few of them make phone calls only on their way home from work, for fear of adding psychological burden to their families," said Du Mingjun, executive secretary of Hubei Psychological Counselors Association.

Du suggests that in this current period, doctor-patient disputes are easy to be amplified, but it is not universal.

Substantial support from the government is very much needed to ease the psychological trauma of the patients' families and medical workers, Du appealed, suggesting media should not magnify negative issues or drive up public expectations so as to avoid exacerbating mass panic.

Zhang Jingsong gave her plan to go back home in Beijing from Shanghai during Spring Festival. After the coronavirus outbreak in Wuhan, she was busy with training professional therapists who can provide online services to the public.

"I'm in charge of a group of 300 clinical psychologists and psychiatrists who can provide professional advice to people, especially patients with the coronavirus, and close contacts and medical workers who are under huge pressure," Zhang, a psychiatrist from Xinhua Hospital affiliated to Shanghai Jiao Tong University School of Medicine, told the Global Times.

Under Zhang and her colleagues' instruction, these doctors will provide online services to people in need and train more therapists and volunteers.

On February 4, Zhang made a livestreamed speech to the public, teaching those "volunteers" including medical staff on how to keep mental health. A total of 140,000 people watched the video.

As a psychiatrist, Zhang admitted there are fewer patients going to the hospitals due to the coronavirus outbreak, but "the online demands for psychological help are growing dramatically."

Zhu Lin, who has six years' experience as a psychiatrist, organized a non-governmental team with 600 volunteers to provide psychological consultation for people bothered by the epidemic.

Zhu said compared with physical trauma, mental trauma heals slowly with the improvement of the environment and one's mentality. After the epidemic, there will be more people who need psychological intervention and remedies, The Beijing News reported.

Zhu started to organize volunteers on January 23 after she read news about the epidemic in Wuhan.

"As a psychiatrist, I felt panic and anxiety the first time," Zhu said. She established a chat group on WeChat and posted a statement on her social media platform, calling on her peers to "make a modest contribution" in providing psychological consultation for Wuhan people.

To her surprise, the team expanded so fast that more than 600 people have been in the team. Among them, 40 members are working overseas to provide 24-hour consultation.

More than 60 percent of Zhu's team members are certified psychological consultants, and the rest have worked in related areas.

Zhu received a call from a patient's younger brother for help. The patient was desperate after having a fever for 11 days, and started to prepare for his funeral. The team discussed some intervention plans to sooth him, hoping to improve his physical condition through improving his mood.

Zhu estimated that mental trauma will last three months after the epidemic is over.

There are still a lot of people who do not know the meaning of psychological support and wouldn't call for help, she warned. Zhu said she hopes her team could help more people and accompany them to get through this hard time.