Doreen Hynd performs tai chi chuan during an interview with the Chinese media on April 19 at the Chiryster Building in New York City. [PHOTO BY JUDY ZHU/CHINA DAILY]

Balance is a word that you'll hear often from Doreen Hynd, a 92-year-old tai chi chuan master who has taught the martial art for almost 30 years both in the US and Canada.

"Balance is everything. We all want to live as human beings with very fine balance in our emotions and how we present ourselves to the world," Hynd said in an interview with China Daily last month when discussing the benefits of practicing tai chi chuan, an externally soft but internally hard Chinese martial art practiced both for self-defense and health benefits.

On the 9th United Nations Chinese Language Day, held on April 20 every year, Hynd was bestowed with a special honor for her outstanding achievement in promoting tai chi culture.

"Tai chi has withstood the test of time for several centuries in Chinese culture. It brings about an awareness of breath and calmness and invites the body, mind and inner consciousness to work together for an experience of lightness and strength," Hynd said.

Born in Australia in 1925, Hynd began her tai chi chuan training in the 1980s at Sydney University. In 1984, Hynd moved to the United States and sought out Sophia Delza, who had spent many years in China studying under the famous tai chi chuan grandmaster Ma Yueh Liang - Ma was the senior disciple of Wu Jianquan, the founder of Wu-style tai chi chuan.

After Delza passed away in 1996, Hynd, by then Delza's teaching assistant, carried on Delza's mission of promoting tai chi culture and taught at places such as the United Nations, Carnegie Hall and the State University of New York.

"A lot of the classes that I am teaching are for retired people, and it was one of the most inspiring things in my life," Hynd said.

During her 24 years of teaching the art, miracles have happened, she said. Hynd recalled that one of her students who had suffered serious brain damage started to recover memories after practicing tai chi chuan with her, even though doctors said it was "impossible". 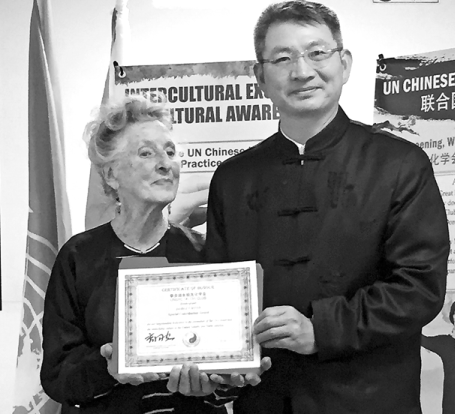 "They (the patients) learned about me through the college that I worked at in Canada, and they stayed with me and are still with me. Now the medical world wants to know what this Chinese exercise is doing with their patients," Hynd said with a big smile.

Hynd wants to pass on the magic to young people as well. "I volunteered to be a mentor in the high school as well as middle school and elementary school," she said. "They want me to teach tai chi chuan, and I am very thrilled about that."

Hynd believes it is important to speak to young adults, as they are inquiring about the world and are the future ambassadors for different cultures. "They are the ones who are going to lead the world, and it's really nice to have them embrace all cultures at a young age. To listen, to learn and to be open to all cultures," Hynd said.

The concept of tai chi ("supreme ultimate"), in contrast with wu chi ("without ultimate"), appears in both Taoist and Confucian philosophy, where it represents the fusion of yin and yang into a single ultimate, which is interchangeable, said Cao Guozhong, president of the UN Staff Recreation Council tai chi club.

"I would make a friend with the stranger who is coming toward me with a knife or a gun. My life might go, but I would rather have my connection with that person," Hynd said when asked whether she would use tai chi chuan to defend herself.

Cao said Hynd has learned the core of Chinese culture by practicing tai chi chuan. "To listen carefully to other people, to accommodate others with an empty heart, to transform enemies into friends... these are the essence of the Book of Changes (or I Ching, an ancient Chinese divination text)."

"Tai chi chuan is such a gift. I am a little bit lost for the best kind of language that I could be using for appreciation for what I inherited. That's where my good health comes from. I am 92, and I can do dancing and tennis and whatever it might be," Hynd said.