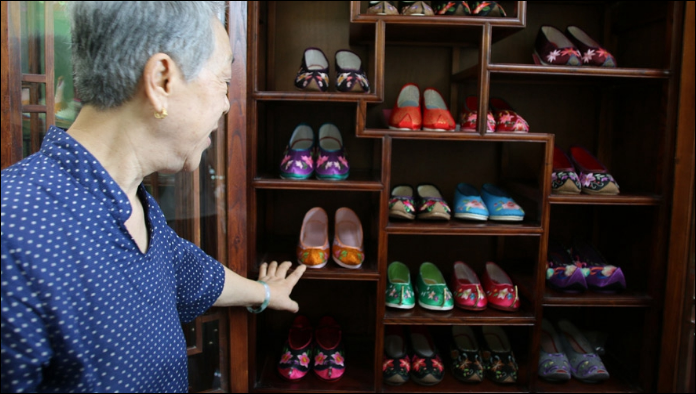 Ten enthusiasts of traditional Chinese embroidery are lucky enough to have a chance of working under the guidance of shoemaking master Wang Guanqin in Beijing.

Participants in the intangible cultural heritage experience program Great Seed learn at the feet of inheritors or masters and from hands-on experience.

During their encounter with the 79-year-old Wang on July 21, the participants were fascinated with the embroidered shoes. They tried to make the soles and uppers of the shoes themselves under her professional guidance and learned about the cultural connotation and history of making embroidered shoes.

"I've always been crazy about embroidered shoemaking, but there are few people who could do this kind of craft nowadays. For me, it's a great chance to learn," said Cheng Guiqi, a student majoring in directing at Beijing Union University.

According to Wang, her enthusiasm for the craft came from her family's longtime affinity with the sophisticated technique developed by her great-grandmother generation.

Unlike embroidered shoes sold on the market, which are made by machine, Wang insists on designing and making shoes with her own hands.

"Each of my shoes is like a daughter," Wang said. "It's never about just making a pair of shoes. It's the cultural connotations that make each shoe unique and precious."

Her inspiration for different designs is often drawn from historical research based on Chinese literature and ancient culture. One fine example is her famous series of shoes featuring the animals of the Chinese zodiac.

For the ox, niu in the Chinese language, the embroidery features morning glories, pronounced as qianniu hua in Mandarin. She uses grass and flowers for the horse and carrot flowers for the rabbit.

"Pigs made by machines often appear in an exaggerated way, but mine are happy pigs. No matter what angle, the pigs seem to be smiling," Wang said.

"Shoes are soulless without a cultural connotation," said Wang, who has done detailed research through continuous studies that manifest the culture of shoes in different dynasties throughout Chinese history.

In 2007, Wang's handmade embroidered shoes and her skills were included on Beijing's Intangible Cultural Heritage list. She is said to be the premier figure in Chinese embroidered shoemaking.

Her shoes have become precious gifts for special occasions, such as weddings, or been acquired.

Through June 9, 2019, 1,000 people around the world will connect with 1,000 inheritors for an in-depth experience with different forms of intangible cultural heritages.