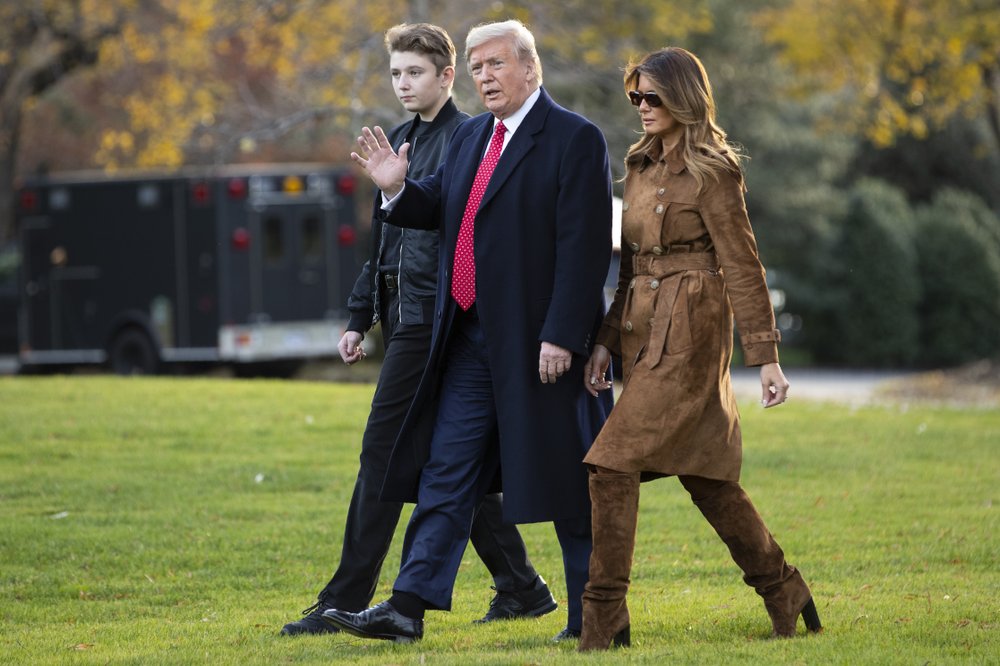 In this Nov. 26, 2019, file photo, President Donald, first lady Melania Trump, and Barron Trump, walk to board Marine One on the South Lawn of the White House, in Washington. (Photo: AP)

Hillary Clinton spent the morning of her husband’s impeachment visiting Capitol Hill to rally Democrats to his side. Pat Nixon kept assuring reporters her husband wouldn’t quit — right up until he did. Eliza Johnson, frail from tuberculosis, kept watch over her husband during his impeachment while sitting in a room across from his White House office.

Melania Trump, just the fourth first lady forced to grapple with the threat of her husband’s impeachment, is pressing on through the ordeal silently, showing no inclination to speak out publicly on behalf of her spouse.

While her husband recently broke his own record on daily tweets and delivered his longest-ever rally speech as he was being impeached, the first lady has largely held her tongue — with the exception of a sharp tweet scolding a law professor who invoked 13-year-old Barron’s Trump name during an impeachment hearing.

“Like every first lady, she’s sort of trying to forge her own path through this,” said Tammy Vigil, a Boston University communications professor and author of a book about Melania Trump and Michelle Obama. “In this particular case, she doesn’t really have a whole lot of history to look toward.”

Melania Trump has said in the past that the president is the one the public needs to hear from since he was the one elected.

And while the president has complained about the “great damage and hurt” the impeachment process has “inflicted upon wonderful and loving members of my family,” the first lady’s spokeswoman rejected the idea that Mrs. Trump has been somehow wounded.

“As always, Mrs. Trump is focused on being a mother and wife, and is busy serving our great nation,” said Stephanie Grisham, her spokeswoman. “She is very strong, and after many years now, has become used to political harassment.”

Trump is only the third US president to be impeached, accused of pressuring Ukraine’s leader to investigate Trump’s political rivals as he withheld security aid approved by Congress. Trump is also accused of obstructing House efforts to investigate the matter.

The president, who insists he did nothing wrong, is unlikely to be removed from office by the Republican-controlled Senate.

A private person by nature, Melania Trump has rarely clued the public in on her thoughts, even as she weathered other difficult moments in her husband’s presidency, including the special counsel’s two-year investigation into possible collusion between Trump’s presidential campaign and Russia.

Mrs. Trump also stayed silent after a former Playboy model and an adult film actress went public with claims of having extramarital affairs with Trump before he was president. Trump has denied having the relationships.

She has followed the same pattern during impeachment.

The first lady made her first solo visit to the Capitol in October on the same day that a group of House Republicans caused a ruckus by trying to barge into a secure briefing room where three committees were hearing depositions in the case against Trump.

Instead of canceling the appearance, she proceeded to mark the anniversary of legislation the president signed to help reduce opioid use, one of her signature issues.

As she departed after the event, the first lady ignored shouted questions about how impeachment was affecting her family.

Shortly after House Speaker Nancy Pelosi announced the beginning of a formal impeachment inquiry in late September, Melania Trump flew alone to Wyoming and spent two days promoting national parks and spending time in the outdoors for her “Be Best” youth initiative.

She has participated in numerous events since then in Washington and around the country: traveling to South Carolina with Karen Pence, the wife of Vice President Mike Pence, receiving the official White House Christmas tree and accompanying the embattled president to London, among them.

Amid the impeachment debate, she and the president also welcomed scores of lawmakers and other guests to White House Christmas receptions.

The two other presidents to be impeached, Andrew Johnson in 1868 and Bill Clinton in 1998, were both acquitted after trials in the Senate. Richard Nixon resigned before the House could vote to impeach him over the Watergate scandal.

Up until Nixon resigned, Pat Nixon would tell reporters that her husband wouldn’t quit, said Mary C. Brennan, author of a biography about the late first lady.

“So much of her identity was tied up with his political career, so him quitting is like her quitting and that’s not something that she would have done,” said Brennan, dean of the history department at Texas State.

Pat Nixon often answered questions by saying she only knew what she read in the newspapers.

″My mother’s greatest regret in the aftermath of Watergate was that my father did not consult her about the tapes before their existence became common knowledge,″ Julie Nixon Eisenhower wrote about her mother. ″She would have urged that they be destroyed forthwith.″

And at some point, Mrs. Nixon began scaling back her public appearances because “people were yelling questions to her about impeachment” everywhere she went, added Myra Gutin, who studies first ladies at Rider University in New Jersey.

Eliza Johnson stayed on top of her husband’s impeachment, the byproduct of a post-Civil War clash with Congress. She closely read stories from a variety of newspapers and preserved them in scrapbooks, according to the National First Ladies’ Library. She is said to have always believed he would be acquitted and was overtaken with emotion when she learned the verdict.

Hillary Clinton was active in her husband’s defense in a case that revolved around his sexual relationship with a White House intern.

On the morning of the House vote in December 1998, she made a rare foray to the Capitol to privately rally Democrats. She joined the president and congressional Democrats for an appearance in the White House Rose Garden later that day after Clinton was impeached.

Hillary Clinton also used an unrelated White House appearance on the eve of the House vote to urge the nation to “practice reconciliation” and “end divisiveness.”