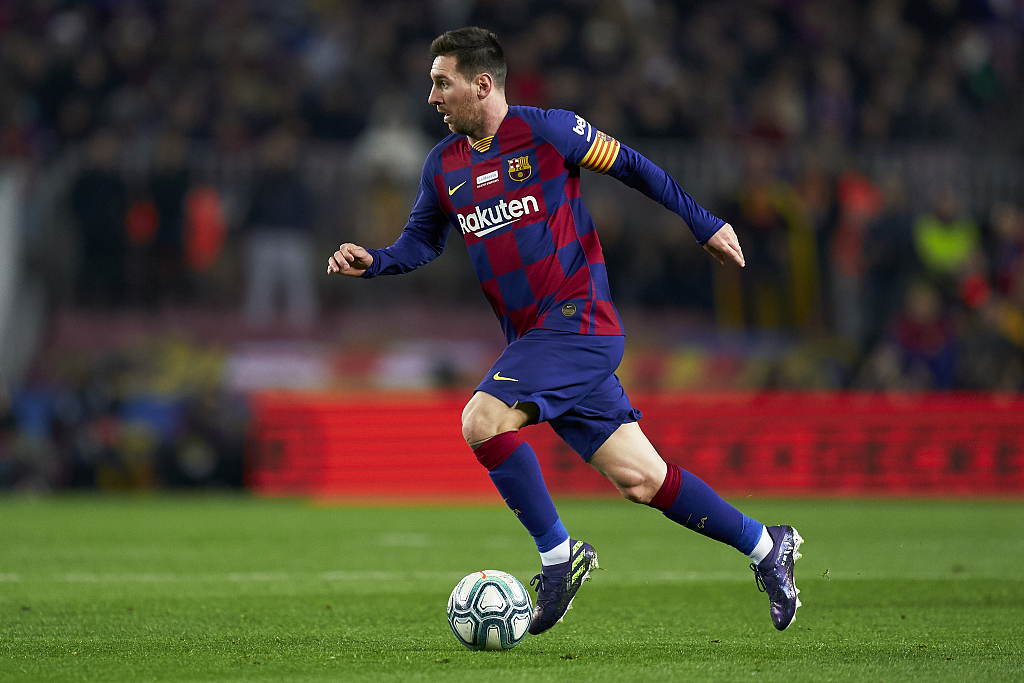 Lionel Messi of FC Barcelona runs with the ball during the La Liga match between FC Barcelona and RCD Mallorca at Camp Nou on December 07, 2019 in Barcelona, Spain. (Photos: VCG)

Lionel Messi broke yet another record by hitting his 35th La Liga hat-trick on Saturday as Barcelona thrashed Real Mallorca 5-2 to keep pace with Real Madrid at the top of the table.

"I knew I had a little gap, my last resort was to try a backheel," said Suarez.

"I was surprised," added Barcelona coach Ernesto Valverde. "It was an extraordinary goal."

But at the end of a week in which Messi claimed a record sixth Ballon d'Or, it was the Argentinian etching his name into the history books again after pulling clear of Cristiano Ronaldo's 34 La Liga trebles to stand alone.

"Unbelievable," said Valverde. "It was a celebration of the Ballon d'Or." 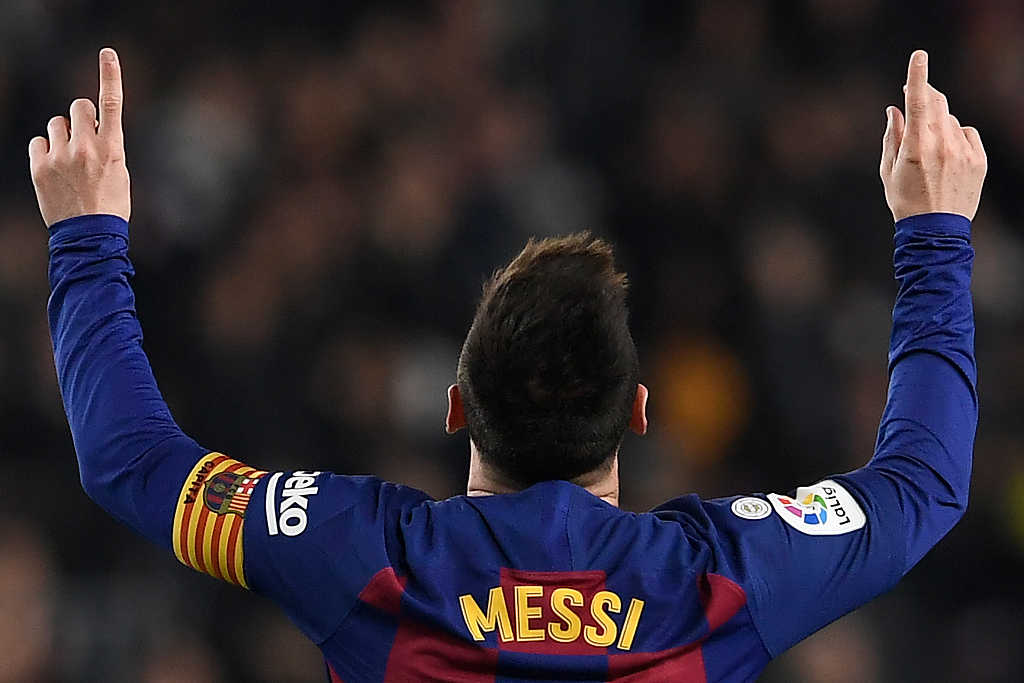 Lionel Messi celebrates after scoring his team's second goal during the Spanish League football match between FC Barcelona and RCD Mallorca at the Camp Nou stadium in Barcelona on December 7, 2019.

The efforts of Messi and Suarez overshadowed Antoine Griezmann's opener but that was impressive too, the Frenchman applying a sumptuous chip after being assisted by his own goalkeeper Marc-Andre ter Stegen.

An exhibition of creativity at Camp Nou allowed for the occasional lapse in defence and Mallorca's Ante Budimir twice reduced the deficit to 2-1 and 4-2, even if a comeback never looked likely.

Instead, Messi underlined his status as the world's finest footballer with another sublime performance, instant evidence for why he was presented with his latest Ballon d'Or trophy on the pitch before kick-off.

Messi now has 12 goals this season, the highest in the division and one ahead of Real Madrid's Karim Benzema, who had scored one and set up another in an equally comfortable 2-0 victory over Espanyol a few hours earlier.

It means Madrid and Barcelona are back level on points at the top of the table, with Barca ahead on goal difference. Sevilla, in third, are four points further back.

Benzema's own irresistible form in parallel with Messi adds an intriguing sub-plot to the upcoming Clasico on December 18, which looks increasingly likely to decide who will sit first over the Christmas break.

"We're talking about Karim a lot recently, in a good way," said Madrid coach Zinedine Zidane. "He's getting older and that's made a difference, his maturity.

After rocky starts, La Liga's most successful two clubs also appear to be hitting their stride ahead of what is shaping up to be a crunch meeting in 11 days' time.

Messi in this mood will be hard to stop. For his first goal, he cut in from the right and bent the ball into the top left-hand corner and his second was almost a carbon copy, Suarez setting it back for his partner to hit the same spot.

In between, Budimir latched onto an excellent reverse pass by Salva Sevilla to briefly give Mallorca hope after Griezmann had opened the scoring, racing onto Ter Stegen's through ball and scooping it over Manolo Reina. 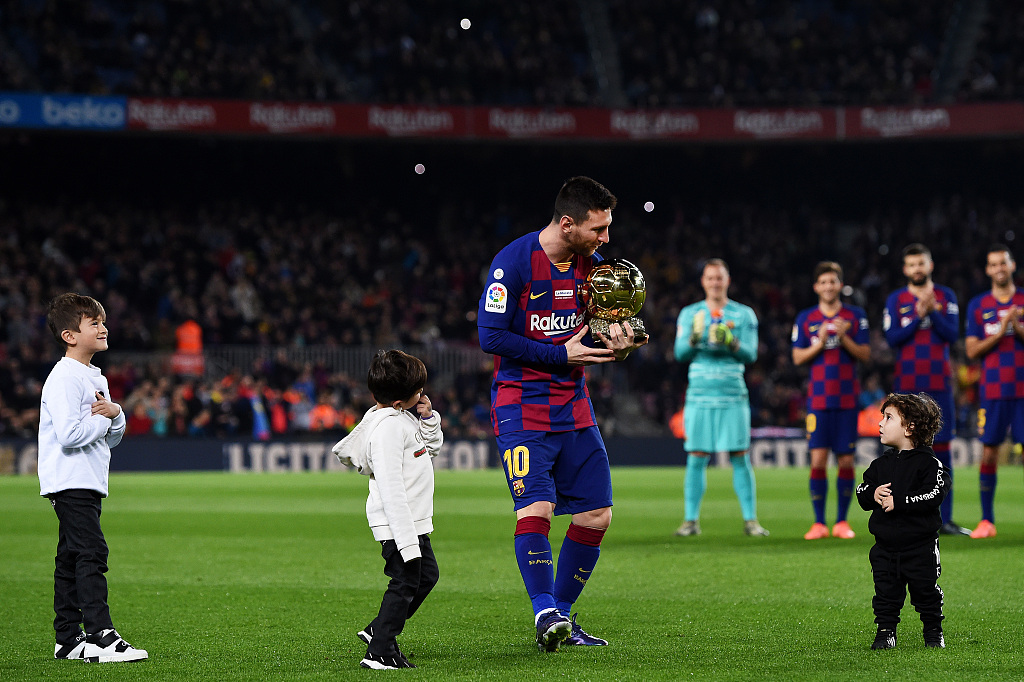 Suarez hit the post and then stumbled after skipping around Reina but he made up for both two minutes before half-time with arguably the goal of the night.

Ten passes, involving seven different players, ended with Suarez with his back to goal and somehow the Uruguayan dug out a superb shot with the back of his foot that span into the far corner. Frenkie de Jong had been instrumental in the build-up.

Budimir capitalised on a rare Ter Stegen error to head in before Messi completed his hat-trick with seven minutes left. Sergi Roberto pulled back for Suarez, who set it up for Messi. His shot clipped the crossbar on its way in.

Earlier, Benzema gave the assist to his compatriot Raphael Varane before scoring his 15th goal of the season.

Varane's goal came in the 37th minute after Benzema had bundled through on the edge of the box. With his left foot, Varane stabbed into the far corner.

Vinicius Junior, lively on his first start since October 19, might have made it two after tearing away on the break but he failed to beat Diego Lopez at his near post.

Benzema also missed from a Vinicius cross but finally got his goal with 11 minutes left. He threaded in Fede Valverde with a smart reverse pass and then continued his run, before meeting the pull-back and finding the corner.