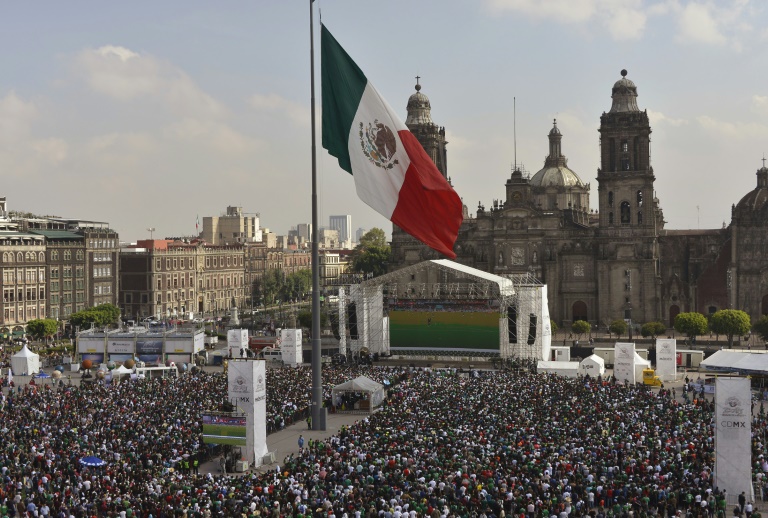 Mexico will face Brazil in the Wolrd Cup just hours after the results of Sunday's presidential election are due (Photo: AFP)

Whoever wins Mexico's presidential election Sunday will have to vie for attention with a formidable rival, one that can either stoke the victory party or stamp it out: football in Russia.

Just hours after the winner of the presidential race is expected to be known, Mexico will face Brazil in the last 16 of the World Cup, giving the country yet another contest to watch on tenterhooks.

Both the election and the knockout match in the Russian city of Samara could mark a new chapter for the world's most populous Spanish-speaking country.

In Sunday's vote, the heavy favorite is the fiery leftist Andres Manuel Lopez Obrador, who looks poised to oust the two parties that have governed Mexico for nearly a century, and who promises a "radical" change in course.

In Monday's match, the heavy favorites are the five-time champions Brazil, who are lead by the world's most expensive player, Neymar.

But the Mexicans are daring to hope for the best, after upsetting Germany in their opening match and helping send the reigning champs packing in the group stage.

"The social mood is very positive right now thanks to Mexico's performance at the World Cup," said professor Aurelio Collado Torres of the Monterrey Institute of Technology.

Will football influence politics? Will politics influence football, or at any rate the reaction to it? Collado Torres thinks it is possible.

He said optimism over the national team "could translate into a larger vote for Lopez Obrador," who has generated a groundswell of support from poor and working-class Mexicans.

Once every 12 years, the World Cup and Mexico's presidential elections coincide.

"Ever time, the question arises over the relative importance of each," said Felix Fernandez Christileb, a former goalkeeper for the Mexican national team who is now a TV commentator and presenter for Univision Deportes.

"We Mexicans know what's trivial and what's important. Politics is getting less and less trivial, and football is getting more and more important," he joked.

Many Mexicans are holding their breath, for one contest or both.

That is the case for Miguel Diaz, a 52-year-old sales clerk who has been rooting for two-time presidential runner-up Lopez Obrador to win the presidency for years.

He is a football fan, too, but argues that a Lopez Obrador victory over his top rivals -- Ricardo Anaya of the conservative National Action Party (PAN) and Jose Antonio Meade of the ruling Institutional Revolutionary Party (PRI) -- would be the more important event.

"The football match is one day, the political outcome will last six years," Diaz said.

"A victory for Andres Manuel Lopez Obrador is the most important thing that could happen to Mexico.

"People have no idea what's going to happen in this country. They think a leftist president can save Mexico," said a 56-year-old man, declining to give his name, as he purchased US dollars at a Mexico City exchange house.

He wanted a safe currency, he said, because he fears what could happen after the elections.

Still, he was finding time to focus on football.

"The World Cup is a religion, there's nothing more important," he said.

Politics and football also intertwined on Wednesday, the last day of the campaign and Mexico's final group stage match.

Hours after Mexico made it through to the last 16 -- despite losing 3-0 to Sweden that day -- Lopez Obrador held his final campaign rally in one of the legendary venues of Mexican football: Azteca stadium.

"We're going to win, but our victory has to be overwhelming," he shouted to tens of thousands of cheering supporters, standing near the spot where Argentine legend Diego Maradona scored his infamous "hand of God" goal against England in the 1986 World Cup.

But nothing is ever certain, in politics or football.

"What's worrying is that if Lopez Obrador and Mexico both lose, we're going to have a lot of problems in this country," said Collado Torres.