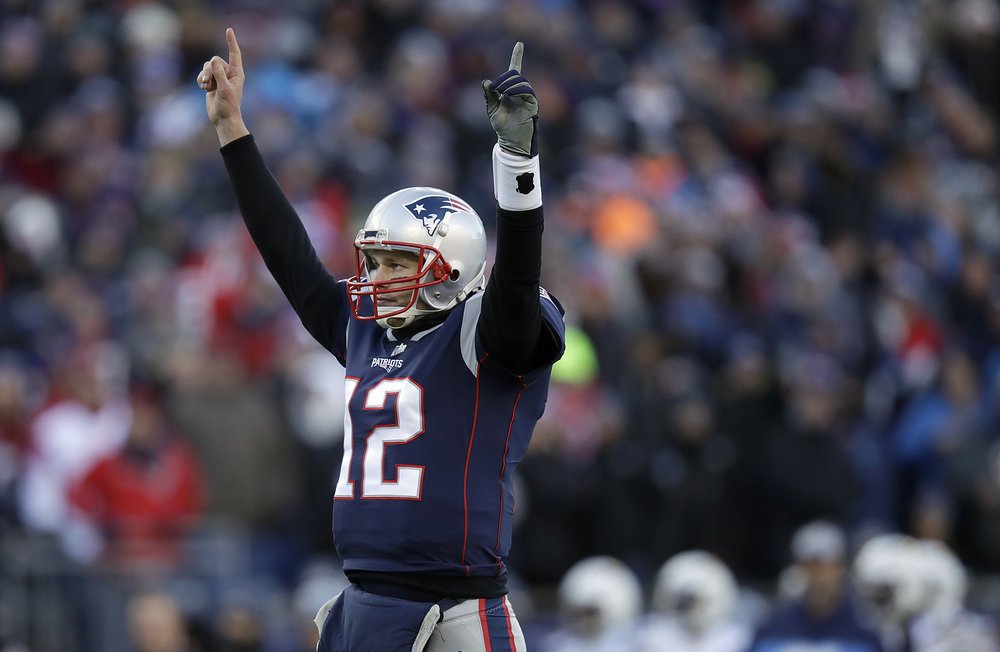 Sony Michel ran for 129 yards and had three touchdowns and the New England Patriots beat the Los Angeles Chargers 41-28 in the divisional playoffs on Sunday to earn their eighth straight trip to the AFC championship game.

New England (12-5) will play at Kansas City in next week’s AFC title game. The Patriots beat the Chiefs 43-40 in Foxborough in Week 6. The Patriots finished 9-0 at home this season.

It is the 13th conference championship game appearance by the Patriots during the Tom Brady-Bill Belichick era.

“It’s going to be a good game,” Brady said of the rematch with the Chiefs. “They’re a good team. We played them earlier this year. I know everybody thinks we suck and, you know, we can’t win any games, so we’ll see. It’ll be fun.” 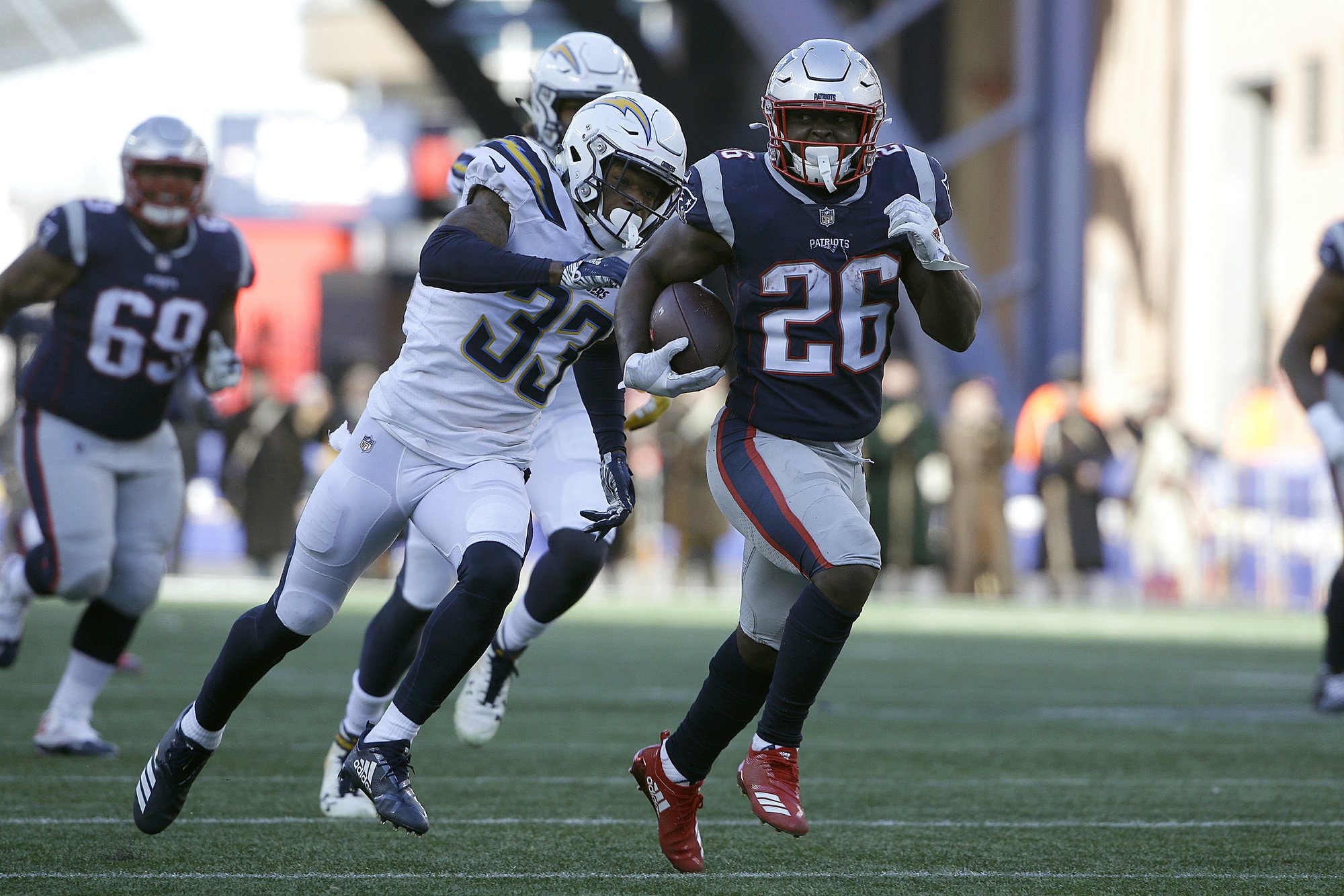 Quarterback Philip Rivers finished 25 of 51 for 331 yards, three touchdowns and an interception. He is 0-5 in games played in Foxborough, including 0-3 in the postseason.

Brady finished 34 of 44 for 343 yards and a touchdown. He improves to 8-0 as a starter against Rivers, who drops to 1-8 against New England all-time.

New England scored on its first four possessions of the game to build a 35-7 halftime lead. 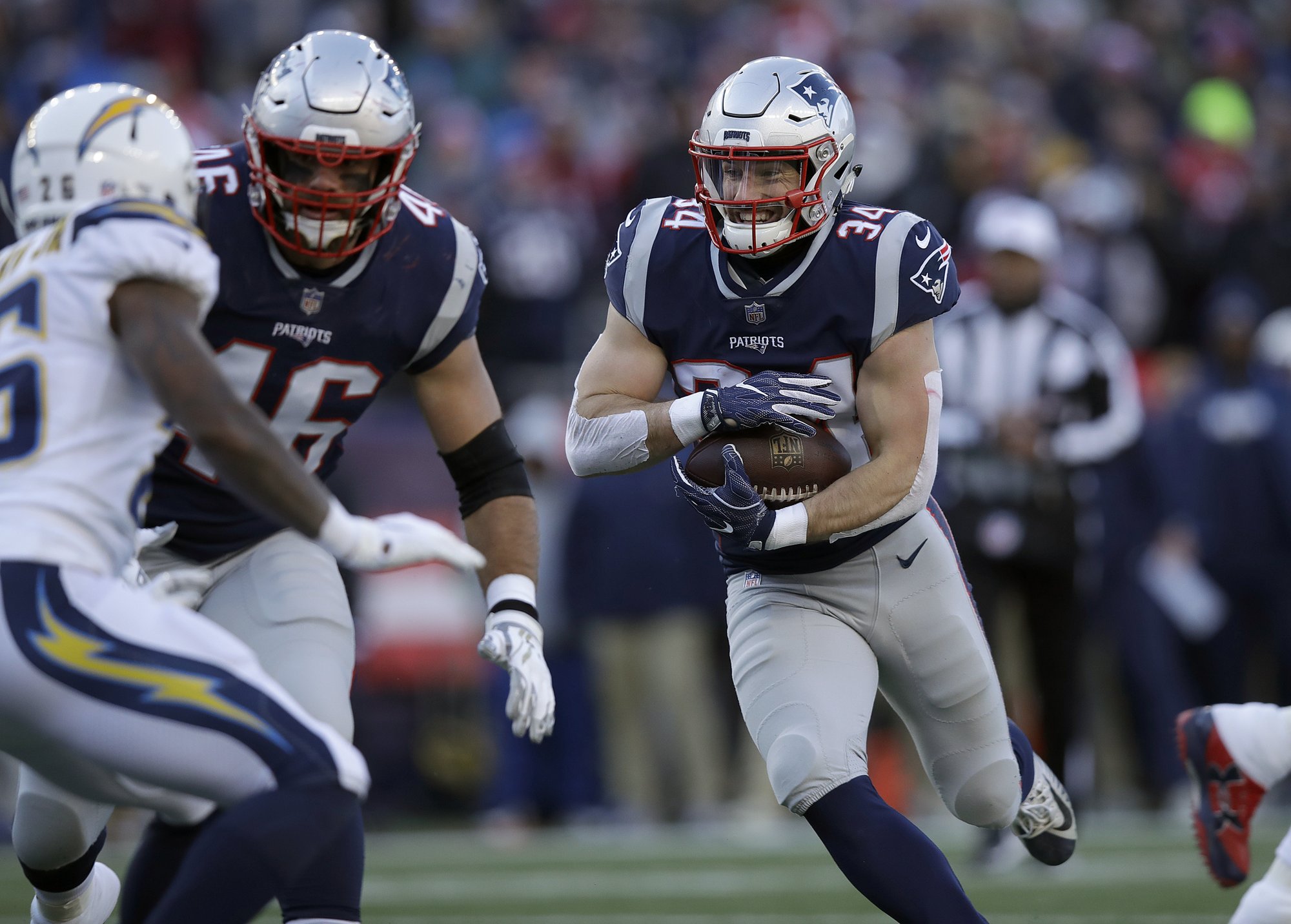 New England Patriots running back Rex Burkhead runs toward the goal line for a touchdown against the Los Angeles Chargers during the first half of an NFL divisional playoff football game, Sunday, January 13, 2019, in Foxborough, Massachusetts. (Photo: AP)

The Chargers added three touchdowns in the second half, but it was much too late.

Los Angeles lost for just the second time on the road (8-2) and first time outside Los Angeles this season. In its past four trips to the playoffs, Los Angeles has lost in the divisional round.

“We dug ourselves a hole in the first half,” Chargers coach Anthony Lynn said. “One game doesn’t define where we are as a football team.”

Rivers seemed poised to keep Los Angeles in the game, connecting with Keenan Allen for a 43-yard score on Los Angeles’ first offensive possession. It was the longest touchdown of Allen’s career, including the postseason.

It turned out to be just a blip. The Chargers punted the four other times they had the ball in the first half. 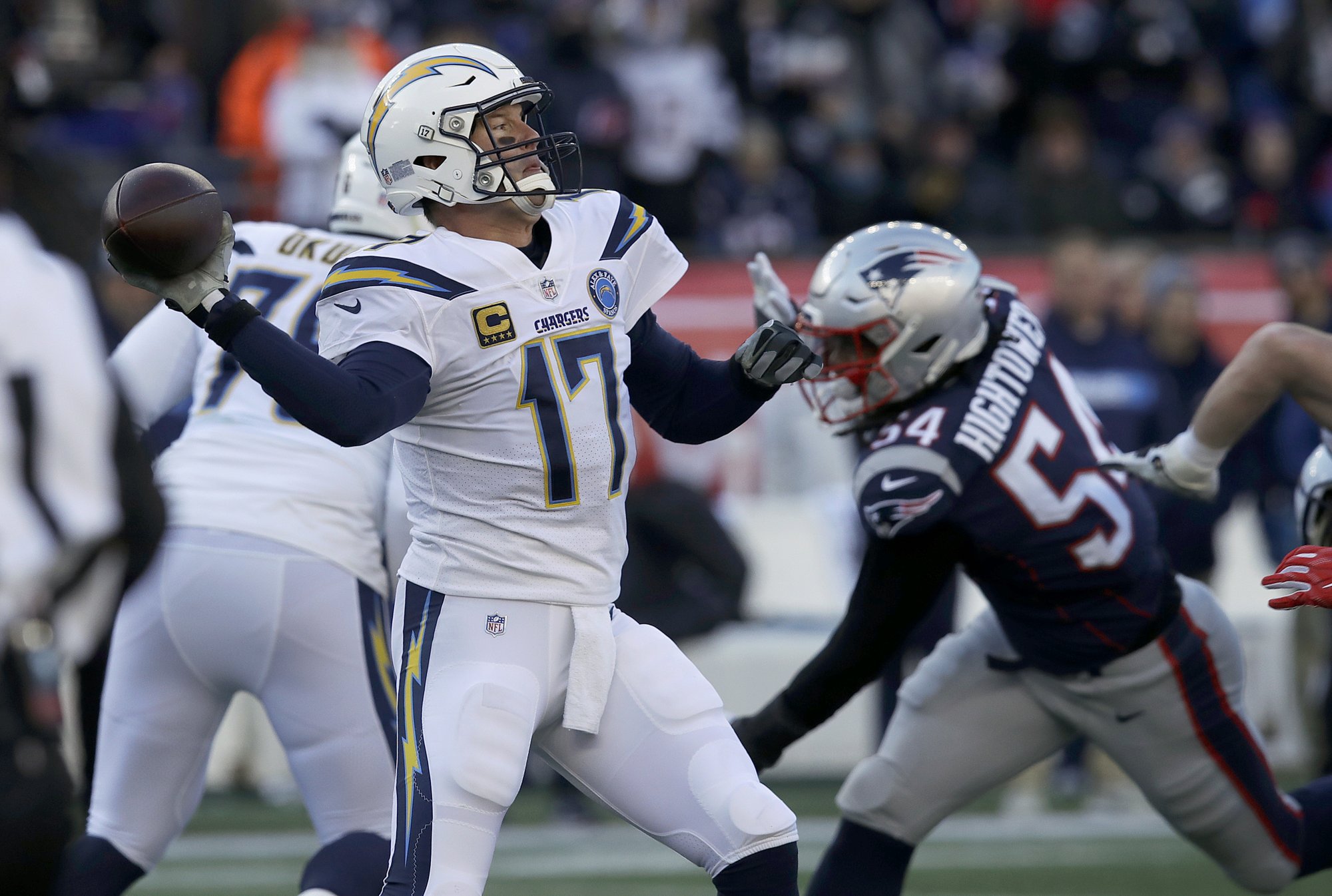 The Patriots were efficient throughout the opening 30 minutes, going 5 for 5 in the red zone, 5 of 6 on third down and committing only one penalty.

New England didn’t go three-and-out for the first time until its fifth offensive touch of the day when it punted with 3:32 left in the second quarter.

But Ryan Allen’s 48-yard punt was fumbled by Desmond King , sending the ball rolling toward the sideline. The referees ruled the ball went out of bounds before New England’s Albert McClellan appeared to recover it. But the play was reversed after a challenge by Bill Belichick.

The turnover proved costly, with the Patriots scoring just four plays later when Michel crossed the goal line from 5 yards for his third touchdown of the half.

Michel carried 16 times for 105 yards in the first half.

He set the tone early, scoring from 1 yard on the opening possession of the game. It capped a 14-play, 83-yard drive in which he rushed five times for 15 yards and had a 9-yard reception. 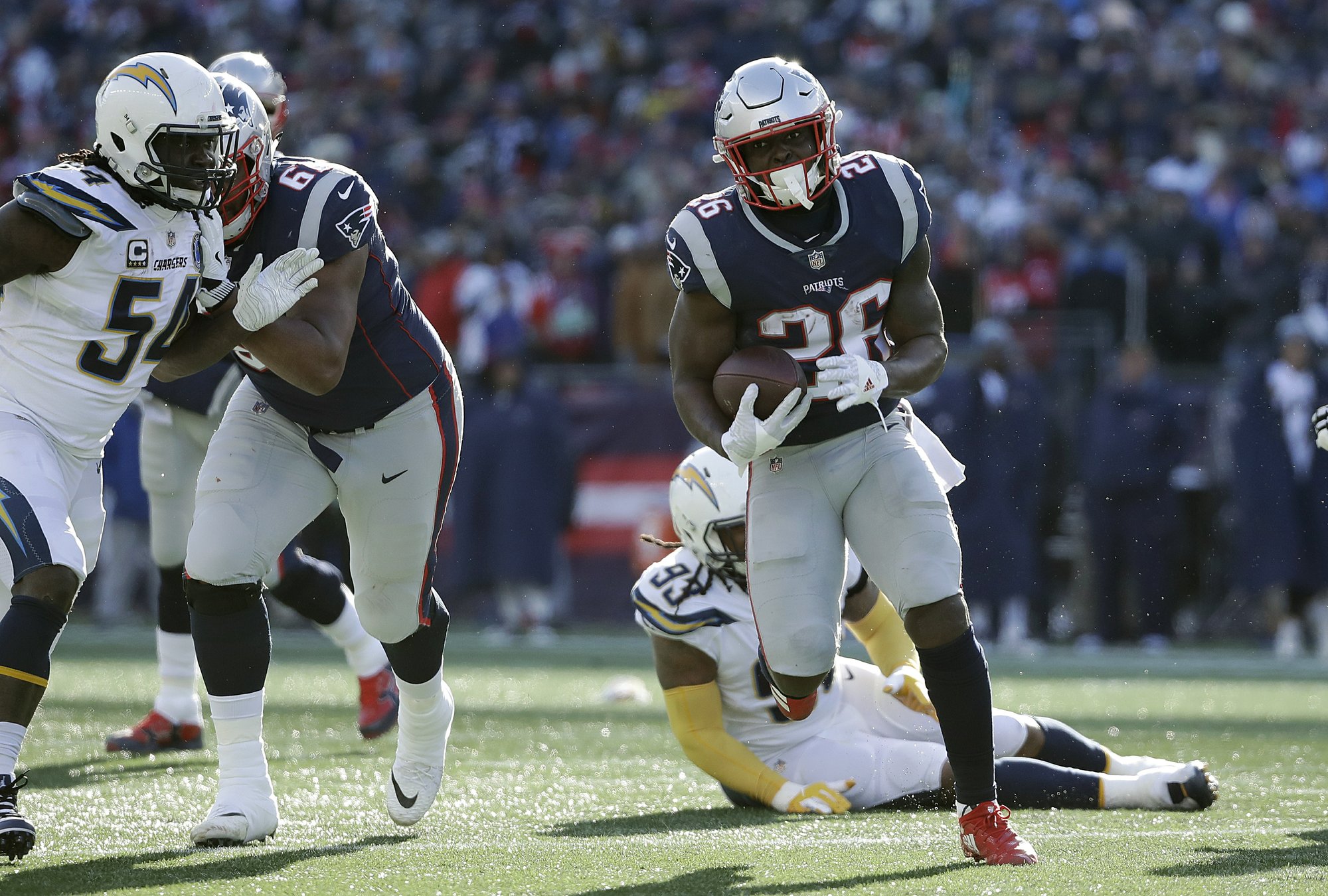 New England Patriots running back Sony Michel heads for the goal line and his second touchdown during the first half of an NFL divisional playoff football game against the Los Angeles Chargers, Sunday, January 13, 2019, in Foxborough, Massachusetts. (Photo: AP)

Michel became just the second Patriots rookie in franchise history to have a rushing touchdown in the postseason. He joined fellow Georgia alum, Robert Edwards, who ran for a touchdown as a rookie in New England’s 1998 wild-card loss to Jacksonville.

Michel also became the first New England player with two rushing TDs in the first quarter of a playoff game since LeGarrette Blount did it in the 2013 divisional-round win against Indianapolis.

Brady extended his postseason record with his 15th career 300-yard passing game. Next is Peyton Manning with nine.

Brady has a touchdown pass in 13 straight postseason games, tied for the third-longest streak since 1950. Only Brett Favre (20) and Brady himself (18 from 2001-11) have longer streaks.