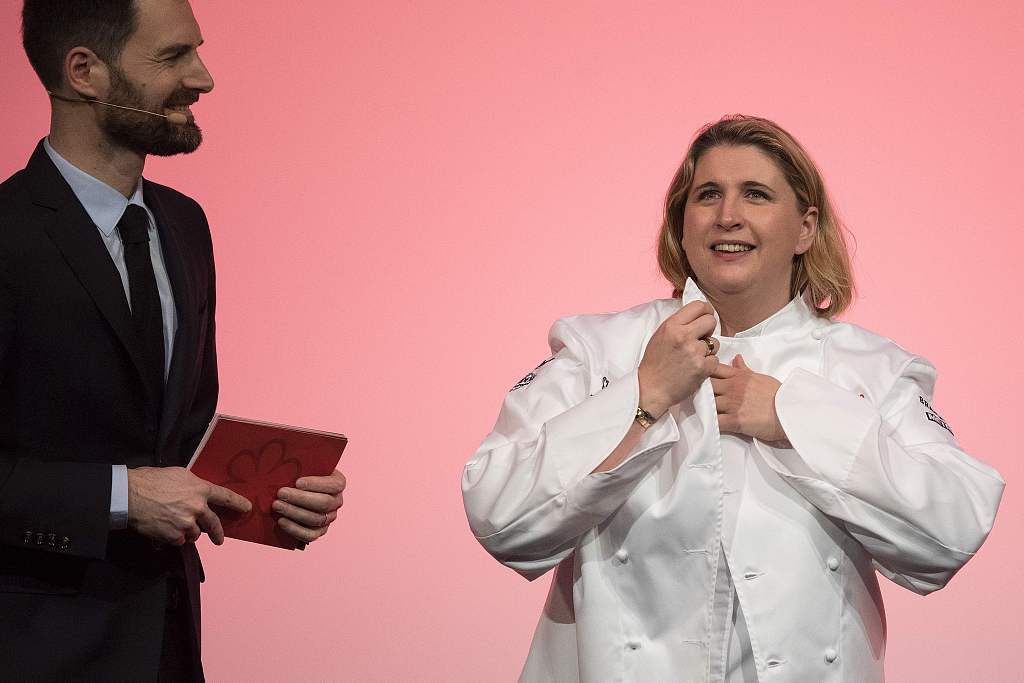 Chef Stephanie Le Quellec (R) is flanked by Michelin guide international director Gwendal Poullenec as she reacts on stage after she was awarded two Michelin stars during the Michelin guide award ceremony in Paris on January 21, 2019. (Photo: VCG)

An unprecedented number of restaurants run by female chefs won plaudits in the new French edition of the Michelin food guide released on Monday, as the guardians of haute cuisine sought to address a glaring gender imbalance.

Eleven female-led restaurants have been added to the 2019 guide to the best food in France, out of a record 75 new additions bestowed with one, two or three Michelin stars.

Among them was 24-year-old wunderkind Julia Sedefdjian, who won a star for her new restaurant Baieta, while Stephanie Le Quellec claimed her second for Parisian restaurant La Scene.

The 2018 French guide had been marked by a near absence of women: Only two female chefs featured, both in partnership with male colleagues. A year earlier, only one woman was among the 70 new additions to the "starred" list.

The guide's new international director Gwendal Poullennec had promised to breathe new life into its pages this year, celebrating young talent as well as female chefs.

"It's a reflection of the great dynamism of French gastronomy, in all regions, with establishments set up by talented young people who are often entrepreneurs who have taken risks," Poullennec said.

Poullennec stressed in an interview with AFP last week that the Michelin reviewers were not working under any "quotas" or "lowering of the criteria," but had simply sought to select a more diverse range of restaurants this year, both in terms of the profile of the chefs and the style of the cooking.

A large number of international chefs are also honored - many of them Japanese - while Argentine Mauro Colagreco became the only foreigner to currently hold three stars in France.

"So many emotions. Thank you! I'm so honored," said the 42-year-old, whose Mirazur restaurant on the glitzy French Riviera ranked fourth in 2018 on the World's 50 Best Restaurants list.

Chef Laurent Petit meanwhile praised the feared Michelin reviewers for having "the sense" to award him a third star for Le Clos des Sens restaurant in Annecy.

"I'm delighted to have won a third star with endive roots and a cabbage tart. Simple, simple, simple," he said.

In one of the biggest shocks, renowned Alpine chef Marc Veyrat lost his third star, along with the Auberge de L'Ill, a restaurant in Alsace that had held three stars for 51 years.

"It's hard for the team, it's hard for everyone - the customers, the family," its chef Marc Haeberlin told France 3 Alsace television.

"I don't know how to explain this loss," said Haeberlin, whose family has run an inn in Alsace for 150 years.

Veyrat, known as much for his trademark wide-brimmed black hat as his love of mountain herbs, said he was "terribly disappointed" that his restaurant the Maison des Bois had been downgraded.

"I can't understand it at all," said Veyrat, blasting the decision as "unfair."

A chef who shocked the culinary world in 2017 by renouncing his Michelin stars was meanwhile stunned to find himself back in the prestigious guide for 2019.

Sebastien Bras had cited the "huge pressure" that came with Michelin recognition when he asked in September 2017 for his three-star restaurant Le Suquet to be left out of the 2018 guide.

Michelin agreed, with the company's then brand manager Claire Dorland Clauzel telling AFP: "It is difficult for us to have a restaurant in the guide which does not wish to be in it."

Bras spent the following year rustling up inventive French cuisine at his restaurant in the town of Laguiole, in the rural Aveyron region, without worrying whether it was meeting Michelin's exacting standards.

But on Monday the 47-year-old said he was "surprised" to see the restaurant back in the guide, with two stars.

"This contradictory decision has left us with doubts, even if in any case we no longer worry about either the stars or the strategies of the guide," he said in a statement sent to AFP.

Bras took over the kitchen at Le Suquet from his father Michel a decade ago.

The elder Bras had held three Michelin stars since 1999, and his son said that knowing a single below-par dish could cost him his reputation had created unbearable pressure as a chef.

"You're inspected two or three times a year, you never know when," he told AFP in 2017.

"That means that every day one of the 500 meals that leaves the kitchen could be judged."

"Maybe I will be less famous, but I accept that," he said of dropping out of the Michelin guide.