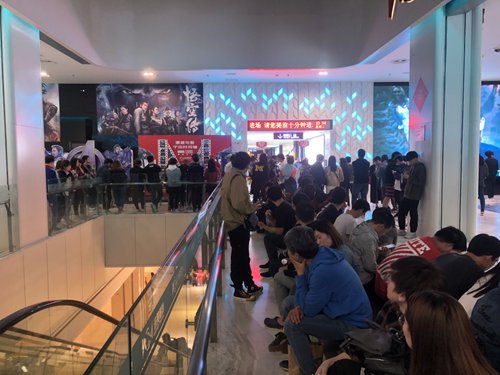 Chinese filmgoers wait inside a cinema in Beijing on Tuesday night to watch the midnight showing of Avengers: Endgame. (Photo: GT)

Just a half an hour before midnight on Tuesday, fans lined up in front of ticketing machines in a local cinema in Beijing to get their tickets for Marvel Studio's final film in the Avengers series - Avengers: Endgame. The first group of moviegoers in the world to get to see the film, Chinese fans of the Marvel Cinematic Universe (MCU) were ready to spend an exciting night at the cinema.

It seems the film's reviews online support these high numbers. The film currently has a 9.2/10 on Chinese media review site Douban from about 50,000 users.

As the closing chapter of the past decade of Marvel films, Avengers: Endgame holds a great deal of meaning for excited fans who want to see how things end. Of course, spoilers in this day of social media can be a huge problem, especially when the film doesn't come out in North America until Friday.

On Tuesday evening, Marvel Studio posted a series of photos of the cast and crew, such as Captain America actor Chris Evans, online, with a message calling upon fans to not spoil the film for those who haven't seen it yet. On Twitter #DontSpoilTheEndgame also topped the trending list on Wednesday.

Even social media companies have come to the fore to protect fans who haven't been able to watch the film yet. On Wednesday morning, the ending of Avengers: Endgame topped the Sina Weibo trending list but was quickly deleted by the platform. While many saw this move as a means to keep fans from being spoiled, some netizens joked that the operators of the social media platform didn't want to be spoiled either.

While pre-sales for the film breaking 700 million yuan in the Chinese mainland made headlines, the high ticket prices at some theaters also became a hot topic of discussion. The price of Avengers: Endgame tickets on Thursday reached 680 yuan in some private theaters. For regular theaters, prices also reached 188 yuan, far higher than ticket prices for other high-rated films such as P Storm and Andhadhun.

"I'm willing to pay for a high price ticket," posted one fan who bought premiere tickets for about 127 yuan.

The crowds in theaters Tuesday night showed that this netizen was not alone.

According to estimates from Maoyan, the film is expected to earn more than 3.5 billion yuan before it finishes its run in the mainland.