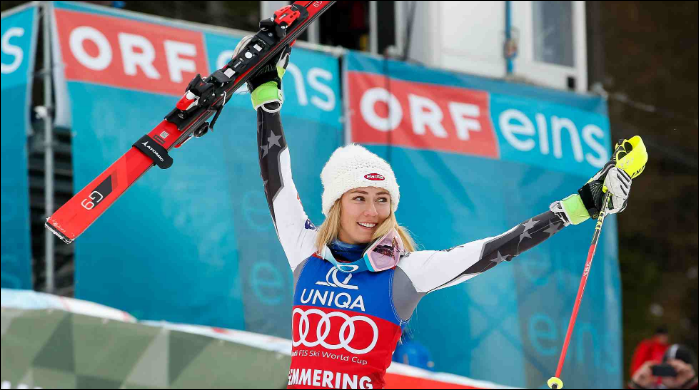 American Mikaela Shiffrin cruised to victory in the slalom in Semmering, Austria, on Saturday for a record 15th World Cup triumph in a year.

It was the American's 36th slalom victory and also a record. She finished 0.29sec ahead of the Slovak Petra Vlhova, winner of Friday's giant slalom, and the Swiss Wendy Holdener.

After a disappointing fifth place the day before, Shiffrin reasserted her domination of the World Cup slopes as she broke the record for World Cup victories she had briefly shared with the Austrian Marcel Hirscher, who has won 14 this year. Neither will race again before January 1.

"It's a little bit distracting," Shiffrin said. "Because I'm not chasing these records and sometimes it gets in my head like I should be thinking about the records and the thing that helps me ski fast is focusing on my skiing."

Shiffrin also ensured she stands alone in women's World Cup slalom history. She broke a tie with the legendary Austrian Marlies Schild, who won 35 slaloms between 2004 and 2014.

"I know the Schild number," Shiffrin said. "She was the best slalom skier of this generation and I wouldn't be here if I didn't have her to inspire me."

"Records are made to be broken and somebody's going to come and break my record, I hope, because that means that I inspired some girl as much as Marlies inspired me and then the sport is coming to a new level," Shiffrin said. "I hope my record doesn't stand forever."

Shiffrin has won 13 of the last 14 World Cup slaloms, including two parallels, and all five run this season, including one parallel. At 23, she has already won 51 World Cup races.

Under clear skies in Semmering, she built a 0.49sec lead over Vlhova in the first leg and, skiing last in the second leg, was able to cruise to victory by 0.29sec.

"I think the big thing was I had a really good first run. So I had a little bit of time to play with," Shiffrin said.

On Friday, after winning for the first time this season, Vlahova reacted with relief to a rare victory over Shiffrin.

"I'm always second. Second, second and second. Then seeing her behind me I feel pride," Vlhova said. On Saturday she was second again.

"History repeats itself," Vlhova said on Saturday. "But she always pushes me to my limits. It's always a great battle with Mikaela"

She is also second in the overall World Cup standings. Shiffrin has 1,034 points, Vlhova has 568, although she is comfortably ahead of Ragnhild Mowinckel, in third on 396.

In the slalom standings, Shiffrin has a perfect 500 points while Vlhova has 400 for finishing second every time.

Holdener was third, 0.38sec behind Shiffrin for the career 18th podium finish in her specialist event.

The women and men slalom skiers open the New Year with a "City Event" through Oslo on January 1.