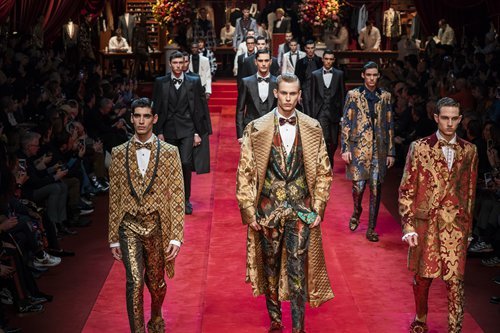 Models take to the runway during the Dolce and Gabbana show at Milan Fashion Week on Saturday. (Photo: IC)

Chinese netizens gave a big thumbs-up to the Italian fashion chamber for launching an online initiative to help Chinese fashion designers who will not be able to attend Milan Fashion Week, which is scheduled to run February 18-24, due to the novel coronavirus crisis in China.

Netizens praised the organization after National Chamber for Italian Fashion (CNMI) head Carlo Capasa launched an initiative titled "China, we are with you" on Instagram Wednesday. The initiative will give Chinese fashion designers a chance to show off their latest designs and share their ideas through interviews, pictures and videos.

Eight Chinese fashion designers will take part in the fashion hub through pre-recorded videos and other content.

"Let's build a bridge with China instead of putting up a wall, as others are doing, to send a positive and unified message against ignorance and prejudice," said Capasa.

"I am so happy and grateful that the Milan Fashion Week is trying to remedy the situation," one Chinese netizen posted on China's Twitter-like Sina Weibo.

According to reports, about 80 percent of Chinese buyers, journalists and stylists who planned to participate in Milan Fashion Week had to cancel their trips.

Huang Ge. founder of the Shanghai Huangge Education Technology Company, an online education company doing fashion illustration , told the Global Times on Sunday that she had planned to take her assistant and several illustrators to participate in Milan Fashion Week as journalists to see the shows for brands Moschino, Marni, Albertal Ferrtti and Etro.

"We applied for the visas and booked flighttickets and hotels a long time ago. We were highly looking forward to this trip as we also took it as a way of team building. We were worried that we might miss out on the show when the epidemic broke out on January 20, and our concern becomes a reality after we heard the news that the flights from China to Italy were canceled in early February," Huang said.

She noted that they decided to watch the show's live broadcast online in China as a compensation measure.

"We are going to use illustrations to record the latest fashion trends of the international first-line brands while watching the live broadcast. We will also integrate some Chinese cultural elements into our works to create new artistic expression methods," she said.

China Fashion Weekly reported on Friday that the the disruption of novel coronavirus to the fashion week  itinerary will cause a series of negative chain reactions to rapidly rising Chinese designer brands as they won't be able to present new collections to foreign buyers, which might lead to shrinking orders in the next season. Brands that usually take part in shows or display in showrooms may not be able to deliver their products on time due to delays at domestic factories. Chinese brands Angel Chen, Ricostru and HUI, for instance, have announced they cannot attend Milan Fashion Week due to factory closures.

Meanwhile, the absence of Chinese fashion designers will also have an impact on international brands, including the weakening of these brands' marketing and decreasing orders and sales in China. CNMI predicted the novel coronavirus outbreak could result in a 1.8 percent drop in sales for the Italian industry in the first six months in 2020, according to the AFP report.

"The loss caused by this epidemic to all industries is self-evident, but the damage to e-commerce will be relatively small, which made us see the power of the internet. One of the impacts of the epidemic on the fashion industry, especially the luxury goods industry, is sales methods. More international brands might choose to open e-commerce platforms in China," Huang said.