Military World Games of 'historic' and 'peace' close in Wuhan 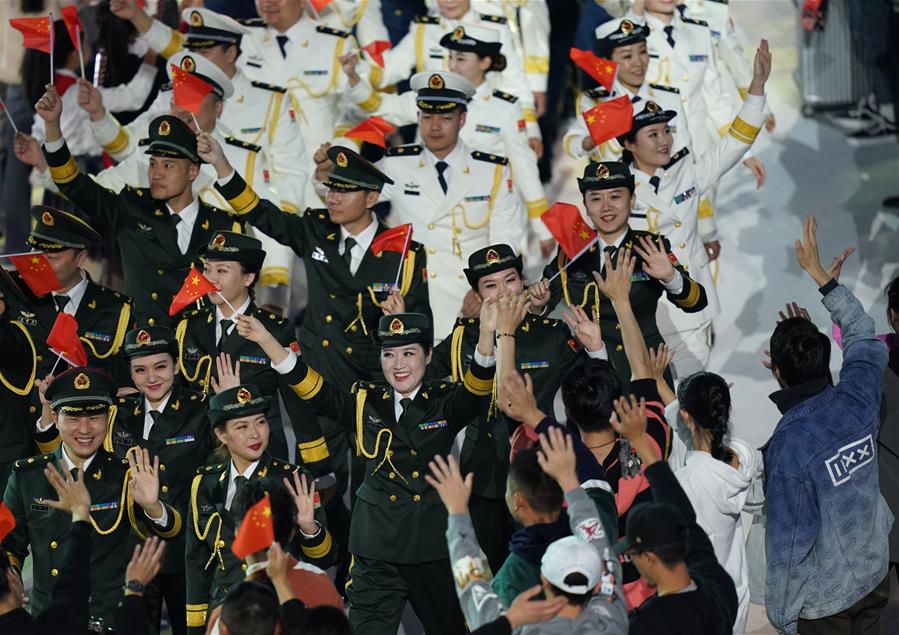 Chinese Vice Premier Sun Chunlan, also president of the Wuhan Military World Games organizing committee, thinks highly of the organization of the Games and the performances of worldwide athletes.

"We have experienced a successful, wonderful and unforgettable military games in the lastest 10 days. This is a military gala of sharing friendship and safeguarding peace," said Sun at the closing ceremony.

"This Games have showcased the spirits of the military personnel, which uphold perseverance, challenging limits and striving for better. This Games are full of wonders and achievements and are set to leave China's marks in its history," she added.

After 10-day competitions, host China collected 133 golds and 239 medals in total, the first time for a country to grab 100 plus golds. The traditional powerhouse Russia obtained 51 golds and 161 medals in all as an evident runner-up in medal tally, followed by Brazil, the host for 2011 Games, with 21 golds and 88 medals. France, Poland and Germany lined up from fourth to sixth places, all clinching 10 plus golds.

Herve Piccirillo, CISM president, hailed the Games as great success and tagged it with two key words "historic" and "peace" on Friday, lauding its material and spiritual legacy to the host city and the world.

"These are games that will mark the history of military competitions and develop new practices in the future," said Piccirillo in an interview with Xinhua.

The president picked the word "historic" for its history-making participation of nearly 10,000 military personnel, investment for games organization, mobilization of volunteers and passion from Chinese people.

Explaining the word "peace", he said, "because the message that is carried by a whole people, because beyond the games, it is all the Chinese people who are spreading this message of solidarity and peace, which corresponds to 'friendship through sport', the motto of the CISM."

The 52-year-old Frenchman repeated his praise on the Games on Sunday at the closing ceremony, saying "the Military World Games leaves Wuhan unparalleled tangible and intangible heritage for the future generations."

Piccirillo applauded the Athletes' Village and sports facilities built for the Games. "Athletes' Village represents the effectiveness of the city government's effort to balance between urban development and environmental protection," said he. "The multiple sports venues built in line with highest standards in the world can serve any future international sports event that Wuhan may step up to host."

It's the first time all competitions for the Games had been staged in a single city. The size of the host city, as well as its diversified terrain and abundant water resources, made it possible in Wuhan, where 35 sports venues were built or renovated to meet international standards.

A 30-building Village was built to accommodate the athletes and coaches, which is also the first attempt in the Games' 24-year history.

Piccirillo expressed his sincere thanks to the organizers and volunteers for their contributions and services to the promotion of military sports, commenting "you have completed your jobs excellently."

"I would like to thank the governments of China, Hubei province, and Wuhan city for enabling us all, valid and disabled, to share the common value of the military under the banner of inclusiveness, equality, universal love and sharing, and this is the greatest success of the event," said Piccirillo.

"All these will not have been possible without the conscientious efforts of the organizing committee. The volunteers have made our stay in Wuhan better, easier and more convenient."

Ma Guoqiang, Party secretary of Wuhan city, paid tributes to the participants across the world, saying they have been "writing down a brand-new page in the history of world military sports," and honored their performances at the event.

"Military athletes from 109 countries have come here and given their full and best plays in the competitions. They have not only demonstrated excellent sports skills, but also showed high morale," said Ma at the ceremony.

He also praised the athletes with disabilities, noting they have exemplified the military dignity and showcased the power of life with their firm determination and great perseverance.

Ma underlined the theme of "peace" delivered from the Games and the sign of goodwill from China. "Peace is an eternal theme and a shared aspiration of the human society, as well as an unremitting pursuit of the Chinese people," said Ma.

"This Games, as a sign of goodwill from the Chinese government, the Chinese armed forces, and the Chinese people, convey our yearning and blessing for peace. We hope the Games, like bright sunshine, can dispel the darkness of war and build a bridge of friendship to promote exchanges between civilizations."

The 2019 Games has attracted the largest number of athletes and presented the most sports in history. Nearly 10,000 soldiers from 109 nations have competed for 329 gold medals in events from athletics, football, swimming, and basketball to parachuting, lifesaving, aeronautical and naval pentathlons.

It's the first time the Games are open to the public, instead of being confined to barracks. Over 600,000 tickets had been sold, according to the Games executive committee, with men's basketball, women's volleyball, swimming and diving in highest demand.

The Games will also leave Wuhan with huge benefits to infrastructure improvements, new subway lines, and environmental upgrades. Over the past three years, the city renovated 1,300 kilometers of its urban roads and saw its metro network reach 330 kilometers in total length. Meanwhile, a total of 360,000 trees were planted.

First held in 1995 in Rome, the Military World Games are a multi-sports event for military personnel organized by the CISM.