Millennium fortune: Han Solo jacket up for auction in London

The jacket worn by loveable Star Wars scoundrel Han Solo in "The Empire Strikes Back" as well as Indiana Jones's signature fedora are among rare movie memorabilia going under the hammer in London on Thursday. 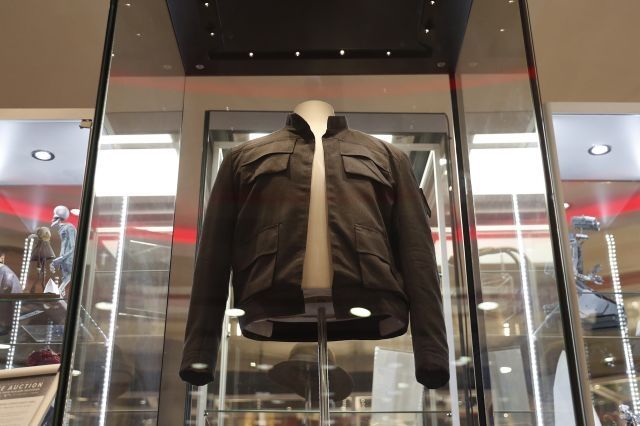 The jacket worn by loveable Star Wars scoundrel Han Solo in "The Empire Strikes Back" as well as Indiana Jones's signature fedora are among rare movie memorabilia going under the hammer in London on Thursday (Photo: AFP)

More than 600 costumes and props from much-adored films and television series, including Marty McFly's hoverboard in "Back To The Future Part II", are being auctioned by Prop Store at the BFI IMAX complex.

The film memorabilia seller has held the annual auction since 2014, and expects this year's collection to fetch a record £3.5 million ($4.6 million, 3.9 million euros).

The big-ticket item is the jacket worn by actor Harrison Ford as smuggler Solo to dodge asteroids and shoot at Darth Vader in "Star Wars Episode V: The Empire Strikes Back".

It is expected to be the highest-selling lot and fetch up to £1 million in the sale, which gets underway at 1100 GMT.

"There's some very cool stylised elements, like this triple-stitch banding on the sleeves."

Alinger noted the jacket's grey colour, explaining how getting clothes to appear the correct shade of blue on film can be difficult.

"This colour hasn't changed. This is exactly what the colour is for 'The Empire Strikes Back'."

Meanwhile Ford's fedora hat in the Indiana Jones franchise debut "Raiders of the Lost Ark", and his bullwhip from 1984's "The Temple of Doom" are also featured.

The fedora was "sat upon, wrung repeatedly and treated with bleach and dust" ahead of filming to achieve a worn look, according to the auction catalogue.

Another hot item is the hoverboard ridden by actor Michael J. Fox's character Marty McFly in the "Back to the Future" trilogy.

The board, expected to fetch £30,000 to £50,000, "is outfitted with neon-green and pink-coloured Velcro on top, and includes a furry pink foot strap," the catalogue says.

For potential buyers on a lower budget, a piece of the Death Star from the "Star Wars" saga is listed at £1,000.

Other classic movie items available include the robe worn by Brad Pitt's Tyler Durden character in "Fight Club", a Wonka bar from "Willy Wonka and the Chocolate Factory" and Johnny Depp's unique costume in "Edward Scissorhands".

Prop Store acquires its wares from movie studios, crew members and other collectors around the world.