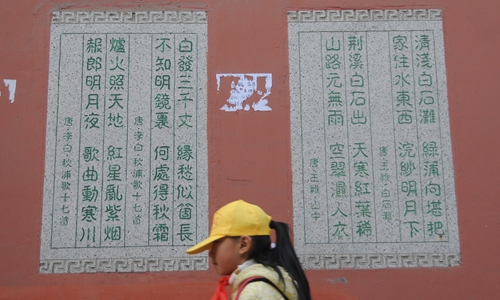 China's Ministry of Education declined a proposal suggesting primary and middle schools teach traditional Chinese characters to preserve their beauty and pass on the ancient culture.

Education analysts on Sunday noted the ministry's decision is out of practical consideration and survey results showed that recognition of traditional characters is already quite high among Chinese people.

The proposal, submitted by China's national political consulting body in March, advised schools to teach reading and writing of traditional Chinese as some simplified characters cannot show its meaning in the structure of the character. One typical example is that simplified character for "love" does not contain character "heart" in it.

Different traditional characters could become one simplified character, causing confusion and misunderstanding, according to the proposal.

The proposal also said that only learning simplified Chinese makes people incapable of reading Chinese classics, which undermines the inheritance of Chinese history and culture.

The ministry stated on its website on Friday that using simplified Chinese in schools and other educational institutions is stipulated by China's Law on Standard Spoken and Written Chinese Language.

The ministry mentioned that the use of traditional Chinese language is included in calligraphy and classic reading courses.

A research fellow at the National Institute of Education Sciences told the Global Times on condition of anonymity that students have rich resources and opportunities to study traditional characters.

Many youth learn traditional characters by watching TV dramas from Hong Kong and the island of Taiwan, which are usually subtitled in traditional written Chinese.

But the Education Ministry cannot change a decades-old national policy on a whim, as the state curriculum and many other supportive policies will have to change accordingly, which would be a big project, he said.

The ministry also stressed that characters are tools and simplification is the trend in development of characters in the past 3,000 years.

Due to evolution of written Chinese, recognizing characters is far from enough to understand ancient books and documentation without special training. Meanwhile, traditional classics have to be interpreted and recorded with modern day languages to pass on the culture, said the ministry.

According to a survey on the use of Chinese languages done across China by authorities, some 60 percent of the respondents "have no difficulty" or "have some difficulty but can guess out the meaning" when they read books and articles written in traditional Chinese characters.

After the founding of People's Republic of China in 1949, the country has adopted a simplified written Chinese list and taught it nationwide to eliminate illiteracy.