CULTURE Minnesota Timberwolves ask too much for Jimmy Butler deal

Minnesota Timberwolves ask too much for Jimmy Butler deal 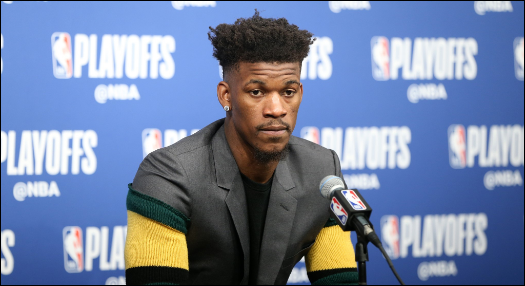 NBA All-Star forward Jimmy Butler is still stuck with the Minnesota Timberwolves, though he has already made it clear that he wants to leave while multiple teams have expressed interest in him and some even made their offers. One of the main reasons is that, the Timberwolves have put a high price on Butler.

According to ESPN's Adrian Wojnarowski, Minnesota want "quality veterans, top prospects, future assets and salary-cap relief" in return for Butler, which is simply too much for any team to accept.

For example, the Philadelphia 76ers are among the teams interested in Butler and have relatively good leverage for trade including first-squad level wing player Robert Covington, promising young men and quality future picks. However, Kevin O'Connor of The Ringer reported that the Timberwolves asked for Ben Simmons who just took Rookie of the Year last season and is seen by many as a cornerstone player of Philadelphia. Sam Amick of The Athletic said that the 76ers have already stopped chasing Butler.

The Miami Heat are still in aggressive pursue of Butler and are willing to accept the remaining 48-million-US-dollar contract of Gorgui Dieng if the deal is good enough. The team's head coach Erik Spoelstra "really wants" to have Butler, according to ESPN's Brian Windhorst and Miami are willing to give the 29-year-old forward a five-year contract worth 190 million dollars in 2019 summer, which is also what Butler wants. However, in order for that to happen, the Heat must get Butler through trade so they can use the Larry Bird exception on him.

ESPN said that the minimum Minnesota could accept for sending Butler away is to regain what they gave up in 2017 to have Butler. Back then, the team sent Zach Lavine, Kris Dunn and the overall No.7 pick to the Chicago Bulls for Butler. Again, that is still too much to ask and makes teams wonder whether the Timberwolves want a deal or not?

Minnesota, or more specifically, head coach Tom Thibodeau has good reasons to keep Butler. First, the team hired him to win and Butler has proved that he can lead the team to win. Second, Minnesota's possible future core combination, Karl-Anthony Towns and Andrew Wiggins have been nothing but disappointing without Butler. Third, it's no secret that Thibodeau loves working with former players of his and Butler grew from a bench player into today's All-Star forward under his coaching at the Bulls.

The Houston Rockets have become another possible destination for Butler with probably the most attractive offer for the Timberwolves. ESPN previously suggested two options: Eric Gordon + PJ Tucker + first-round pick or Eric Gordon + Marquese Chriss + first-round pick. Both include Gordan who just refused a contract extension with Houston.

Butler's trade value has already taken a hit when he asked the Timberwolves to send him away, especially when he had only one year left with his contract. The longer the negotiation gets, the less the team can get from the deal. Unfortunately, even if they keep Butler, it will not do any good to either side.