Scholars and experts are working hard to save documents, images and memories related to groundbreaking murals painted in 1979 at Beijing Capital International Airport, in order to create an informative book and preserve their legacy, as well as celebrate Tsinghua University's 110th anniversary. 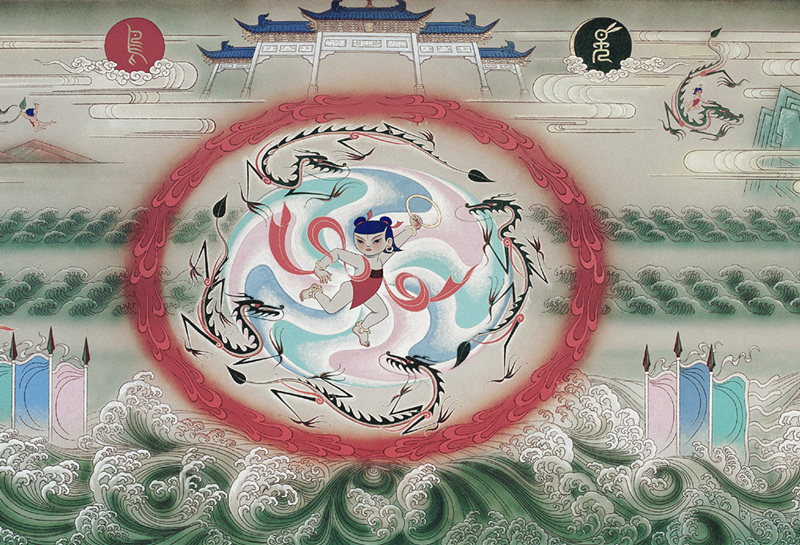 A detail from the mural "Nezha Stirs Up the Sea" by Zhang Ding. (File photo)

"The airport's murals are like the 20th-century continuation of those at the ancient Dunhuang Mogao Grottoes in Gansu province, continuing the legacy of Chinese murals," said Zhou Aimin, associate professor at the Academy of Arts & Design at Tsinghua University (AADTHU).

Beijing Capital International Airport opened in 1958, and construction of its first international terminal building began in 1974. Four years later, the Ministry of Culture and the Civil Aviation Administration of China invited teachers and students from the Central Institute of Arts and Crafts (now the AADTHU) to create art deco murals for the new building.

Zhang Ding, then-president of the Central Institute of Arts and Crafts, headed the creative team behind what was the first large-scale national-level mural project since the founding of the People's Republic of China (PRC). The faculty and students worked with 52 artists from 17 provinces and municipalities across China to create more than 50 artworks, including murals and oil paintings. Completed in 1979, these artworks were placed at various sites around the terminal, from waiting rooms to restaurants. 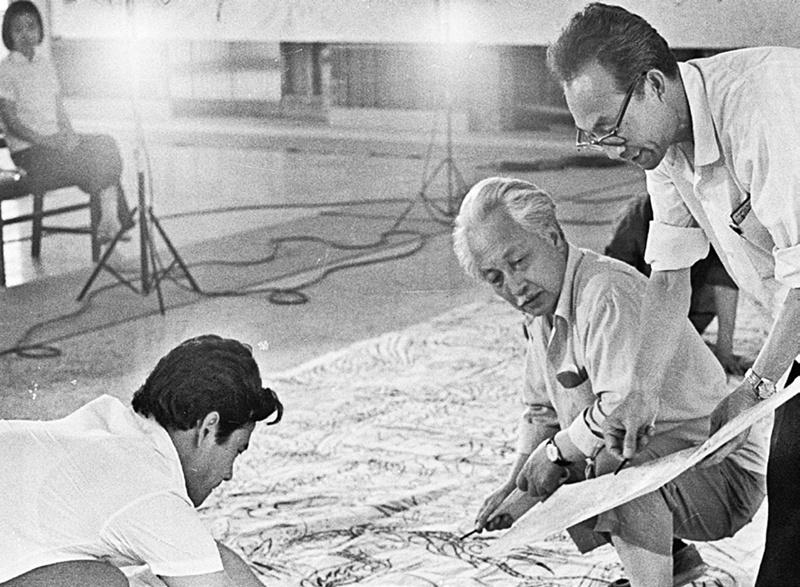 Zhang Ding (middle), artist and then-president of the Central Institute of Arts and Crafts, Zhang Yimin (left) and Chu Qi'en (right) work on the mural "Nezha Stirs Up the Sea" at Beijing Capital International Airport in summer 1979.

At the 4th Congress of the China Federation of Literary and Art Circles (CFLAC) in 1979, fellow artists praised the airport murals for blazing a new path for the art form in China. "The creators emancipated their minds, bravely innovated, and integrated China's traditional mural crafts and modern techniques," said Zhou Yang, then-president of CFLAC.

Tang Wei, now a professor of AADTHU, took part in the project as a college student in 1979. "At first I felt a little bit clueless, but when I started working, I was very excited and energized in that special atmosphere, inspired by such renowned artists and fellow participants, who were also excited to look at the blank concrete terminal walls with their own visions."

Tang was tasked with helping artist Yuan Yunfu finish the mural "Mountains and Rivers of Sichuan." When she looked back on the murals, she called them "creations with long artistic accumulation," while she described the artists as "constantly striving for perfection."

For example, Zhang Ding was both directing the team to create their works, while himself creating a mural titled "Nezha Stirs Up the Sea." Tang recalled: "He insisted on using traditional Chinese techniques to create the contemporary murals, repeatedly testing various paints and pigments to find the best solutions." 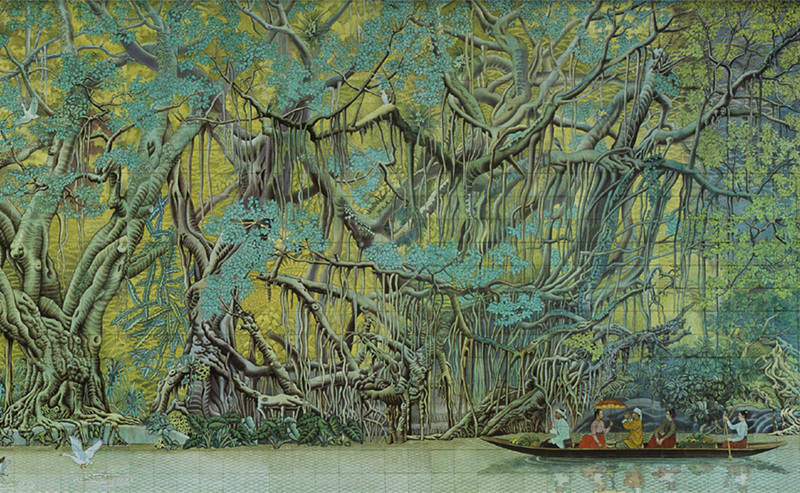 A detail from the mural "Song of the Forest" by Zhu Danian.

Du Dakai, another prominent professor at AADTHU, also participated in the airport project, assisting artist Zhu Danian. "When the murals were all finished, I could feel the shockwaves," he said, noting that many people made the trip out to view the artworks, despite the airport's remote location. A detail from the mural "Song of the Forest," created by Zhu, was later featured on the cover of an art textbook for China's high school.

Du remembered a visit to the airport by Kuwabara Sumio, a renowned Japanese art critic and scholar: "He said, 'This is the spring of China; a new era has come.'"

The artworks at Beijing Capital International Airport have influenced generations of Chinese artists, as well as serving as an aesthetic education for domestic and foreign travelers, acting as symbols of Chinese culture, and representing China's reform and opening-up. 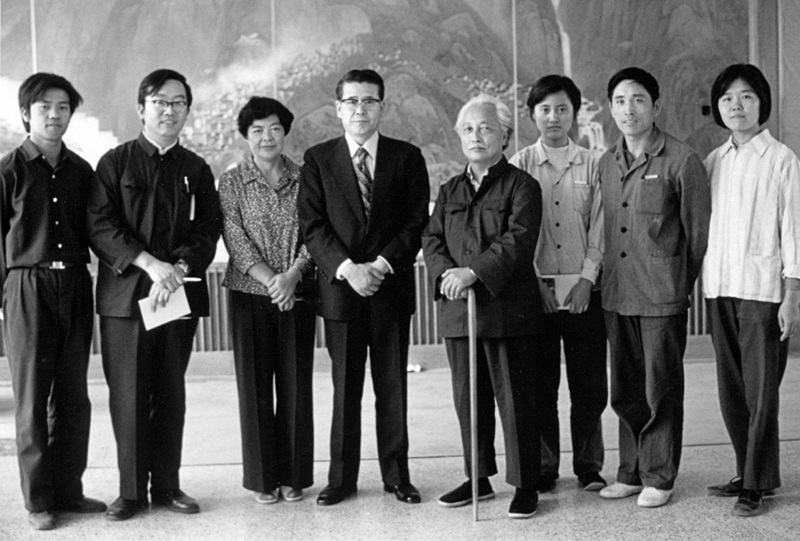 Zhang Ding and his fellow artists pose for a photo with visiting Japanese artist Ikuo Hirayama and his wife in front of a mural at Beijing Capital International Airport, Sept. 14, 1979.

Henry Fok Ying-tung, the late Hong Kong-based tycoon, once recalled: "At that time, when investing in the mainland, we always feared policy changes. Every time I went to Beijing, I had to see if the mural was still there. If it was, my heart would be more secure." 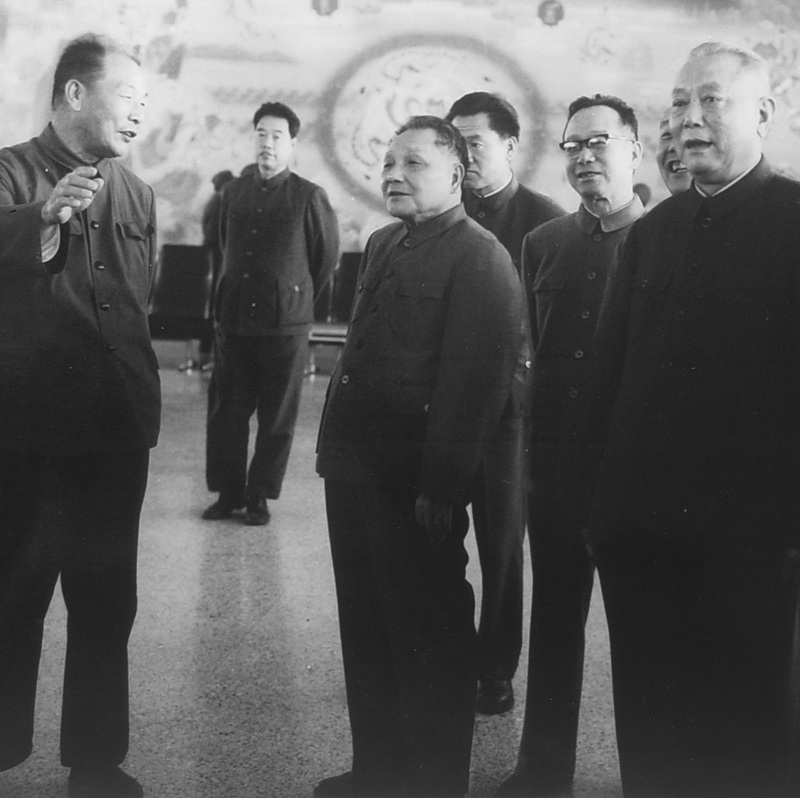 As many of the artists and participants of the project have grown old or passed away, historians, scholars and experts were determined to ensure the artworks will live on forever.

Back in 2019, the AADTHU held an exhibition marking the project's 40th anniversary. Nearly 30 former participants of the project were interviewed to record their memories, and documents, manuscripts and photos related to the project were also collected. 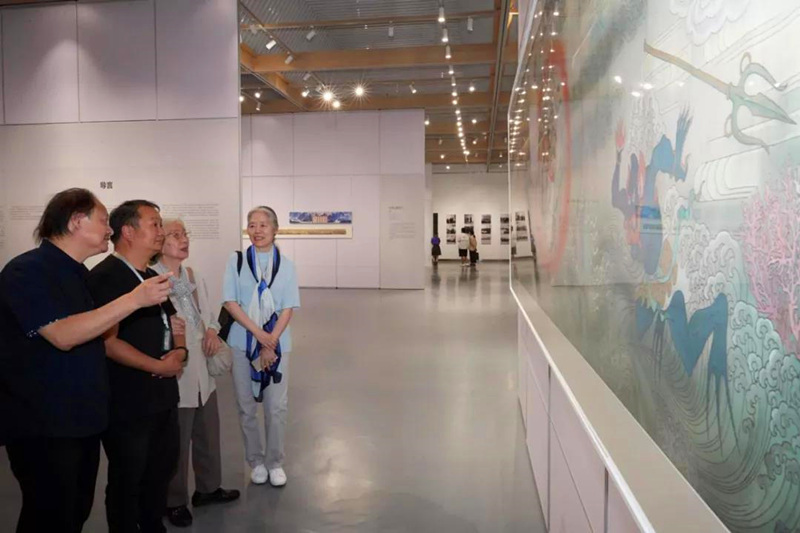 An exhibition to mark the 40th anniversary of the artworks at Terminal 1 of Beijing Capital International Airport was held in 2019.

In addition, since April 2019, the AADTHU has been compiling a book on the Beijing airport murals based on two years of research. This year, the book will be published as part of celebrations to mark the 110th anniversary of Tsinghua University.

"An international airport is the gate way to a country. Machines or equipment may become obsolete over time, but the value of art will never go out of fashion. If an artwork was created based on ancient traditions but has new innovations, it is a valuable creation," said the late Ikuo Hirayama, one of the most celebrated contemporary Japanese artists, when commenting on Beijing's airport murals.