A rare pair of silver dragons discovered in Mongolia by local and Chinese scientists has been added to a prestigious list of archeological discoveries. 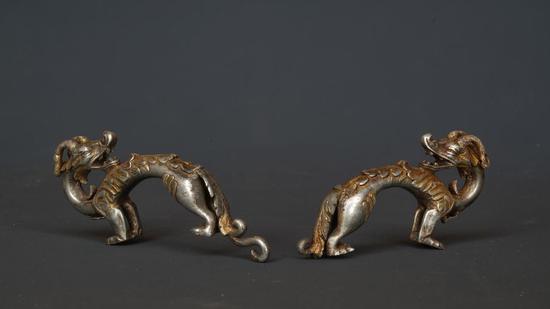 File photo taken on July 5, 2019 shows a pair of gilded silver dragons discovered in a tomb in Arkhangai Province of Mongolia by a China-Mongolia joint archaeological team. (Photo: Xinhua)

The silver dragons were found for the first time not only in Mongolia, but also Asia, said Diimaajav Erdenebaatar, head of the Department of Archeology at the Ulaanbaatar State University, in a recent interview with Xinhua.

"I am very happy and satisfied that our first collaboration was so effective," Eerdenebaatar said of his department's cooperation with Chinese archeologists.

The silver dragons excavated in two lavish tombs jointly by Mongolian and Chinese archeologists have been recently included in the list of top 10 archeological discoveries by the Archaeological Institute of America's Archeology magazine, Erdenebaatar said.

"The two silver dragons, each 8 cm in length and with a gesture looking back to its vertical tail, is a great achievement of a three-year joint excavation in Undur-Ulaan soum of the central-west Mongolian province of Arkhangai co-carried by archeologists from our university and China's Henan province," he said.

"This was the first time that our university's archaeologists collaborated with the Chinese side," said the co-head of the joint Mongolia-China archeological team.

After three years' hard work, the China-Mongolia team this summer finished the excavation of two tombs, both of which are Xiongnu noble burials, Erdenebaatar said, adding that details of the dragons' horns, eyes, teeth and feathers were exquisitely carved.

Nobles of that time probably believed dragons were majestic symbols, according to the Mongolian expert.

"But we are now working to determine exactly whether the two gilded silver dragons were decorative items or otherwise," Erdenebaatar said.

In addition, a number of bronze objects, such as pots and wares, were unearthed from the two tombs.

Many of these bronze objects were broken, and the Chinese archeologists will soon return to Mongolia to restore them, he said.

The archeologists of the two countries also found a number of cultural items believed to date back to the Han Dynasty, Erdenebaatar said.

"It shows that our two peoples have been in a relationship for several thousand years," he added.

Erdenebaatar expressed his willingness to further cooperate with Chinese archeologists in the future.

The Archaeology magazine is a bimonthly publication of the Archaeological Institute of America. As a world-famous archaeological magazine, it began publishing its annual Top 10 Discoveries in 2006.