CULTURE More Americans are dying at home rather than in hospitals

More Americans are dying at home rather than in hospitals 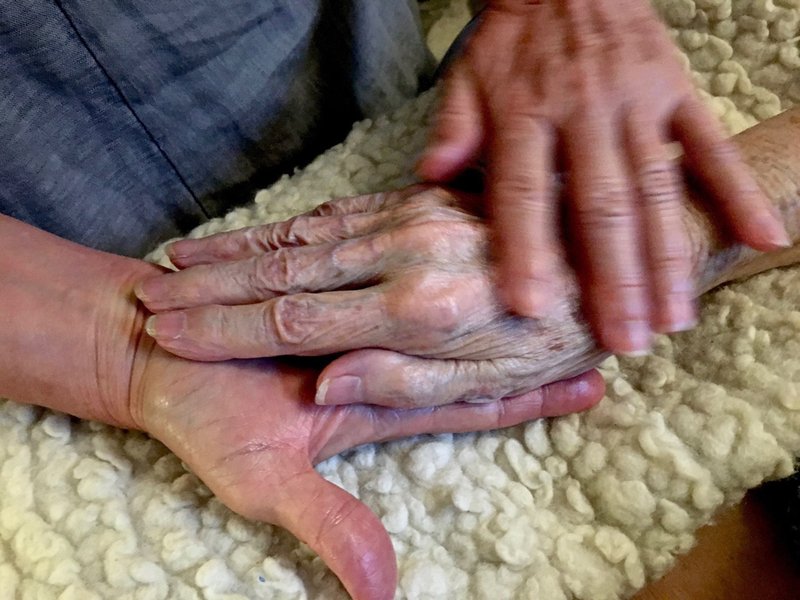 In this 2016 photo provided by Thomas Marrinson, Allison Beach holds the hand of her ailing mother Kathryne Beach inside her home in Hinesburg, Vt. (Photo: AP)

For the first time since the early 1900s, more Americans are dying at home rather than in hospitals, a trend that reflects more hospice care and progress toward the kind of end that most people say they want.

Deaths in nursing homes also have declined, according to Wednesday’s report in the New England Journal of Medicine.

“It’s a good thing. Death has become overly medicalized over the last century” and this shows a turn away from that, said the lead author, Dr. Haider Warraich of the Veterans Affairs Boston Healthcare System.

Betsy McNair, a tour guide who now lives in Mexico, is proud of the ending she helped give her father. Robert McNair was 83 when he died at home in Belle Haven, Virginia, in 2009, six weeks after learning he had lung cancer.

“I made him exactly what he wanted to eat, whenever he wanted it. He had a scotch every night, he had a very high quality of life. If he woke up at 2 o’clock in the morning and wanted to have coffee and pie, that’s what we did,” she said.

Warraich and Duke University graduate student Sarah Cross used government health statistics on deaths from natural causes, rather than accidents or homicides, from 2003 through 2017. The portion that occurred in hospitals fell from 40% to 30% over that period and in nursing homes from 24% to 21%.

Deaths in homes rose, from 24% to 31%. Some assisted living centers may have been counted as homes; researchers had no way to tell.

The type of illness matters, McNair said. Besides her father, she helped care for a brother who died of Lou Gehrig’s disease in his 50s, and her mother, who died at age 92 in a nursing home after a long decline in health.

“They were all completely different experiences,” and sometimes it’s not possible to adequately care for a family member at home, McNair said.

Allison Beach and her husband struggled to figure out how to get help for her mother, Kathryne Beach, who lived with them for three years before dying at their home in Hinesburg, Vermont, in 2016. She had lost her

vision, had suffered a fall and then succumbed to heart failure at age 91.

“We had to really reshuffle our lives. I was determined not to put her into a facility,” Beach said. “We were alone with her at the time of death and I wish we had had more support.”

The experience led Beach, who was a nurse, to seek special training in end-of-life care, hoping to help others in such circumstances.

“I have met many patients who just want to spend one day at home, around their dog, in their bed, able to eat home food,” he said.

People are not only living longer, but they’re often spending more years at the end of life with chronic illnesses.

“Ideally we’d like to see people live longer and with fewer disabilities,” he said. “We have work to do there.”