ISTANBUL, Aug. 9 (Xinhua) -- Murat Baltaoglu, a Turkish advertiser, arrived at a park in central Istanbul early on Thursday in a hurry to attend his Tai Chi class. 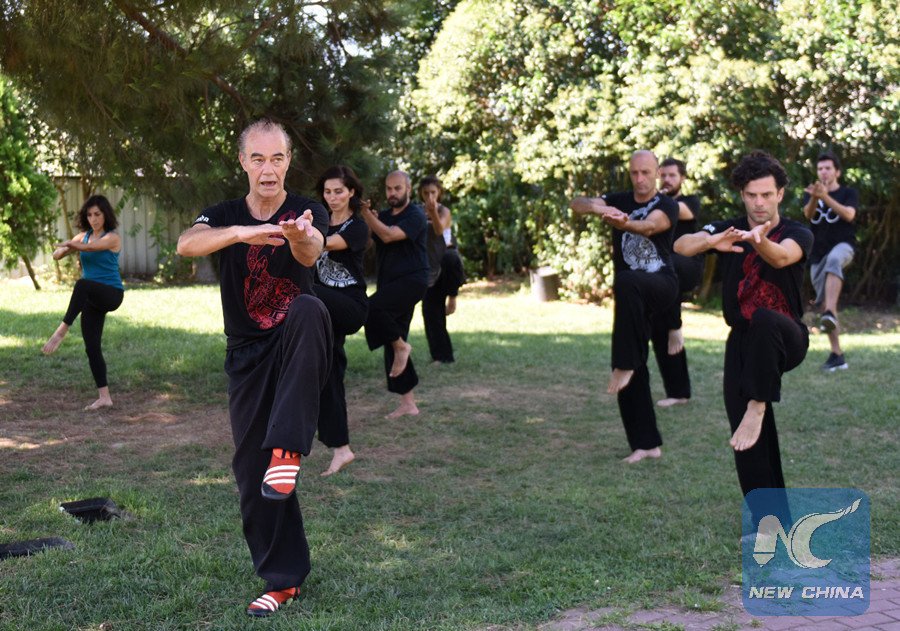 He practiced the Tai Chi moves, an ancient Chinese martial art, along with his 10 peers, all barefoot on the grass. They were trying hard to follow their instructor while repeating his moves simultaneously.

Tai Chi has recently become an appealing activity, especially for those who feel stressed out living in big cities like Istanbul, according to Mustafa Karslioglu, deputy head of the Turkish-Chinese Cultural Association.

"They are increasingly trying to avoid stress and chaos of city life by practicing Tai Chi," he said.

For Karslioglu, the association is the biggest sponsor of Tai Chi groups in Istanbul to meet people's growing demand in attending Tai Chi classes.

"We opened a large number of courses in sports halls, dancing halls, and yoga centers during the winter months," he noted. "Since the beginning of summer, a growing number of people have filled parks and green areas in Istanbul to attend the classes performed in nature."

"The Tai Chi combines slow movements, meditation and breathing exercises while bringing a physical and spiritual calmness to life," Esat Atac, a Tai Chi instructor, told Xinhua in the park while his students were doing warming-up moves.

In 1999, Atac decided to quit his textile business and devoted himself to learning Tai Chi. Later he went to Wudang Mountain in China in 2011 to learn the instructor courses.

Since then, he has been teaching Tai Chi, "enabling people to raise their life energy."

"When we apply the Yin and Yang philosophy of Tai Chi to our daily life, we can catch the harmony and balance in our body," he added.

Baltaoglu started to attend Atac's classes two years ago, and realized that he has got rid of all the deadlocks in his life.

"Tai Chi made me have a life of good quality, and I recommend it to everyone," he told Xinhua while taking his shoes off before the practice.

He explained that doing the exercises barefoot in nature is of great benefit to health.

"It is of great use to get oxygen outside and take the energy from the soil," Baltaoglu noted. "It is both physically and mentally much more relaxed."

He first started to practice Tai Chi in a salon. "But when I went out into the open air, I felt the sensation of the soil under my feet," he explained.

Ebru Ojen, a 37-year-old actress, has been learning Tai Chi for two and a half years. Currently, she attends the classes every day.

"I feel much more vigorous compared with my life before Tai Chi," she said, adding she is no longer disturbed by sleep problems or stomach pain after practicing Tai Chi.

"I'm much more focused, feeling energetic and ample, and my metabolism is working faster," she added.

Atac, meanwhile, said that his class consists of people from different segments of the society.

"There are psychologists, doctors, business owners and so on," he explained.

In Atac's view, however, Tai Chi is still not very well known in Turkey, despite all the benefits it offers.

"Its recognition here is only around 6 percent of the population while yoga is 60 percent," he said.

"But the world is getting smaller thanks to the internet," he continued. "Whoever does a little search on the website can easily reach us."

Atac is also teaching classes in several resort towns across the country, including the western province of Izmir.