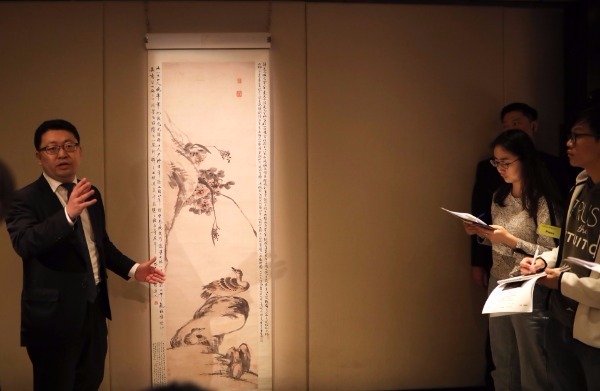 Chinese and Asian art collectors have become more knowledgeable, sophisticated and are branching out for more Western works, said Francis Belin, president of Christie's Asia, who is excited about the trend.

"Chinese clients have evolved from being very dedicated to Chinese arts to gaining increasing interest in other categories and expanding the spectrum of the type of objects that they wish to collect," Belin told Xinhua in an interview in New York City during Christie's Asian Art Week held on March 19-26.

Diversity of collecting is one of three "fundamental trends" the auction house has observed among the Chinese and Asian buyers, Belin said, noting the increased appetite to collect across categories.

About 10 or 20 years ago, Asian collectors focused primarily on the art that relates to their own culture, he said, "we've seen this evolved in the past years to be much more holistic in the collecting of our Asian buyers."

There is "more appetite" among them for western arts across the period, be they old masters' paintings, impressionist, or modern and contemporary, he said.

The second trend is that Chinese and Asian markets continue to grow and flourish despite short-term macroeconomic challenges the world is facing, Belin said.

"There are more young billionaires in Asia than we have in Europe and in the U.S., and that's also reflected in collecting, which is very exciting for Christie's, because we can bring our clients much earlier on the collecting journey with the best art across the world. And we can accompany them for even longer time in their journey."

Being the first international fine art auction house to be granted a license for art transaction in China, Christie's has established two art galleries in the Chinese mainland, one in Beijing and one in Shanghai.

"We use these galleries to organize lectures and to bring knowledge of our international specialists to existing and emerging collectors in China," said Belin. "I think the key distinction that Christie's has is really the strong footprint in the Chinese mainland... The footprint helps realize Christie's commitment to be present and be close to the collectors through further expansion into the Chinese mainland market."

Belin describes the two galleries as "backbone" of Christie's various activities in China. The auction house started its live auction in the Chinese mainland since 2013, when it brought a diverse categories to local collectors.

The United States was the world's largest art market, accounting for 42 percent of sales by value, according to The Art Market 2018, an annual report analyzing the global art industry and produced by UBS and Art Basel.

China leapfrogged Britain to take second position with 21 percent market share. Britain, with 20 percent of the global market, is followed by France.

Chinese buyers alone have taken the lion's share with 10 percent, a significant increase compared to the much thinner 4 percent of 2016 which again shows the continued growth of purchasing power in Asia, said the report.