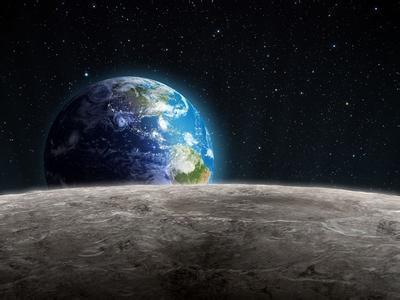 WASHINGTON, Jan. 17 (Xinhua) -- An international team of astronomers leaned about the Earth's history of asteroid impact by studying the craters on the Moon.

The study published on Thursday in the journal Science showed that the number of asteroids colliding with the Moon and the Earth was about two to three times higher over the last 290 million years than over the previous 700 million years.

Scientists used to assume that the asteroid collisions are well-distributed but most of Earth's older craters have been erased by erosion and other geological processes.

But a study on lunar craters showed otherwise, as both bodies are hit in the same proportions over time but the Earth's geological processes are not present on the Moon.

The U.S. space agency NASA's Lunar Reconnaissance Orbiter (LRO), equipped with a thermal radiometer, detected how heat is radiating off the Moon's surface, since larger rocks tend to give off more heat than finer soil.

Because younger craters tend to be covered by more boulders, scientists identified the age of lunar craters in the past 1 billion years, according to the study.

Comparing craters on the Moon with those on Earth, they found that "the Earth has fewer older craters on stable terrains not because of erosion, but because the impact rate was lower prior to 290 million years ago," according to the paper's co-author William Bottke, an asteroid expert at Texas-based Southwest Research Institute.

The reason behind the intensifying bombardment is still uncertain, but the scientists speculate it might be related to large collisions taking place more than 290 million years ago in a belt between orbits of Mars and Jupiter, which produced more debris.