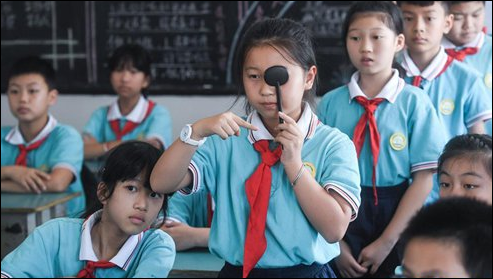 A student checks the eyesight in Donglin primary school in Donglin Township of Huzhou City, east China's Zhejiang Province, Sept. 4, 2018. Classes are being taken to popularize the knowledge of protecting eyes as China aims at curbing the rise in nearsightedness-or myopia-among children and teenagers. (Photo: Xinhua)

The number of obese children and teenagers and those with poor eyesight increased in 2018, a report revealed.

About 8.8 percent of fourth-grade primary school students were obese, and the percentage of r eighth-grade students was 9.7 percent in 2018, according to the 2018 compulsory education quality monitoring report, published by the Ministry of Education on Wednesday.

The report is based on tests of 200,000 students in fourth and eighth grades nationwide. It's the first time the report included different subjects in compulsory education such as math, health and physical education.