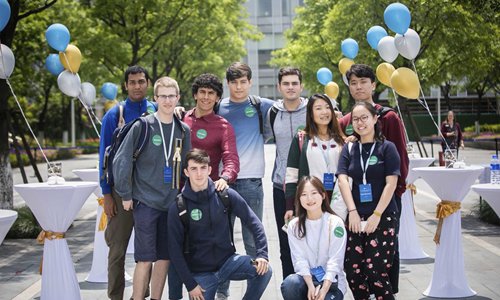 While the rise of nationalism in some Western countries has deterred global talent, China has maintained a more inclusive and open stance for international students, experts said.

The report said the US hosted 22 percent of the world's students in 2018, ranking first, while the UK was in second with 10 percent.

China was also the destination for 10 percent of the world's mobile students in 2018, it said. Nearly half of international students in China come from countries and regions along the Belt and Road Initiative, as the scheme serves as an effective tool to facilitate educational exchanges, it said.

In 2012, China announced a goal of hosting 500,000 international students at all academic levels by 2020, which it is close to achieving, said Wang Huiyao, president of the CCG.

The increase in China's global trade and investment, as well as the Belt and Road Initiative's demand for overseas talent, are the main drivers for attracting foreign students, Wang told the Global Times on Thursday.

China has been improving its stimulus policies in recent years to provide job opportunities for overseas students who choose to stay after graduating. For instance, regulations issued in August show that the Chinese government encouraged talented foreign students to find jobs and start businesses in six new pilot free trade zones.

Other measures include improving the quality of education and increasing financial aid, the report said.

As in many other countries, China desires high-tech talent, such as e-commerce graduates, Wang said.

Technology ecosystem is another advantage in attracting global talent since the market is huge for technological solutions in China, and there are a lot of potential opportunities for international students, Ahmed Baghdady, the manager of research and content development at WISE, told the Global Times.

Baghdady said that China's opening up to the world in higher education has accelerated the mobility of global talent, while "the US, the biggest destination for international students, is no longer the best place to stay after graduation" considering its new strict immigration regulations.

The report suggests that the rising nationalism in recent years has influenced the mobility of international students in some Western countries such as the UK and the US.

The Brexit referendum in the UK in 2016 would likely produce far reaching consequences on student mobility in and out of the UK, and the US with is political shifts and restrained visa policies would also raise the question of whether it has become less attractive to international students.

"We're seeing several movements of nationalism, and even hate speech and racism against international students from some countries," Baghdady said.