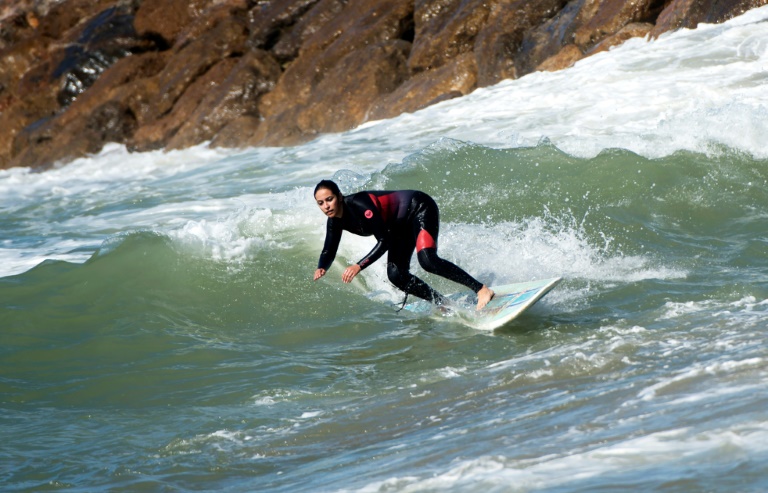 Moroccan women surfers have become increasingly common but some still face prejudice or harassment back on land.(Photo: AFP)

Moroccan women surfers have become a common sight as they skim the waves off the coast of the capital, Rabat, but they still can face prejudice and harassment back on land.

"It's easier in the winter because the beaches are empty," said surfer Meriem, 29, who, like most of the women surfers, wears a wetsuit.

"In the summer we suffer a lot of harassment, that's why we pay attention to what we wear."

The engineer, who took up the sport four years ago, said she's lucky to have grown up in a "tolerant" family.

For many Moroccan women from conservative backgrounds, such activities are off limits.

"Some families are ashamed that their daughters practise water sports," said Jalal Medkouri, who runs the Rabat Surf Club on the capital's popular Udayas beach.

The gentle waves nearby are ideal for beginners, but nestled at the foot of the 12th century Kasbah and easily visible from the capital's bustling touristic heart, the beach is far from discreet.

Yet some club members say attitudes are changing.

Rim Bechar, 28, said that when she began surfing four years ago, "it was a bit more difficult".

"At first, my father accompanied me whenever I wanted to surf," she said. But now, "people are used to seeing young women in the water, it's no longer a problem."

Today, she surfs alone, stays all day and goes home without problems, she said.

Surfers first took to the waves off Morocco's Atlantic Coast in the 1960s, at the popular seaside resort of Mehdia, about 50 kilometres (30 miles) north of the capital.

Residents say soldiers at a nearby French-American military base were the first to practise the sport there.

A handful of enthusiasts, French and Moroccan, quickly nurtured the scene, travelling further south to the lesser-known beaches of Safi and Taghazout, which later gained popularity with surfers from around the world.

But mentalities differ from beach to beach.

Despite efforts to improve the status of women in the North African country, attitudes have been slow to change.

Mentalities differ from beach to beach in Morocco about women surfing, with some more conservative than others

A United Nations study in 2017 found that nearly 72 percent of men and 78 percent of women think "women who dress provocatively deserve to be harassed".

The harassment women surfers can face in Morocco ranges from looks and comments to unwanted attempts at flirtation and attention from men.

In Mehdia, however, surf instructor Mounir said it's "no problem" for girls to surf.

Last summer "we even saw girls in bikinis on the beach and the authorities didn't say anything", he said.

"Girls are often harassed by the boys," Bechar said.

"At first it wasn't easy, so I decided to join a club."

The Rabat Surf Club now has more than 40 surfers, half of whom are girls, Medkouri said.

"Parents encourage their children when they feel they are in good hands," he said.

Club surfing is particularly popular among girls because the group setting cuts harassment and eases the concerns of some families.

Ikram, who also surfs there, said she hopes "all girls who were prevented by their father or brother from doing what they want will follow this path".

"Surfing makes you dynamic," she said.