CULTURE Most in US back curbing in-person worship amid virus: poll

Most in US back curbing in-person worship amid virus: poll 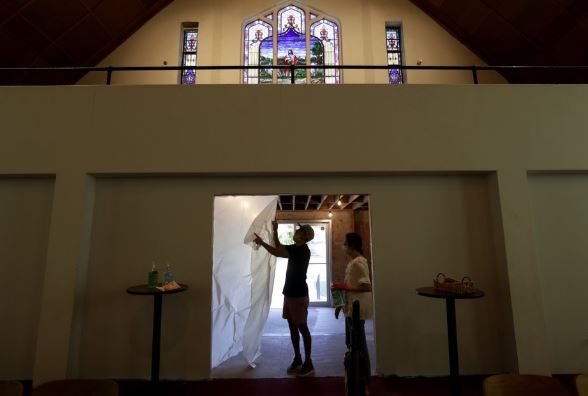 While the White House looks ahead to reopening houses of worship, most Americans think in-person religious services should be barred or allowed only with limits during the coronavirus pandemic — and only about a third say that prohibiting in-person services violates religious freedom, a new poll finds.

States have taken different approaches to resuming gatherings as the coronavirus continues to spread, raising tough questions for religious leaders and the faithful about the appropriate time to return. But the findings of the new poll by The University of Chicago Divinity School and The Associated Press-NORC Center for Public Affairs Research suggest that, even as President Donald Trump projects eagerness to reopen, many religious Americans are fine with waiting longer to return to their churches, synagogues and mosques.

Among that group is 54-year-old Andre Harris of Chicago, a onetime Sunday school teacher who has shifted his routine from physical worship to the conference calls his church is holding during the pandemic.

Harris, a Methodist, said that until “either there’s a vaccine, or if we know that things have calmed down, I am not comfortable going back to the actual building.”

White evangelical Protestants, however, are particularly likely to think that in-person services should be allowed in some form, with just 35% saying they should be completely prohibited. Close to half – 46% -- also say they think prohibiting those services violates religious freedom.

That constituency’s support for some form of in-person worship underscores the political importance of Trump’s public calls to restore religious gatherings as a symbol of national recovery from the virus, as energizing evangelical voters remains a key element of the president’s reelection strategy. Trump won praise from some evangelical leaders for citing the aspirational ideal of “packed churches” on Easter during the first weeks of the pandemic, though his goal didn’t materialize on Christianity’s holiest day.

Trump has since consulted with religious leaders on a phased-in return to in-person worship.