CULTURE Move over Paddington...Winnie-the-Pooh to bear all in London show

Move over Paddington...Winnie-the-Pooh to bear all in London show 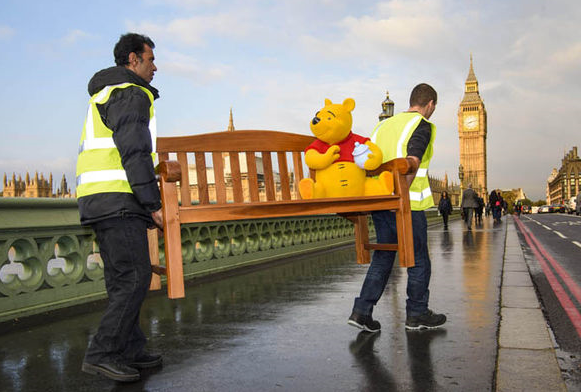 Paddington Bear may have captivated cinema audiences this year, but another ursine star, Winnie-the-Pooh, will get his own show at London’s historic V&A museum this month.

“Winnie-the-Pooh: Exploring a Classic” which opens this week  features around 230 works and artefacts dating from 1920 onwards, including original illustrations and manuscripts, such as E.H. Shepard’s first portraits of the honey-loving bear.

The exhibition is not the first examination of real-life inspirations for Winnie-the-Pooh this year, with a Hollywood film, “Goodbye Christopher Robin”, telling the story of A.A. Milne and his family while he was creating the character.

The V&A is hoping to attract more young families through its doors and one of the exhibition’s curators Emma Laws felt that Pooh, who turned 90 last year, was the perfect bear for the job.

“Everybody loves Winnie-the-Pooh, he’s inter-generational, so this is a chance for everybody,” Laws told Reuters

In addition to memorabilia, the exhibition examines the real people and places behind the stories - Milne’s son Christopher who served as the inspiration for Christopher Robin, and Ashdown Forest in Sussex, which inspired the Hundred Acre Wood.

“Winnie-the-Pooh is a very simple, evocative sort of world in which you want children to be able to get fully immersed in the imagination of going into the Hundred Acre Wood,” exhibition designer Tom Piper said.

”So we wanted to make it immersive in lots of different ways. So there’s digital immersion, but equally we’ve created huge hand-painted, five meter high versions of the Hundred Acre Wood, (so) that you can really get the atmosphere of the place.”

Not everyone has such fond childhood memories of Pooh and his pals, however,  Milne’s son Christopher wrote in a memoir that he had a difficult relationship with the character, and had suffered bullying at school as a result of the books.