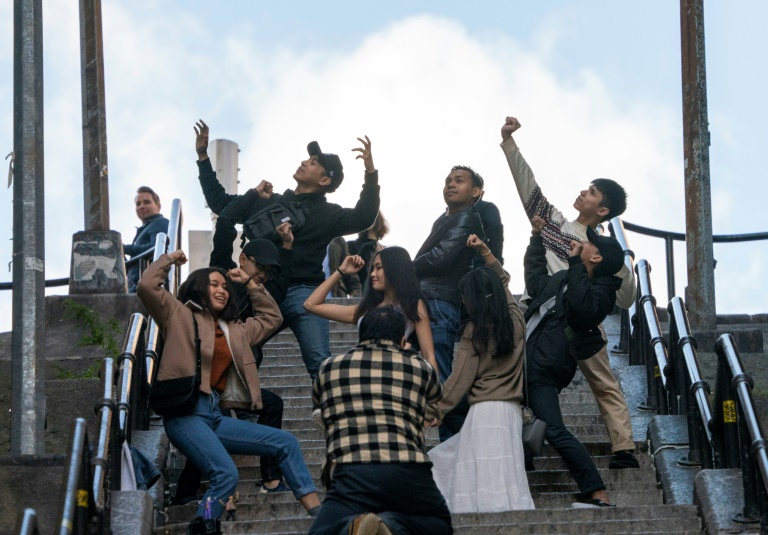 Tourists pose on the steps in the Bronx in New York featured in hit movie 'Joker'. (Photo: AFP)

Tourists are flocking to a flight of stairs in the Bronx area of New York that Joaquin Phoenix dances down in an iconic but controversial scene from hit movie "Joker."

Film buffs have even had to queue before being able to snap photos of themselves recreating the character's pose that appears on the poster of the Todd Phillips-directed blockbuster.

"It looks even better than in the movie," Tasula Ceballos, a young Russian living in Miami, told AFP, slightly disappointed that the crowds meant her photos didn't come out quite as she had hoped.

"I love when directors shoot in real places. Usually they film in studios like Warner Brothers but this is a real place. We can come and we can touch the floor," she added.

Before "Joker" hit theaters in early October, the 132 steps between Shakespeare Avenue and Anderson Avenue were about as far away from the tourist trail in New York as you could get.

Now visitors are swarming to them from all over the world to upload pictures to Instagram or create hilarious memes to share online.

"I've been a huge fan of Batman since I was small and I'm really happy to come here," said French teenager Noa Angenost, who planned to post his photos on Instagram.

In the film, Phoenix dances down the steps -- with a backdrop of streetlights and classic New York fire escapes -- after transforming himself into the Batman villain.

Many reviewers were outraged, however, that the song he danced to was by convicted pedophile Gary Glitter. The former glam rocker is in a British jail for sexually abusing three girls in the late 1970s.

This is not the first time that a staircase featured in a film has become a tourist draw -- the steep, narrow flight of 75 stone steps in Washington's Georgetown neighborhood seen in "The Exorcist" have drawn crowds for decades.

In the Bronx, the sudden "Joker" craze is not appreciated by everyone.

Elliott Raylassi, carrying his white bike on his shoulder, tries to disrupt the photo shoots.

"It's my neighborhood and I have to do what I can to defend it," he told AFP, saying it was a "shock" that his area was suddenly under the microscope.

"The movie came out and within a week, people came to visit one of the worst neighborhoods in the borough.

"There's a trend in New York City that when a neighborhood garners a lot of tourists' attention, it sparks the interest of developers," he added.

Frankie Astacio, who lives on the other side of the street from the steps, welcomes the interest though.

"It's good for the neighborhood. It makes it more exciting," he said.