Roslyn Harbor, US (People’s Daily) - The Nassau County Museum of Art in New York City is inviting guests to visit its current exhibition blue, which will last through November 2020. 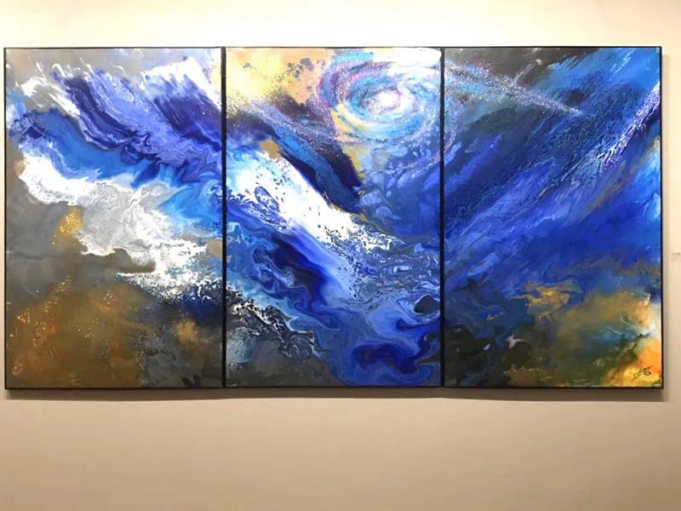 “From the Japanese prints (using Prussian blue) to the Moroccan tiles, blue is a global color,” said Charles Riley, the director of the museum. “Even among the primaries, the color of the sky and sea commands a privileged place, by far the most popular hue in the spectrum according to surveys on every continent. Blue casts its spell, pushing beyond symbolism to a deeper emotional level, drawing us into its pure and distant mysteries.”

“Turquois, Sapphire, or the International Klein blue (IKR) are all variants of blue that transcend emotion in different continents,” said Riley, a former professor who authored 38 books on art and culture. “For example, the ‘United Nations blue’ is a special color designed specifically for the UN, and others cannot use the same color.”

As an educator, Riley and his wife, Liu Keming, curate the gallery, which changes exhibits every season, attracting about 200,000 visitors per year. Riley once taught in Hebei Normal University in Shijiazhuang, China’s Hebei Province. He hopes the exhibition, which is aimed at promoting intercultural understanding through art, can attract contemporary artists, such as rising stars from China, to build a bridge between western culture and the rest of the world.

The global and historical span of blue’s cultural meanings, from ancient Egypt and China to medieval Europe, is an important theme of the exhibition.

Created by Chinese artist Cao Jun, The Convergence integrates Chinese classical calligraphy and Western modernism and creates a blue cosmos. By combining techniques from Chinese traditional art with the inspiration from Western landscape paintings, Cao demonstrates his enthusiasm for cross-cultural communication and art fusion in his works.

“We are fortunate to have one of the nation's largest, most important suburban art museums right here in the Nassau County,” Riley said. “If there's one message to be gained from a visit here, it's that art takes many forms, from sculpture and architecture to nature, and at the Nassau County Museum of Art, one can see and experience it all in one place.”

Ranked among the nation’s largest suburban art museums, the Nassau County Museum of Art is located 25 miles east of New York City in the heart of Long Island's Gold Coast. The museum now showcases more than 100 artworks by some of the most well-known artists including Pablo Picasso, Francoise Gilot, Henri Matisse and Joan Miro.