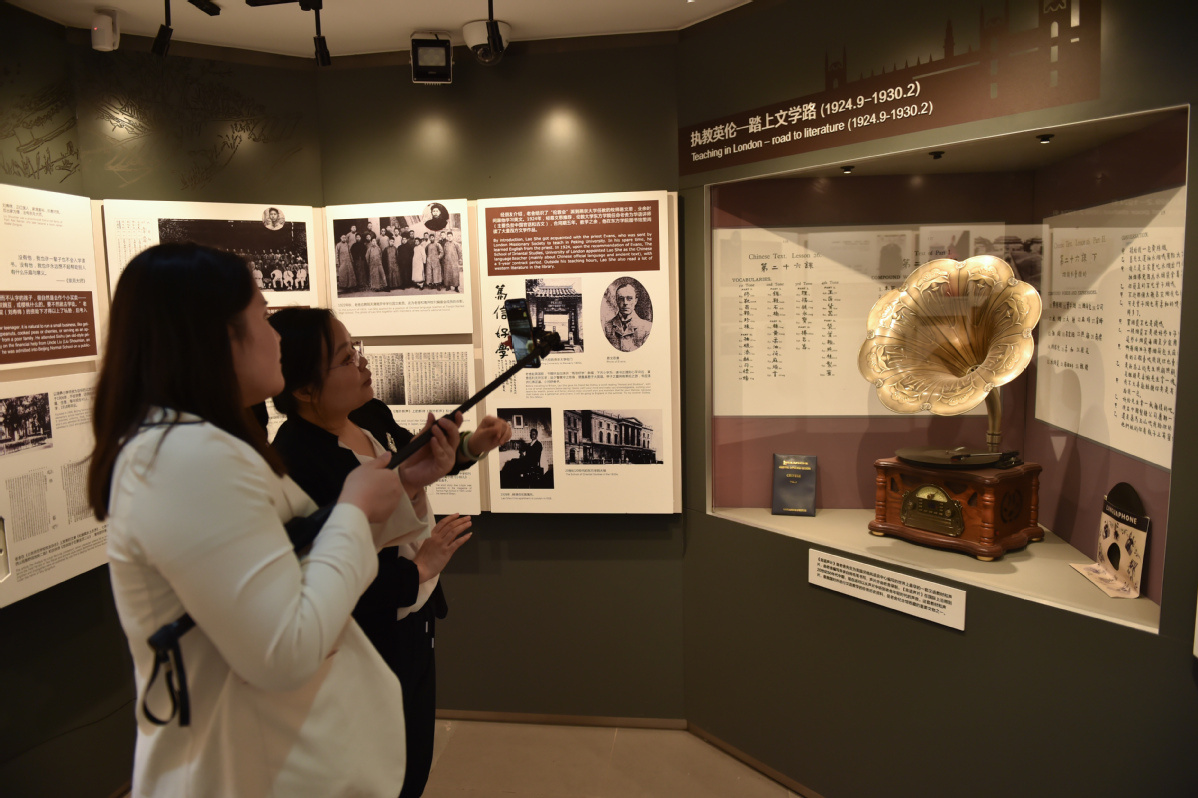 A guide at the Memorial Museum of Lao She joins an online host in a livestreaming program in Beijing on Saturday. (Photo: Xinhua)

Museums in many Chinese cities are holding a variety of events to promote culture and get closer to the public, echoing the theme of the 2020 International Museum Day, which is "Museums for Equality: Diversity and Inclusion".

As part of the activities held during International Museum Day, which falls on Monday, more than 20 of China's most renowned museums are providing access on digital platforms to virtual exhibitions from Sunday to Tuesday.

Starting at 9 am on Monday, six major attractions, including the Maiji Mountain Grottoes and Mogao Caves, will be shown on a livestreaming platform for the first time.

Nanjing, capital of Jiangsu province, will host the main event of this year's event in China. Scholars from foreign countries and organizations, including the United Kingdom, the United States and the International Council of Museums, will also join an internet symposium in Nanjing on the future development of the world's museums in the context of cultural diversity.

Wu Xiaolin, deputy director of the Jiangsu Provincial Department of Culture and Tourism, said the province has 302 registered museums that provide diversified and professional exhibitions. The museums in the province received more than 100 million visitors last year.

On Monday, the Nanjing Museum is holding an exhibition showcasing about 200 cultural relics ranging from the Spring and Autumn period (770-476 BC) to the Han Dynasty (206 BC to AD 220).

Many curators of museums, including the Dunhuang Academy, the Nanjing Museum and the Hebei Museum, will also give detailed information about their top collections on livestreaming channels.

As China's cultural center, Beijing is building itself as a "city of museums" with its 187 registered museums.

On International Museum Day, the city's museums will launch 94 events, including 50 online exhibitions and 15 livestreaming broadcasts, to reduce the infection risks from face-to-face contact.

"The online exhibitions and livestreaming can overcome the limits of time and space to provide content equally for all," said Chen Mingjie, head of the Beijing Administration of Cultural Heritage.

"We have organized experts to give high-quality museum interpretations to all online and offline audiences."

He said that cultural heritage authorities in Beijing want to create an atmosphere in which local residents and visitors can access a museum anytime and from any location.

The events will allow people to closely observe cultural relics without being physically present at the museums.

A group of museums such as the China National Film Museum, the Memorial Museum of Lao She and the Overseas Chinese History Museum of China hold livestreaming broadcasts, while some others such as the China Media Museum will adopt virtual reality technology to provide a more vivid experience.

"Even though we are in the special period of COVID-19 epidemic prevention, we can still connect closely with our audience with the help of VR technology," said Pan Li, head of the China Media Museum.

Owned by the Communication University of China, the China Media Museum focuses on the development of the country's media industry.

"Items in our exhibition are not something ancient. Most of them are just decades old, but they can evoke the memories and emotions of the visitors because these are related to people's lives in some way, which I believe is the most important meaning of museums," he said.

"Going to museums has become fashionable nowadays as the public has a growing appetite for culture."

To enhance communication with the audience, the Capital Museum will launch "Me and Museum" educational projects, soliciting works such as videos, audio recordings, paintings and photography from the public, and the winning entries will be exhibited at the Capital Museum.

Navigation service provider AutoNavi will also provide descriptions of about 600 items that belong to 20 national museums.

Citizens can open the updated AutoNavi app and listen to the descriptions wherever they are.

Guo Ning, vice-president of the company, said the app can play the role of a "smart carrier" to bring culture to a wider audience.