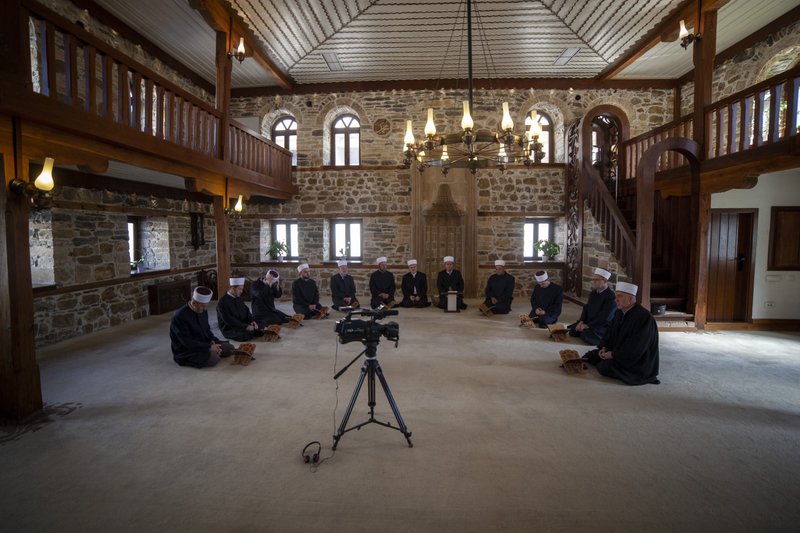 Imams attend the Ramadan prayer at a mosque empty of faithful due to social distancing guidelines during the coronavirus outbreak in Zenica, central Bosnia, Thursday, April 23, 2020. The COVID-19 virus pandemic is cutting off the world's Muslims from their cherished Ramadan traditions. (Photo: AP)

Muslims worldwide began Ramadan on Friday with dawn-to-dusk fasting, but many will have to forgo the communal prayers and family gatherings that make the holy month special, as authorities maintain lockdowns aimed at slowing the coronavirus pandemic.

Ramadan is usually a festive season, with the daylong fast followed by lavish meals and evening get-togethers. But this year many are confined to their homes, travel is heavily restricted and public venues like parks, malls and even mosques are shuttered.

Many are also weighed down by anxiety about the pandemic and widespread job losses resulting from the worldwide shutdowns.

“This is too sad to be remembered in history,” said Belm Febriansyah, a resident in the capital of Indonesia, the world’s most populous Muslim nation.

Jakarta is the epicenter of the outbreak in the country, which has reported more than 8,200 infections and 689 deaths. Passenger flights and rail services have been suspended, and private cars are banned from leaving the city.

Mosques in Indonesia’s deeply conservative Aceh province were packed, however, after its top clerical body ruled that it is not a “red zone” area and that prayers could continue. The province is governed by Islamic law under an autonomy agreement.

The virus causes mild to moderate symptoms in most people, who recover within a few weeks. But it is highly contagious and can cause severe illness or death, particularly in older patients or those with underlying health problems.

The Saudi-led coalition said it would extend a unilateral a cease-fire with Yemen’s Iran-aligned Houthi rebels through Ramadan. Fighting has continued, with each side blaming the other. The Houthi military spokesman, Yehia Sarea, accused the coalition of several violations on Friday, including 35 airstrikes, mostly on the strategic central province of Marib.

Muslim-majority Malaysia extended its own lockdown by two more weeks to May 12, although its daily virus cases have dropped significantly in the past week. The country now has 5,603 cases, including 95 deaths.

Malaysia’s Prime Minister Muhyiddin Yassin said in a televised speech on the eve of Ramadan that the “jihad,” or holy war, against the pandemic has shown results but must continue.

Malaysia, along with neighboring Singapore and Brunei, has banned popular Ramadan bazaars, where food, drinks and clothing are sold in congested open-air markets or roadside stalls. The bazaars are a key source of income for many small traders, some of whom have shifted their businesses online.

In Pakistan, Prime Minister Imran Khan has bowed to pressure from the country’s powerful clerical establishment and allowed mosques to remain open, even as the number of new cases has recently doubled to between 600 and 700 each day. Some clerics have ordered their followers to pack into mosques, saying their faith will protect them.

A key element of Ramadan is charity, with the fast partly intended to cultivate empathy for the needy. But many countries have imposed bans on communal meals, forcing charities to organize home deliveries instead.

In Turkey, authorities have banned the tradition of setting up tents and outdoor tables to provide free meals to the poor. It has also forbidden drummers from going door to door to wake people up for the pre-dawn meal in exchange for tips — another Ramadan tradition.

Last month, Turkey also banned communal prayers in mosques. Health Minister Fahrettin Koca tweeted that the month of Ramadan should not be “an excuse to relax precautions.”

“The month of blessings should not result in illness,” he said.

“Our mosques are deprived of their congregation, like a child who has been orphaned,” he said. “Our hearts are very heavy because of this.”

In war-ravaged Afghanistan, lockdowns have compounded the suffering of the poor.

“The landlord wants rent and the children ask for food, and I don’t have answers for any of them,” Ahmed Shah said as he stood outside a supermarket with a one-wheeled cart, hoping to make money by helping people with their groceries.

Ismatullah, another Kabul resident, said he and his family of five had some bread and tea before the start of the fast. “We do not have anything for tonight,” he said.

More than 1,300 people have tested positive in Afghanistan, and 43 have died.

Ramadan in India, which begins on Saturday, has been marred by the rising Islamophobia following accusations that a surge in infections was tied to a three-day meeting in March in New Delhi of an Islamic missionary group, the Tablighi Jamaat.

Some leaders of India’s ruling Hindu nationalist Bharatiya Janata Party labeled the meeting as “corona terrorism.” As a result, many Muslims have faced renewed stigma, threats and the boycotting of vendors who venture into Hindu-dominated neighborhoods.

The lockdown in India, the world’s most draconian, has multiplied their troubles.

A group of over two dozen Indian Muslim scholars have appealed to their communities to strictly follow the lockdown and pray at home. They also asked Muslims to refrain from organizing large parties held for breaking the fast and “taraweeh,” the extended evening prayers traditionally held in mosques.

“Families should use this unprecedented situation for spiritual guidance and purification,” they said, while asking local volunteers and elders to look after the needy and destitute.

India’s 200 million Muslims, 14% of the population, are the largest minority group in the Hindu-majority nation, but they are also the poorest.