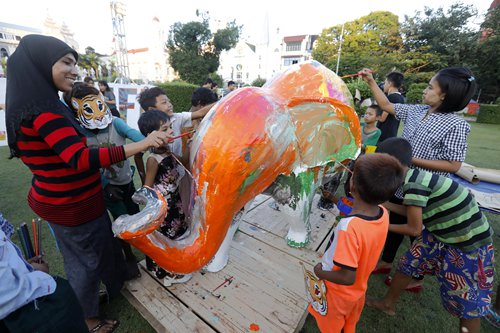 YANGON, Nov. 4 (Xinhua) -- Myanmar has held here an art and music festival Voices for Wildlife, aiming to support the government's combat on illegal wildlife trade as well as to raise awareness of wildlife conservation in the country.

Yangon region authorities have recently announced a ban on all illegal sales across the region, devising Yangon as the first city in Southeast Asia to become "Illegal wildlife trade free" region.

Wildlife trafficking is in fact the fourth biggest transnational crime after drugs, weapons and human trafficking.

"We congratulate the regional government of Yangon on taking this step to end this crime across the region and will continue working closely with the national, regional and state governments to support the roll out of this ban nationwide," Christy Williams, country director of World Wildlife Fund (WWF)- Myanmar told a media conference on the day.

"Our wildlife is our true wealth, more precious than gold and it is our responsibility to protect this wealth, our natural heritage for future generations," said local artist Arker Kyaw.

Meanwhile, local and international non-governmental organizations are accelerating efforts to expand the area of land for wildlife reserve in the country.

The authorities have designated 42 protected areas which accounts for 5.79 percent of total country area so far in Myanmar.

In accordance with the conservation of biodiversity and protected areas law promulgated in May this year, wildlife protection is classified in three levels -- totally protected, normally protected and seasonally protected species.

As part of its efforts to combat illegal wildlife trade, Myanmar ceremonially burnt confiscated ivory and wildlife parts in the capital of Nay Pyi Taw in October.

The public burning of wildlife parts, the first of its kind in Myanmar, has sent a clear message that trade in illegal wildlife parts is unacceptable.

"It is crucial to sustainably conserve our country's natural resources including land, water, forest, mountain and wildlife for the sake of our future generation. We designate and establish protected areas for biodiversity conservation," said Minister U Ohn Win at the wildlife parts destruction ceremony.

In its cracking down on wildlife crime cases, about 284 suspects were arrested in connection with 140 such cases since fiscal year 2016-2017.

The national wildlife enforcement task force, formed in 2016, has been implementing an action plan to combat poaching and illegal trade in cooperation with local and international organizations.

Elephant conservationist U Kyaw Myint Tun was selected as the monthly gratitude honor to the people in July by Myanmar's State Counselor Aung San Suu Kyi for his actively participating in wild elephant protection and conservation.

Joining hands with the authorities in protecting wild elephants from being poached, U Kyaw Myint Tun was awarded the Hero of Elephant Conservation by the WWF and the Friends of Wildlife (FOW).

Two poachers were caught in 2016 with arms used to poach wild elephants, and four guns and materials used to kill elephants were seized in 2017 due to his active cooperation with the government.

Myanmar has signed the Convention on International Trade in Endangered Species (CITES) to protect wild elephants, setting aside 9,205 square miles for elephant sanctuaries.

The government government has also planned to shut down illegal wildlife trade markets in Golden Triangle border region, which is between Myanmar, Thailand and Laos, by 2020 with the help of the wildlife conservation groups.