In the spring of 1968 on Lingshan Mountain in Mancheng County, central China's Hebei Province, a People's Liberation Army troop blew up a slope to dig a tunnel. After the loud bangs, however, a deep, dark cave loomed behind a cloud of dust.

Further into this antre, the soldiers were surprised to find countless ancient artifacts. Construction was stopped immediately, and a few days later an archeological team set off from Beijing to the county.

With iodine-tungsten lamps, the cave was illuminated and brought back to light again. Experts found the interior rock walls were extremely smooth and without weeds, showing they had been deliberately cleaned and polished by humans in the past.

Remnants of horses that were buried post-mortem and chariots were aligned in the first chamber. Based on the remaining bones and metal accessories, experts calculated there were a total of 16 horses and four chariots.

It was not hard to come to the conclusion that the cave hidden in the mountain was an ancient tomb, but who was buried there and how long ago? 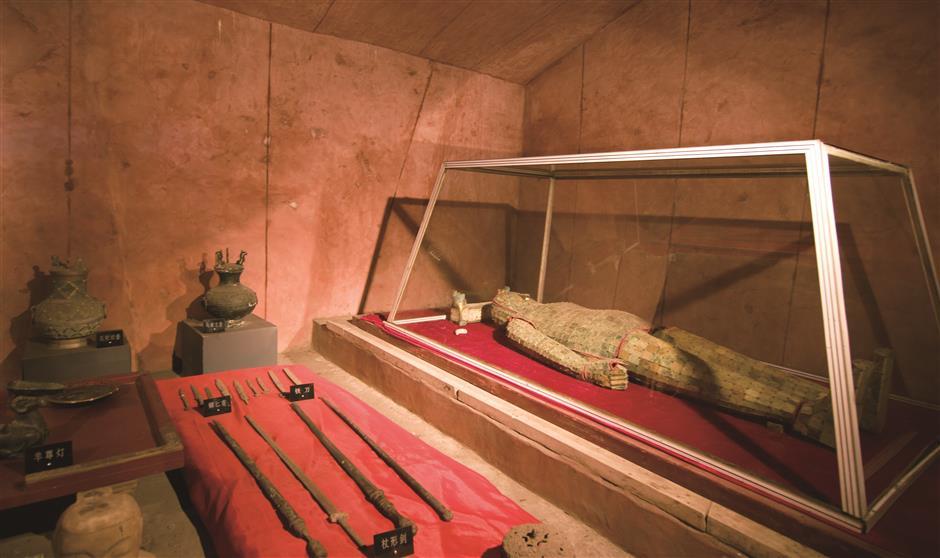 The gold-thread jade suit is unearthed from the tomb of Liu Sheng, a king of the early Han Dynasty (202 BC-220 AD).

One chariot was restored, and it was found to be "An (Safety)" chariot, built only for an emperor, his family and high-ranking officials in ancient China.

A corridor in this chamber's northern tip led to another room, which looked like an enormous warehouse full of hundreds of clay pots and vats to cook food and store fish, meat and liquor, showing the tomb's host must have been an alcoholic and gourmand.

All the way to the west, it extended to a giant ballroom, 15 meters wide, 12 meters deep and 7 meters high. Three zones were divided to store three kinds of utensils for different purposes. The northern zone housed porcelain and lady sculptures, while the southern area had bronze ware as well as bows and arrows. The central zone was the most luxurious, lined with bronze lamps in various shapes and wine sets.

The large amount of rotten wood, broken tiles and bronze joints carved with numbers in the debris showed the ballroom was once a delicate wood-brick construction with a high roof.

Countless old coins were excavated. Judging from their shape and patterns, they were determined to have been used more than 2,000 years ago during the Han Dynasty (202 BC-220 AD). Characters carved on some of the bronze vases clearly showed they belonged to a king of an old kingdom named Zhongshan, a Han territory located in today's Hebei Province.

There were 10 kings of Zhongshan, but which one was the host of this cave tomb? With more studies of the inscriptions on the bronze ware, experts confirmed the mystery king was Liu Sheng, the son of Han's sixth emperor Liu Qi (188-141 BC). 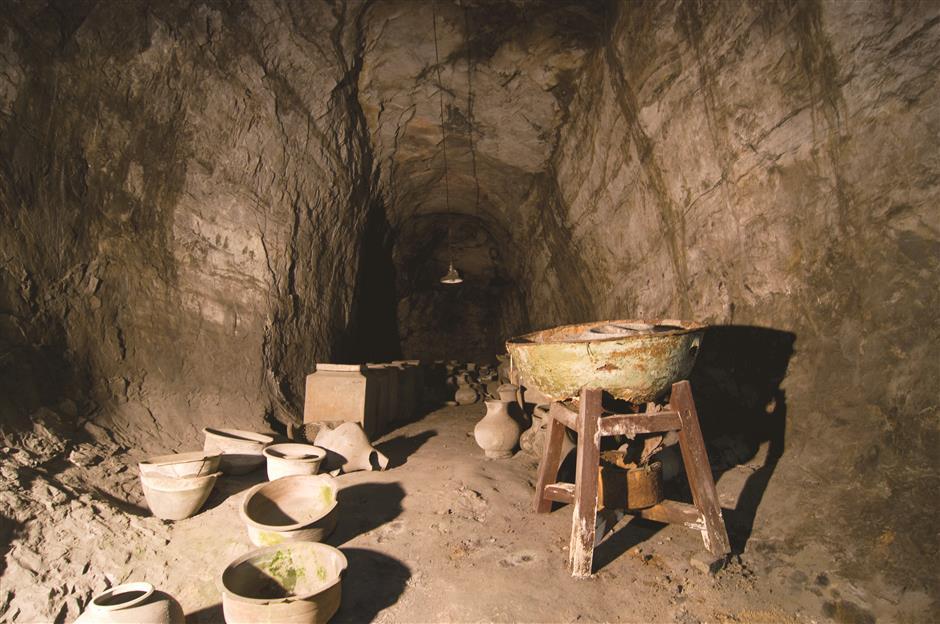 A variety of utensils are found in a giant ballroom in the tomb.

The coffin chamber was found behind a gray stone gate, lavishly painted red. The chamber was a suite with a small bathroom of about 4 square meters. Large bronze pots were probably used for showers. The bedroom housed low desks, lamps and other daily utensils. In the south, there were weapons and armor to protect the king.

The coffin was placed in the north on a jade bed, but it had collapsed at some point over the previous 2,000 years, and was covered with a thick layer of rotten wood and smashed lacquer.

Under the debris, experts discovered a striking relic that astonished the entire world – an intact jade suit sewn with gold threads, the first time a gold-wired jade suit had been unearthed. Prior to the discovery, the suit was but a legend in old books.

The 1.88-meter-long suit was linked by gold threads with more than 2,000 jade chips, shaped like a man with a head, body, limbs and shoes.

During the Han Dynasty, people believed jade could keep a corpse from decomposing. However, jade was not for everyone; only emperors and his cousins had the privilege. According to the law of the Han, there were strict distinctions for different ranks' use of threads on burial jade clothes – gold threads for an emperor, silver for vassal kings and copper for an emperor's sisters.

But Liu was only a vassal king, apparently unqualified to use gold threads. Experts invited historian Guo Moruo (1892-1978), president of the Chinese Academy of Sciences, to the excavation site. After careful archival research, Guo found the law for jade burial coats was strictly enforced in the middle and late Han Dynasty, but Liu lived during the early Han period when enforcement was more lax.

After months of excavation, more than 10,000 artifacts were found, 4,000 of which were delicate jade ware, bronze ware and gold and silver accessories. The jade-gold suit, a bronze palace lantern and a mountain-shaped incense burner were said to be the three most beautiful discoveries.