Myths about immortals attract tourists to coastal city of Yantai 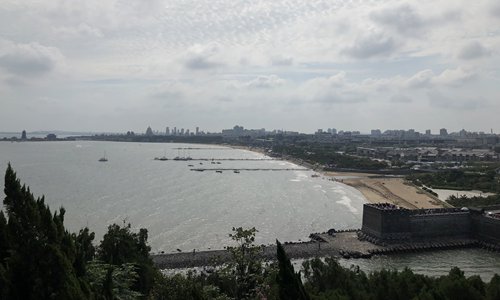 A view of Penglai Watertown in Yantai. (Photos: Global Times)

In the minds of many Chinese, Yantai in Shangdong Province is a city strongly connected to the legendary Eight Immortals. In the legend, each of the immortals uses their unique powers to depart from Yantai to travel across the Bohai Sea to attend the Conference of the Magical Peach on the magical Mount Penglai. Yantai's connection to this myth is so strong that the county-level city in the northern part of Yantai is named Penglai. Today, however, Yantai offers far more to modern visitors than stories about legendary figures. In search of immortality As early as China's first empire, the Qin Dynasty (221BC-206BC), the legend of immortals living on Mount Penglai had become so popular that even the first emperor Qin Shi Huang gave his court sorcerer Xu Fu a fleet of ships, along with 500 boys and 500 girls, so the latter could explore the seas around this coastal city in search of the elixir of life. Following Chinese emperors also believed in the myth so deeply that one by one they too visited Yantai in the hopes of becoming immortal. The connections to these legends and history mean the city boasts a number of tourist spots related to Eight Immortals, such as the Penglai Pavilion, one of China's Four Great Pavilions. The pavilion is actually a compound that includes a number of buildings, temples and smaller pavilions, most of which were built during the Song Dynasty (960-1279). The pavilion is a well-known location for observing the frequently occurring mirages that take place along the horizon where the sea meets the sky. The pavilion has witnessed a number of long-lasting superior mirages, including three in 1988 that occurred within six hours of each other.  After climbing up the brick stairs to the pavilion, travelers are greeted with an overview of the bay and, if the sky is clear enough, the nearby Changdao Island. Another unusual sight that can be seen from the pavilion occurs along the boundary of the Yellow Sea and Bohai Sea. Looking out at the ocean, one can see a dividing line where muddy yellow water, created from sediment carried out to sea from the Yellow River, meets up with clear blue water from the Bohai Sea.  Also called Dengzhou in ancient times, the city of Penglai has served as an important port throughout Chinese history for diplomats and cultural ambassadors from ancient kingdoms in Korea and Japan. Ancient ships unearthed in Penglai in 1984 provide evidence of the frequent cultural communication and trade among these nations.  The Penglai Ancient Ship Museum, built over the excavation site of the four Ming Dynasty (1368-1644) ships, not only offers visitors a chance to look back at the past glory of Penglai as a major port, but also showcases how the city tied Korea and Japan into the ancient Maritime Silk Road. The remains of the No.3 Ancient Ship is a big highlight as it remained relatively intact. A great example of collaboration between ancient cultures, the ancient Korean cargo ship was built using a typical Korean style from the bow to the rear, but interior design and craftsmanship are mainly Chinese.  At about 32.2 meters in length and six meters wide, the No.1 Ancient Ship is one of the longest ancient ships ever unearthed. A battleship designed for war, it was built using various advanced technologies including watertight compartments. Wine paradise Even if you are not a wine lover, you may have heard of Changyu wine, one of China's earliest grape wines. Since Yantai is not known for its vineyards, visitors may wonder why Changyu wine got its start in the city. For those who seek an answer, the local Changyu Wine Culture Museum is an excellent place to visit. According to the museum, Changyu wine got its start during the Second Opium War in 1860, when French soldiers entered Yantai and began to produce wine for their own use. On one occasion, Chang Bishi, a patriotic leader of overseas Chinese, by chance heard from a French consulate in Indonesia that Yantai enjoys geographical and climate advantages when it comes to wine. Seeing the start of a great opportunity, Chang later traveled to Yantai and acquired a large vineyard. Hiring European wine makers, he established the Changyu brand in 1892.  Due to the vineyard's high-quality grapes and advanced wine making techniques, Changyu wine became a huge success. In 1915, four Changyu wines won gold medals and the prime quality certificates at the Panama-Pacific International Expo. At the museum, you can visit the Grand Cellar, a storage area nearly 2,000 square meters in size. The still-in-use cellar holds thousands of small oak barrels as well as three large ones. Another popular site in the city is Yangmadao, an island where Qin Shi Huang supposedly kept his battle horses. The site is so popular on China's short video platform Tik Tok, or Douyin, that it is often called the Chinese Maldives for its clear waters and wonderful beach views. You will have to be patient though if you want to step foot on the small island as crowds can reach up to 50,000 visitors during peak season, which slows down traffic considerably.

Cover photo: A gate at the Penglai Pavilion in Yantai