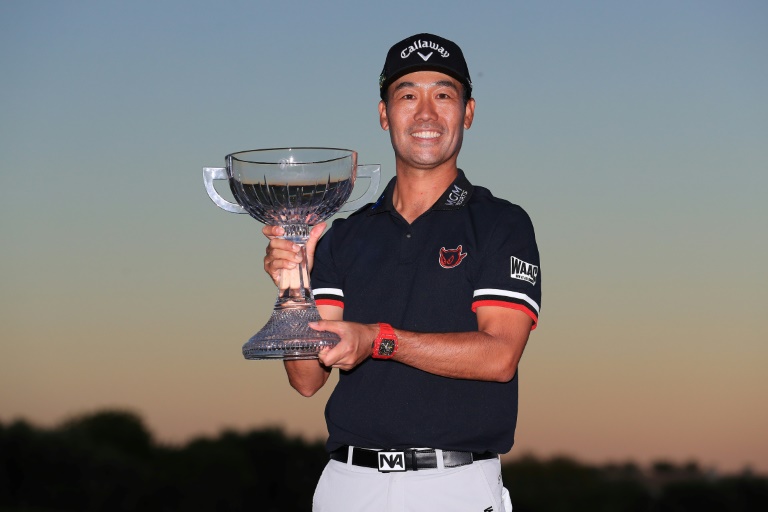 Korean-born American Kevin Na celebrates with the trophy after winning the US PGA Tour's Shriners Hospitals for Children Open at the second playoff hole in Las Vegas.  (Photo: AFP)

Kevin Na made it closer than it had to be, but shook off a triple-bogey to beat Patrick Cantlay in a playoff Sunday to win the US PGA Tour Shriners Hospitals for Children Open for the second time.

Korean-born American Na, who won his first tour title on the same TPC Summerlin course in Las Vegas in 2011, captured his fourth with a gritty finish as the shadows were starting to fall.

After both birdied the first playoff hole, Na sealed it with a par at the second extra hole, where Cantlay left his birdie putt nearly six feet short before Na hit his four feet past.

Cantlay ended up with a three-putt bogey while Na rolled in his par attempt for an emotional win.

"I've lost three playoffs," Na said. "This is my first playoff win. I kept telling myself 'This is a playoff that I'm going to win."

Na, who took a two-shot lead into the final round after three rounds of spectacular putting, looked headed for a much easier victory after birdies at the sixth and seventh -- where he rolled in a 27-footer.

He bounced back from a bogey at the eighth with a birdie at the ninth, where he got up and down from a greenside bunker.

But a poor tee shot at the 10th led to a triple-bogey seven. He remained one shot in front of Cantlay only because Cantlay also bogeyed 10.

Both players birdied the 12th, 13th and 15th before Cantlay took a one-shot lead with a birdie at 16, where Na was in the water on the way to a bogey.

It was Cantlay's turn to find the water at 17, where Na drained a 23-foot par saving putt that sent them to the 72nd hole tied on 23-under.

"Came down way too close," Na said. "I had a comfortable lead, I felt really comfortable. I hit a bad tee shot, got unlucky and made a triple and all of a sudden I felt like I was the underdog.

Cantlay, who won the Las Vegas title in 2017 and finished runner-up last year, said his six-footer for par at the second playoff hole "broke a little more than I thought.

"The first one was really slow," added Cantlay, who said he couldn't be too disappointed with his week.

"I played really well," he said. "I had a lot of putts I thought were going to go in today that didn't. All in all I'm playing really well and I'll take that momentum into next week."

American Pat Perez finished alone in third on 263 after a three-under 68. Defending champion Bryson DeChambeau fired a 63 to head a group on 264 that also included Canadian Adam Hadwin and American Brian Stuard.