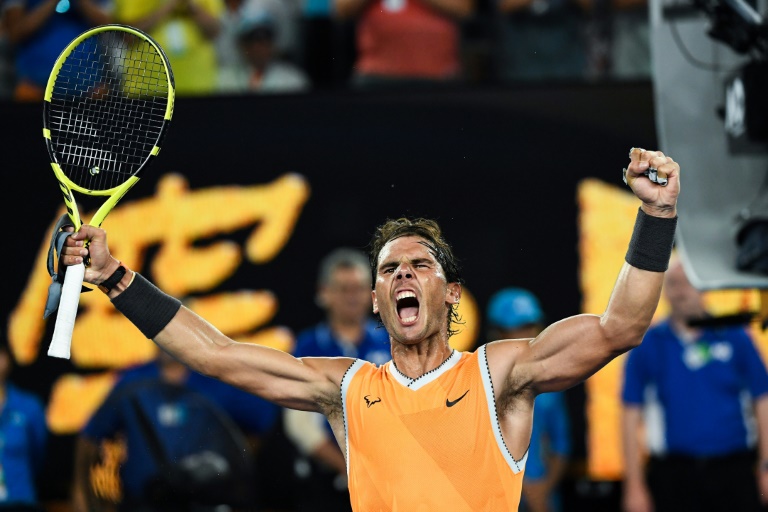 Nadal has not lost a set at the tournament in reaching the final. (Photo: AFP)

Rafael Nadal said he has surprised himself with his outstanding level of tennis at this year's Australian Open after crushing Stefanos Tsitsipas in the semi-final on Thursday.

Greek 14th seed Tsitsipas had enjoyed a fairytale run to his first Grand Slam last four, including a win over Roger Federer, but found Nadal in ruthless form in the Spaniard's first tournament since the US Open in September

"Is not easy to be back after four months, five months, and play the way I am playing," he said after undergoing ankle surgery in his extended off-season.

"Of course, I didn't expect that at all," Nadal told reporters after setting up a final Sunday against either top seed Novak Djokovic or Lucas Pouille.

"You don't need that many matches to play well. That's something that happened for the last two years for me."

The Spanish second seed has not dropped his serve for an astonishing 63 straight games and has not lost a set.

"I played well, of course. Have been playing well during the whole event. Every match more or less I think I did a lot of things well. Tonight was another one," he said after a breathtaking display of almost perfect tennis.

"Probably the backhand was better today than the rest of the days.

"That's important for me, too, because the forehand was working fantastic during the whole week, week-and-a-half, but the backhand was improving during the tournament.

"Tonight was even better than the previous rounds, no?"

Tsitsipas, 20, had been hailed as a new young Greek god of tennis after beating Federer, but his ascent to the summit of his personal Olympus was comprehensively halted by the colossus called Nadal.

"I have no idea what I can take from that match," said a despondent Tsitsipas. "I wasn't even close to getting something. I only got six games."

Nadal's win put him into his fifth Australian Open final and keeps him on course to become the first man to win all four Grand Slams twice in the Open era if he can add to his sole Melbourne Park crown in 2009.

Tsitsipas, in just his second Australian Open and seventh appearance at a Grand Slam, was looking to become the first Greek player -- man or woman -- to reach a final in a major.

"He has everything to become a multi-Grand Slam champion," Nadal said graciously of the young Greek, who enjoyed a breakthrough 2018, winning the ATP Tour NextGen Finals.

Nadal, who shattered the dreams of two other NextGen stars 19-year-old Alex de Minaur and 21-year-old Frances Tiafoe by jumping all over their serves early, made another immediate statement.

At 1-1 a rasping double-handed backhand and a forehand winner gave him a first break point which the Spaniard duly converted. Another followed as he cruised to the set just 31 minutes.

The second stanza was on serve at 2-2 when Nadal pulled off the shot of the tournament, a running forehand around the net post from almost behind the umpire's chair on his way to earning three break points.

And the great Spaniard was in no mood to hang about at the start of the third, breaking Tsitsipas not once but three times to inflict a humiliating 6-0 "bagel" on the youngster in a further 31 minutes.