Nationals fans rejoice in red as hometown heroes are honored 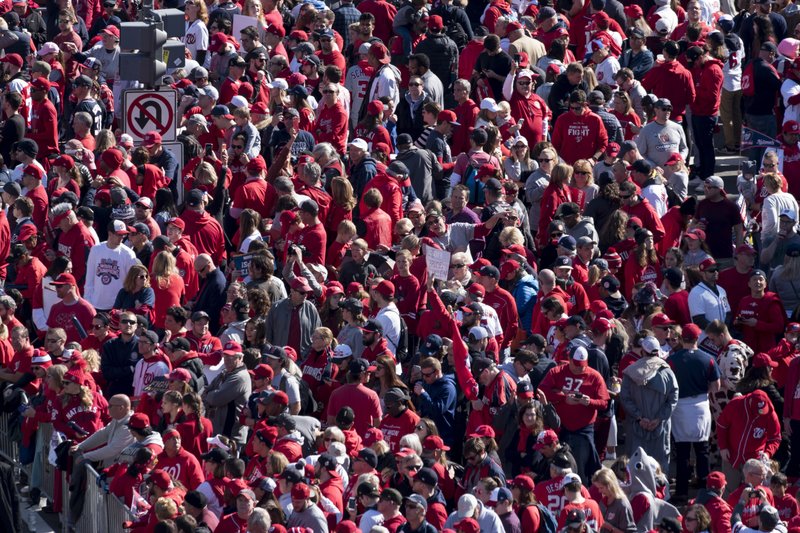 Fans wait for the start of the MLB Washington Nationals celebration of the team's World Series baseball championship over the Houston Astros, in Washington, Saturday, Nov. 2, 2019. (Photo: AP)

“Baby Shark” blared over loudspeakers and a wave of red washed across this politically blue capital Saturday as Nationals fans lined the city’s version of the Canyon of Heroes to rejoice in Washington’s first World Series victory since 1924.

“We just felt it was a once-in-a-lifetime experience,” said Bridget Chapin, who came from Burke, Virginia, with her husband, Mark, for the parade along Constitution Avenue and the ensuing rally a few blocks from the Capitol.

Nick Hashimoto of Dulles, Virginia, was among those who arrived at 5 a.m. to snag a front-row spot. He brought his own baby shark toy in honor of backup outfielder Gerardo Parra’s walk-up song, which began as a parental tribute to the musical taste of his 2-year-old daughter and ended up as a rallying cry that united spectators at Nationals Park and his teammates.

As “Baby Shark, doo doo doo doo doo doo” played on a crisp morning, early risers joined in with the trademark response — arms extended in a chomping motion. Chants of “Let’s go Nats” resonated from the crowd hours before they were to hear from the team.

The Nationals were expected to get a hero’s welcome home from tens of thousands of people in a city that had thirsted for a baseball champion for nearly a century. The Nationals gave them that by winning in seven games over the Houston Astros; the clincher came on the road Wednesday night.

“I just wish they could have won in DC,” said Ronald Saunders of Washington, who came with a Little League team that was marching in the parade.

The crowd along the route was deeply packed, more people were streaming in and there were red streamers, hand towels and signs that said “Fight Finished.”

“When they tell you dreams come true, point them toward our @Nationals,” Mayor Muriel Bowser tweeted after Game 7. “Tell them they do.” She included the hashtag SportsCapital, a reference, too, to the Washington Capitals’ Stanley Cup championship in 2018 and the Washington Mystics’ WNBA championship this year.

President Donald Trump has invited the Nationals to the White House on Monday, though relief pitcher Sean Doolittle doesn’t plan to attend.

“There’s a lot of things, policies that I disagree with, but at the end of the day, it has more to do with the divisive rhetoric and the enabling of conspiracy theories and widening the divide in this country,” Doolittle told The Washington Post.

But to fan Bridget Chapin, “Regardless of how you feel, you go to the Oval Office. I’m really weary of athletes making political statements. I watch sports to get away from all that.”

The president attended Game 5 in Washington and was greeted with loud boos when he was shown on the giant video screen during a tribute to veterans. The boos more than overwhelmed a scattering of cheers.

Delores Smith of Washington, a longtime baseball fan who said she had an uncle who pitched in the Negro Leagues, said the World Series was “a big win” for the city. “This is the first time in a long time that I’ve seen the whole city come together. There’s no fussing about Trump.”

In a city divided by politics, race and economics, the Nats were something of a unifier — at least for the time being — as partisans and nonpartisans alike openly congratulated one another on their team’s win.

Even with the threat of stars leaving for free agency — as outfielder Bryce Harper did after 2018 — fans hoped the Nationals’ success would continue.

“I don’t think it’s going to be our last time. This team, even when our last superstar left, this team rallied around, they played as a team,” Stokes said.