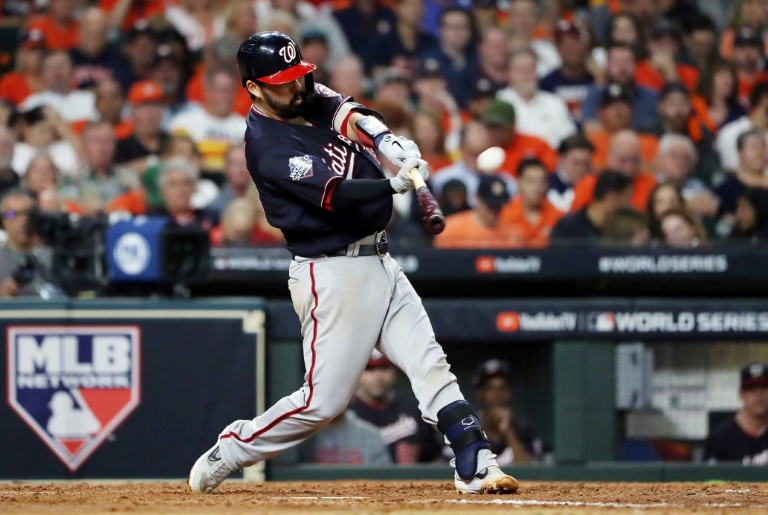 Powered by a devastating six-run seventh inning, the Washington Nationals seized command of the World Series by routing Houston 12-3 Wednesday, moving halfway to the US capital's first title since 1924.

"We know the series isn't over," said Washington's Anthony Rendon. "To steal two games from them at their home field is great but we still have a job to finish and we still have two more to go."

"The homer was great," said the first Hawaiian with a World Series homer. "Any way you can help the team, good things will happen.

"I've waited 13 years for this. It pumps you up, especially how long I waited to get to play a World Series game."

The scene shifts to Washington for Friday's game three, the first World Series matchup in the US capital for 86 years.

"Clearly the Nats have outplayed us, bottom line," Astros manager A.J. Hinch said. "They are halfway to a race to four wins. Clearly game three is very important for us.

"I don't think they are going to be planning the parade. They know we're going to make them fight for it."

The Nationals, who have won eight games in a row and 18 of their past 20 games, began play 50 years ago as the Montreal Expos before moving to Washington for the 2005 season.

Washington's only World Series crown came 95 years ago when the original Senators defeated the New York Giants in seven games. They would relocate to become the Minnesota Twins in 1961 and a replacement version would leave after the 1971 season to become the Texas Rangers.

The Nationals could match the 1914 Boston Braves as the only teams to win the World Series after falling 12 games below .500 during the season.

Strasburg, a 31-year-old righthander, struck out seven while allowing only two runs on seven hits and a walk in improving to 4-0 in the playoffs.

Verlander took the loss for Houston, his fourth in six World Series starts, and fell to 1-4 in this year's playoffs.

Deadlocked 2-2 after six, the game turned thanks to unlikely heroes.

"I brought Press in to give them some different looks," Hinch said. "I thought it was the best chance to limit their scoring. Instead it threw gasoline on the fire."

The Nationals, the most prolific scoring team when down to their final out in an inning, made the magic happen again with devastating results.

Howie Kendrick's infield single plated a run. Cabrera brought in two more with a single up the middle. Ryan Zimmerman's single and an error by Alex Bregman made it 8-2.

"We didn't make a couple plays," Hinch said. "Then they made soft contact in a couple of at bats and the inning is out of control."

Eaton hit a two-run homer, Cabrera added a run-scoring single and Taylor and Houston's Martin Maldonado added solo homers in the ninth for the final margin.

Rendon's two-run double to left field and Bregman's two-run homer for Houston left the game knotted 2-2 after the first inning.

Houston's Jose Altuve reached base in his 22nd consecutive playoff game with a first-inning double but was thrown out trying to steal third base.

Verlander struck out Robles in the second inning for his 200th career playoff strikeout. That broke the old record of 199 set by former Atlanta pitcher John Smoltz.