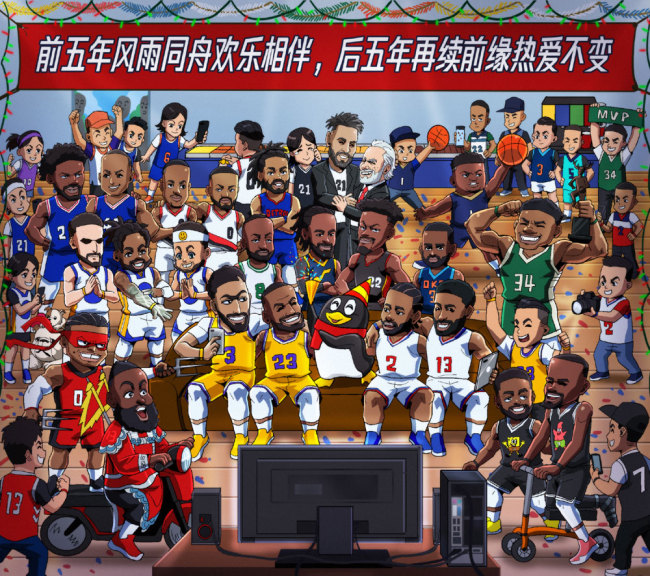 The National Basketball Association (NBA) and China's Tencent, the Exclusive Official Digital Partner of the NBA in China, have expanded their partnership to 2025. (Photo: China Plus)

The National Basketball Association (NBA) and Tencent Holdings Limited, the Exclusive Official Digital Partner of the NBA in China, announced a five-year expansion of their existing partnership today that will see Tencent - the NBA's largest partner outside the U.S. - provide extensive NBA coverage on its platforms through the 2024-25 NBA season, including live NBA games, NBA programming and interactive fan experiences.

Tencent, the digital media partner of the NBA in China since 2009, has streamed full seasons of live NBA games and content to its hundreds of millions of daily users under the current partnership that began in 2015. Tencent and the NBA also jointly manage and operate several other NBA services and activities in China, including NBA-themed mobile games, NBA social media accounts, and interactive fan events.

Under the expanded partnership, live NBA games, video on-demand (VOD) and short video content will be available for fans through Tencent's digital and social media platforms including QQ.com, Tencent Sports, Tencent News, Tencent Video, QQ, WeChat and Weishi. Tencent will also collaborate with the NBA to develop innovative advertising products, and launch and operate "mini programs" for mobile devices, including the NBA's fan loyalty program in China: NBA Qiu Mi Quan (QMQ). In addition, Tencent will leverage its consumer insights to help the NBA expand its fanbase in China and provide the league's global fanbase with new, customized interactive services.

"Tencent's commitment to NBA basketball in China is unparalleled," said NBA Commissioner Adam Silver. "The enormous reach and popularity of Tencent's platforms have been a driving force behind the growth of basketball in China, and we look forward to deepening our connection with NBA fans across the country through this expanded partnership."

"We believe that the enhanced partnership between the NBA and Tencent will take our phenomenal success to new heights," said Tencent President Martin Lau. "Empowered by our technology capabilities, interactive platforms and content expertise, we will work closely with the NBA to further engage fans in China with sports excitement and technology innovations to elevate the passion for basketball, and to promote a healthy and active lifestyle."