NEW YORK, Feb. 6 (Xinhua) - The New York Knicks staged a Lunar New Year celebration as the team took on Blake Griffin and the Detriot Pistons for the first match of a home-and-home on Wednesday. 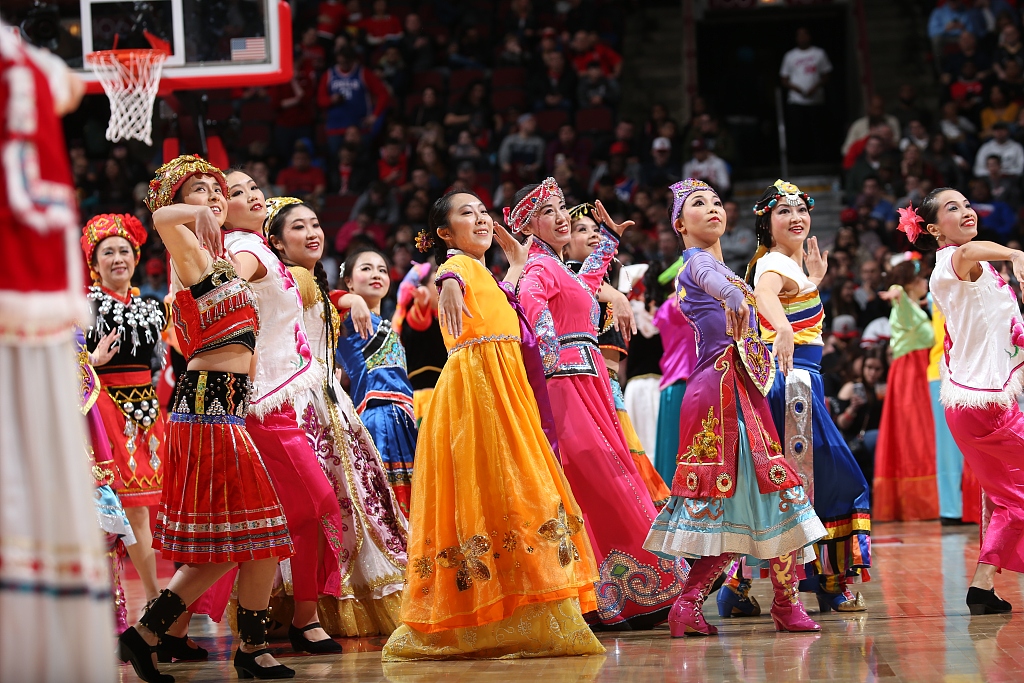 During the game at Madison Square Garden, spectators received giveaways including traditional red envelopes as well as pig dolls as the team celebrated the Chinese Lunar New Year of the Pig. Red envelopes are a traditional Chinese New Year gift symbolizing good fortune. A spectator won 600 U.S. dollars during a game called 'Name the Pig.'

Wednesday night’s event is the second time that the Knicks have celebrated Chinese Lunar New Year since 2018.

Traditional dragon and lion dances were performed during halftime, and a qipao show was also staged during the cultural presentation.

Deputy Consul General of Consulate General of China in New York Qian Jin attended the event, and said it reflected the history and culture of a country that is home to many passionate NBA fans.

"We hope that the China Night event can help further promote culture exchanges and enhance the mutual understanding and friendship between China and the United States," Qian told Xinhua during the event.

The Chinese New Year is a traditional celebration of the first day of the Chinese lunar calendar, which falls on February 5 this year. 2019 is the Year of the Pig, just as it was exactly 24 years ago, when Knicks player Noah Vonleh was born.

Vonleh scored seven points, had five rebounds in the home team's 105-92 loss to the Pistons.

The Knicks Chinese New Year uniform featuring the team’s name in Chinese was a popular item at the Madison Square Garden gift shops.

Naji Abdeldayen, a Knicks fan from Brooklyn, posed for photos with the uniform after the game. "I really like this uniform and I want to wish a very happy Chinese Lunar New Year to Chinese NBA fans," said Abdeldayen.

The Knicks Chinese New Year celebration is part of an NBA league-wide initiative to pay tribute to its biggest international fan base.

The Cleveland Cavaliers, one of the most popular teams in China, also hosted a Chiense New Year celebration yesterday during their game against the Boston Celtics. The Quicken Loans arena was decked out in red and gold, and a Chinese acrobatics duo took to the court to perform at halftime.

Other activites at this particular celebration included an interactive Chinese cultural exhibit hosted by the Confucius Institute of Cleveland State University, Chinese New Year snacks sold at concessions, and a Chinese-themed cheerleading performance.

Events like the Lunar New Year celebrations are an example of how the league aims to tap into the growing sports consumer market in the world's most populous country. As China's middle class continues to grow and its spending power increases, NBA sides are sparing no efforts to reach out to this large potential consumer base.