China issued 336,000 foreigner's work permits and more than 950,000 foreigners worked in the country in 2018, which shows that China is becoming an ideal place for innovation and entrepreneurship for foreign talent. 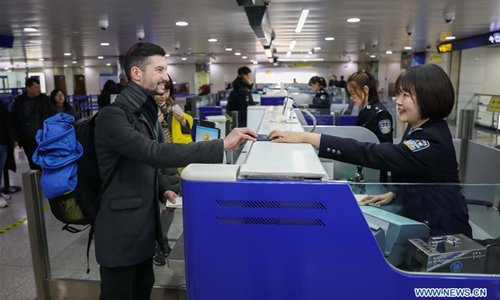 China now need talent more than ever, because the most important thing about technology cooperation and communication is the exchange of talent, Wang Zhigang, minister of Science and Technology, said at a Sunday conference in Shenzhen, Guangdong Province, the Xinhua News Agency reported.

"I thought China would be a cool place to work considering that it is a fast-growing major market, so I decided to come and work here," said Mukesh, an Indian national who works for a Beijing newspaper on Sunday, adding that China has to be made more expat friendly with better integration processes and the wider use of English.

However, the government also warned that it would impose strict regulations on the entry of foreigners due to recent cases of crimes committed by foreigners, such as illegal English teachers, Chu Zhaohui, a senior researcher at the National Institute of Education Sciences, told the Global Times on Monday.

According to a previous report by the Global Times, four suspects were prosecuted in Southwest China's Chongqing Municipality in February for helping foreigners from non-native English-speaking countries and with no English teaching background illegally come to China and teach in schools.

A visa regulation for foreigners who intend to work in China took effect on January 1, 2018. Foreign employees are divided into three categories: A, B and C based on one's salary in China, educational background, Chinese language proficiency level, age and location. The rules, which apply to type A employees, have offered a more open and effective way for top professionals to apply for a visa and work in China.